There are days where life comes along and kicks you in the teeth, and that was yesterday.

I’m trying to remind myself that I’m fine, everyone is fine, I still have my good job and a roof over my head, but my faith in humanity has been drained. A lot.

So what do you do a day later, which happens to be your day off? You spend most of the morning reading in bed, and then spend the last hour of it reading on the couch. It can’t erase what happened, but it did get my mind off of local events and help me to relax, as well as ticking two books off my ‘To Read’ list.

The first was Nina Sankovitch’s Tolstoy and the Purple Chair. After her older sister dies at age 46, Sankovitch, a lawyer turned stay-at-home mom of four, decides to spend a year reading one book per day as a way to deal with her grief. Admittedly, it was a crazy challenge and there was more than one point where Sankovitch started reading a two hundred page book after 9 o’clock p.m., but managed to complete her challenge in spite of crazy family schedules, nursing a sick child, and summer travel. During that year, she learns to let go of her guilt and accept that sorrow is part of dealing with the death of a loved one.

I have written before of my love of books about books. I’m not sure if I understand why they are so appealing to me, and I honestly don’t care. Like hot chocolate or my favorite breakfast cereal, they’re a comfort I indulge in when life gets a little stressful.

Two more things about Sankovitch, by the by: the first is that I read Tolstoy and the Purple Chair across two days, but within 24 hours, kind of like Sankovitch in the book. The second is that I now want to read another of her books, Signed, Sealed, and Delivered, which is about the joys of writing letters. I found it while perusing her site, readallday.org. 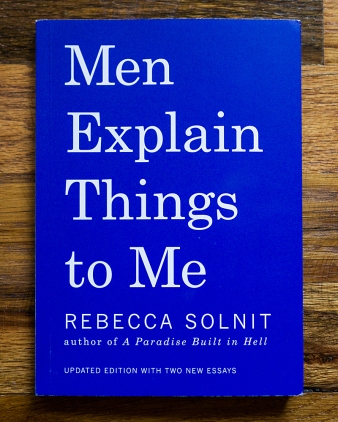 The second book I finished this morning was Rebecca Solnit’s Men Explain Things to Me, a series of essays regarding feminism, how the feminist movement has changed from the 1960s and 1970s to now, and how women are still so often silenced, either through violence or by men talking over them or disregarding or discrediting their ideas altogether.

I was hooked by the end of the first essay, which begins with Solnit recounting an evening when she and a friend attended a fancy party with a bunch of important people (or people who thought they were important). They were about to leave when an Important Man drew them into a conversation, but left little room for them to talk. When Solnit finally got a few words in, she mentioned a book she had written about Eedweard Muybridge, at which point the Important Man interrupted her to talk about this major new work about Muybridge that had recently been highly reviewed by the New York Times. He droned on and on about it, until Sonlit’s friend finally got through to him that Solnit had written the very book that he was going on about, and that she was, in fact, quite knowledgeable on the subject of Muybridge and his photography.

Though the essay began with an amusing anecdote, it took a darker turn as the discussion moved from the Important Man to the fact that men talking over women and not taking their voices seriously is a ridiculously common occurrence that has been going on throughout history, and too often leads to women keeping their thoughts to themselves.

After reading the second essay, I wanted to buy a copy of this book for just about everyone I’ve ever met. You should go out and buy one for yourself. Read it. Think about it. Then act on it.

In other news, I have gotten myself hooked on The British History Podcast, which deals with – surprise!- the history of Britain. Jamie, the show’s host, starts way back during the Ice Age, when people were just starting to wander from continental Europe to the British Isles, and goes forward from there. The pre-Roman history is spotty at best, since the British tribes had an oral culture that was destroyed by the Romans, but Jamie does the best that he can, telling the stories of famous figures like Julius Caesar and Boudicca without skipping over cultural happenings and the lives of the common people.

Seriously, I’m hooked. I listened to it for about four hours on Sunday.

Other sites I’ve been enjoying recently:

Signature- Making Well-Read Sense of the World – Featuring articles about books, movies, culture, and the news.

The Well Appointed Desk – Who doesn’t love a blog about office supplies?

Craft & Vision – A photography site that features articles about the craft of photography, and not so much the gear that goes into it. Several people write and offer books, but the one whose work has helped me improve my photography the most is David duChemin. If you love photography, but want to improve in ways beyond the technical aspects, check out his articles on the subject.