I was browsing through my library’s selection of ebooks, looking for travel memoirs in particular, when I came across Traveling with Pomegranates, by Sue Monk Kidd and her daughter Ann Monk Kidd. It was, in part, due to the Pop Sugar reading list- ‘a book involving travel’. I have to say that I didn’t look at the synopsis very closely, as I thought it would be a lighthearted tale of a mother daughter and their travels in Europe. It was, as it turns out, much deeper than that and did not deal with any kooky misadventures.

Ann, on the other hand, is trying to figure out what to do with her life now that she is out of college and is preparing for graduate school, and the rejection from the program of her choice. She traveled to Greece for a class a year and a half before the book opens, and her experiences helped accept herself as an individual person (and not simply as a girlfriend). During this second trip to Greece, though, Ann is dealing with rejection and Depression.

Throughout the book, there are discussions of the ancient Greek myth of Persephone and Demeter, as well as the Virgin Mary, and how those stories factor into Sue and Ann’s thoughts as they face their individual futures, and ultimately both tales help them come to terms with aging, rejection, and the next phases of their lives.

While this books was not as inspiring to me as, say, Cheryl Strayed’s Wild (which helped me find the courage to stop waiting for my friends to go traveling with me, and just go), but it is a beautifully written story about facets of womanhood that are often neglected in modern narratives, especially Sue’s story of facing old age.

I’ve been reading Jason Porath’s Rejected Princesses a few stories at a time (each woman has a two to three page biography. I’ve encountered a few women I had already knew about, such as Grace O’Malley and Sybil Ludington, but most of these stories are new to me, and span both history and the globe. I’m about fifty pages in, and I already love this book! 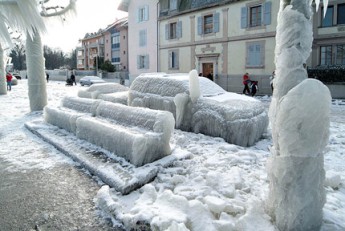 I think they’re afraid of something like this happening.

The weather people have been predicting an ice storm for the past several days, and everyone in town has, accordingly, gone into survival mode. The grocery stores have been swamped, and the shelves are bare of things like bottled water, bread, and soup. So far, though, nothing has come of it. We’ll see if that changes over the next few hours, but it’s supposed to be lovely on Wednesday, so I’ll be interested to find out what people end up doing with the half-dozen loaves of bread they bought in order to survive the next thirty-six hours.

I’m baking a pumpkin pie in order to prepare. My apartment smells wonderful.

Coming up next (if I can get to it all before the library comes calling..)
– My Brilliant Friend by Elena Ferrante
– No Baggage by Clara Bensen
– A Room of One’s Own by Virginia Woolf

My book selections have become dominated by women of late. Not by any method, but by happenstance. It’s fantastic.