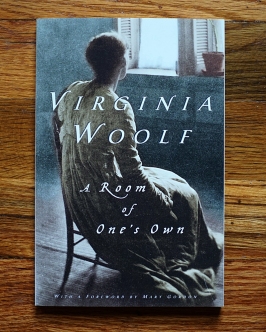 In A Room of One’s Own, Virginia Woolf theorizes what might have happened to Shakespeare’s sister. Not necessarily a blood relation of the bard, but a women of equal talent and wit living at the same time. Would she have achieved the same success and literary immortality?

No, Woolf decides. She would not have. Shakespeare’s sister, having escaped an unwanted marriage, might have slipped away to London and attempted to find employment at a theater– much as Shakespeare did– and begin a career of writing. But her pursuit of her dreams would have ended just inside the door. She might have taken up with the theater’s manager, found herself pregnant, and killed herself soon after and been buried at the crossroads nearby. Her talent would have been lost, and world will never know what she might have achieved simply because she was not born male.

Society can be ridiculous, can’t it? How many writers, artists, scientists, etc. has the world not known simply because they women? It’s a black mark against the human race that half the world’s population has been reduced the second class, its ideas and minds disregarded simply because they happen to be women.

“Possibly when the professor insisted a little too emphatically upon the inferiority of women, he was concerned not with their inferiority, but with his own superiority. That was what he was protecting rather hot-headedly and with too much emphasis, because it was a jewel to him of the rarest price.”
― Virginia Woolf, A Room of One’s Own

Things have gotten better. Woolf recognized this fact and commented on the blossoming of talented women in the nineteenth century. She also suggests that one hundred years from then (in this case, 1929), there might be an equal number of books by women on library shelves as books by men, as well as many women authors of great renown.

Well, it hasn’t quite been one hundred years since then, but much of Woolf’s prediction has come true. It’s not unusual for women to win literary prizes or top the bestseller list. But all too often, women’s literary contributions are regarded as “women’s lit” or worse, “chick lit”, degrading names that denigrate their stories.

It’s getting better. With every passing year, women’s contributions are held in higher regard, but there is still a long way to go.