If you do a friend a favor, you might end up reading Star Wars books.

The friend in question is a school librarian, and a publisher sent her a large selection of books to read and review. Whichever of the books she reviews, she gets to keep for her school’s library. It’s a wonderful opportunity for a poor school, as their budget is extremely tight and she doesn’t always get to buy as many books as she would like. Naturally, she asked her book-loving friends to lend a hand.

I got the Star Wars chapter books. 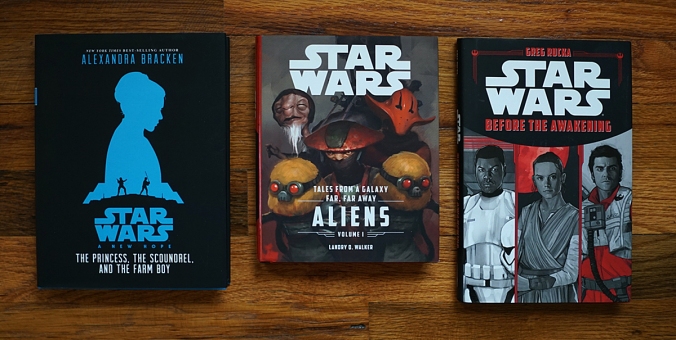 Before the Awakening and The Princess, the Scoundrel, and the Farm Boy are each books in three parts, with short stories about the main characters– Leia, Han, and Luke in one book, and FN-2187, Rey, and Poe Dameron in the other– leading up to the films, A New Hope and The Force Awakens.

I finished Before the Awakening in short order. FN-2187’s story helped to explain his actions in the film, while Rey’s story fleshed out her character and gave a reason for her myriad technical skills, such as her ability to pilot and fix ships. Poe’s story fills out the conflict between the First Order and the Resistance as much as his own background. As the book is meant for kids (the publisher’s note indicates grades 3-6), the writing is not terribly complex and there isn’t much exposition, but that’s alright. It’s still a fun read if you’ve already seen the Star Wars films and want to read more about the characters between now and when The Last Jedi premiers.

The Princess, the Scoundrel, and the Farm Boy is set up the same way as Before the Awakening, but I’m only partway through the first story, the one about Princess Leia. It begins immediately before A New Hope as the Tantive IV is under attack, and she records her now-famous message to Obi-Wan Kenobi.

I haven’t opened the third one, Aliens: Tales From a Galaxy Far, Far Away. It is also a collection of short stories involving background characters that were either in the background of The Force Awakens, or are from the planets seen during that film.

I’ve been a Star Wars fan since I was little, so this favor I’m doing for my friend isn’t a chore. So far these books have been fun to read, and I would recommend them to anyone ages nine and up, though Before the Awakening and The Princess, the Scoundrel, and the Farm Boy might not make a whole lot of sense if you haven’t seen the Star Wars films.

And if you haven’t seen the Star Wars films, what are you doing? Go watch them!