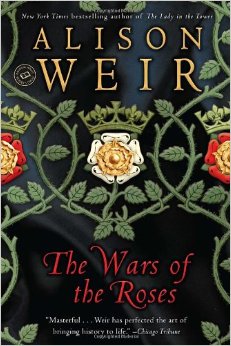 From Goodreads: Lancaster and York. For much of the fifteenth century, these two families were locked in battle for control of the English throne. Kings were murdered and deposed. Armies marched on London. Old noble names were ruined while rising dynasties seized power and lands. The war between the royal houses of Lancaster and York, the most complex in English history, profoundly altered the course of the monarchy. Alison Weir, one of the foremost authorities on British history, brings brilliantly to life both the war itself and the larger-than-life figures who fought it on the great stage of England. The Wars of the Roses is history at its very best—swift and compelling, rich in character, pageantry, and drama, and vivid in its re-creation of an astonishing period of history.

Now that The British History Podcast has me more interested than ever in British history, my To Read list is filling up with more and more books- both fiction and nonfiction- set in various English regions and time periods. I’m about a third of the way through Bernard Cornwell’s The Last Kingdom, and just finished Alison Weir’s The Wars of the Roses.

While my reading spree that was January slowed down significantly this month, I don’t have that to blame for my taking seventeen days to finish reading this. Nor can I blame the sheer number of names and place names that fill this book, as I was familiar with most of them already. I enjoyed the history that Weir recounts, and learned a lot about the Wars of the Roses, including the fact that Henry VI’s queen, Margaret of Anjou, was a primary player (and practically an instigator) in the wars, as Henry VI was easily swayed and ineffectual at ruling, in addition to suffering from bouts of some illness that rendered him unable to function at all. From what I had heard of this period before, you’d think that women didn’t exist, but there they were, front and center- Margaret of Anjou, Cecily Neville, Jacquetta Wydville and her daughter Elizabeth, among others.

So I liked this book, and I don’t know why it took me so long to finish it. Perhaps it had something to do with the fact that I look at popular history with a more critical eye than I used to, and take these historians’ assurances with a grain of salt. They are not always neutral when it comes to historical figures. If you look carefully, you can see who is the favorite and who the historian looks down on or outright hates.

Queen Elizabeth Wydville (or Woodville, as I’ve also seen her called), for example, seems to bear the brunt of Weir’s distaste. She describes this Queen as vain, arrogant, selfish, and ambitious, but then fails to provide examples of these traits. Weir’s primary issue seems to be that after she was crowned many of Elizabeth’s family members were married off to other prominent nobles. But this often happened when a family rose to power, and it helped the family to gain more influence and keep hold of their power as time passed. What’s more is that Weir states that as queen, Elizabeth Wydville had a far smaller allowance than her predecessor, Margaret of Anjou, and that she lived within her means better than Margaret, too. So I’m not sure where Weir’s hostility comes from. Perhaps, back in 1995 when the book was first published, Elizabeth Wydville had a lousy reputation. That happens. Just look at how Anne Boleyn has been viewed across the centuries.

Whatever sparked Weir’s dislike of Elizabeth Wydville, this episode serves as a reminder: historians are people. They are not immune to bias and emotional attachments, so bear that in mind when an historical figure is given nothing but glowing praise or scathing attacks on their character.

Now, don’t look at this like I’m discounting everything Weir wrote about. The Wars of the Roses is wonderfully informative and thoroughly researched account of the events leading to and during the wars. Just remember to take a grain of salt with the superlatives.

3 thoughts on “The Wars of the Roses”