The Oscars are tonight, and in their honor I thought I’d write about a few of my favorite book-to-movie features. I know a lot of people dislike adaptations (as well as the book editions that come out featuring stills from the films, if my Pinterest feed is any sign). Characters and events get left out, plot lines are changed or deleted, or maybe the appearance of main characters is changed from how they’re described in the book. I get that. In too many films it’s like the director glanced at a synopsis and based the film on that and it feels as though the only thing that book and movie have in common is the title.

Other times the director gets it right, simplifies the story without sacrificing plot, character, or tone and creates a work of art that doesn’t feel unfamiliar when you go back to read the book.

I’m always willing to give a book adaptation a chance, even if a lot of things have been changed. Certain things have to change to maintain a cohesive narrative in the confines of a two hour-ish film. Books are generally packed with detail that simply can’t be included in a movie without bogging it down. Often, some details can be overlooked and not affect the story. I mean, does anyone remember that book-Legolas has brown hair, while movie-Legolas is blond? Did that particular change really matter?

So in no particular order, here are some of my favorite book-to-movie adaptations. 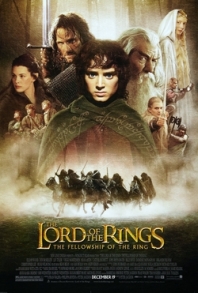 If you knew me during the autumn of 2001, you couldn’t help but notice how excited (and obsessed) I was about this movie. It was all I could do to contain myself whenever I saw the trailer, and I’m still a little amazed that I passed my finals, seeing as how frantic I was for December 19th to arrive. Think of how excited the Hobbits were regarding Bilbo’s birthday party, then double it. That was me. 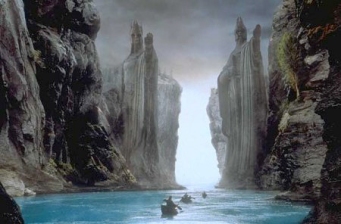 I’d been in love with the trilogy for about a decade when the movies started coming out, and I was not disappointed. Not in the least. I didn’t miss Tom Bombadil, the Barrow Downs, or the Old Forest, and while I wish they would have included Glorfindel, I was not upset about Arwen taking his place. The Nazgul were as creepy as I could have hoped for, Aragorn’s nobility showed itself in the proper places, and Boromir’s fall and redemption rang true. The sets of Hobbiton, Rivendell, Moria, and Lothlorien were better than I had imagined them. All the wonderful details were spot on, and the soundtrack and cinematography were just perfect. 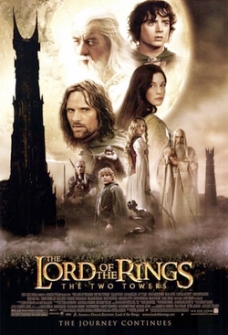 The second film in the trilogy gets a lot of guff for being the metaphorical red-headed stepchild. Being in the middle, it lacks a real beginning and a real ending, and Faramir endures a lot of changes, though he maintains his true character in the end. Elves show up at Helm’s Deep, Saruman is serving Sauron instead of trying to become a rival, and the Ents initially decide not to join the war. But to my mind, the heart of the story and the psychological conflict between Smeagol/Gollum and Frodo drive the film as strongly as it does in the book. 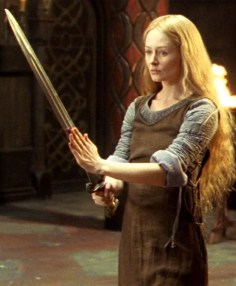 Seeing the expanse of Rohan and the splendor of Edoras and Meduseld were the highlights of The Two Towers. Because I was a horse-crazy kid when I first read the books, I quickly connected to the people of Rohan- especially to Eowyn, the first shield maiden I ever encountered in literature. 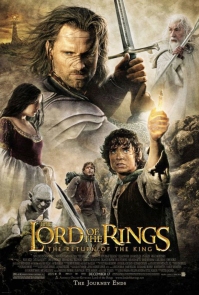 What a finale. Do fantasy films get any better than this?

The first time I saw it in the theater on opening day, during the scene where Shelob is stalking Frodo and the camera pans up to reveal the giant spider waiting above the unsuspecting Hobbit, a little girl in the front row called out, “Look out, Frodo!”

And then Sam had the one line- the only line- I required from the book: “Don’t go where I can’t follow”. I was almost in tears, and I knew what was going to happen next. Then later, after the Ring has been destroyed and Sam and Frodo have collapsed on the slopes of Mt Doom, Sam talks about Rosie Cotton: “… she had ribbons in her hair. If ever I would have married someone, it would’ve been her.” That just slayed me. What a simple little detail- the ribbons in her hair. I think most directors wouldn’t have put it in there, but Peter Jackson knew that the little things counted.

And did anyone else get a little choked up when, facing certain death, Gandalf reassures Pippin that death is not the end, and describes what comes after?

Gandalf: …. and then you see it.
Pippin: See what?
Gandalf: White shores. And beyond, a far grey country under a swift sunrise.
Pippin: That doesn’t sound so bad.
Gandalf: No, no it isn’t.

The charge of the Rohirrim still sends chills down my spine. Theoden’s call to battle would fit right into any Anglo-Saxon epic. 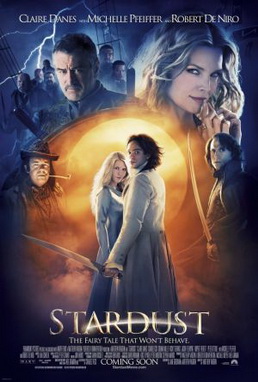 One of my good friends was as excited to see this film as I was, and when we went to see it on opening day, he informed his employees not to call him after 7:00 unless the store was on fire.

Naturally, about halfway through his phone started vibrating. His store had caught on fire.

That didn’t stop me from loving the film from start to finish. It’s full of Neil Gaiman’s humor and contains all the darkness and light inherent to one of his stories, as well as his boundless imagination. When I watched the DVD’s behind the scenes footage, Gaiman admitted to being worried that he was pulling carpenters away from their important work of building cabinets and furniture. They replied that building a flying pirate ship was a dream come true. The cabinets could wait.

I don’t think this film gets as much love or recognition as it deserves, and if you haven’t seen it, you should. 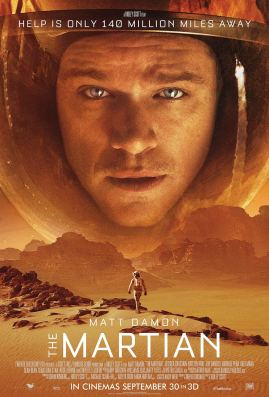 These days, Hollywood tends to take science fiction Very Seriously and forgets that there can be a lot of humor in futuristic stories, even if they are about an astronaut stranded on another planet. I didn’t get a chance to see The Martian in the theater. That’s a shame. The landscapes of Mars are incredible (and real, since they were filmed in Jordan!) and it’s hard to get a sense of the scale of the Hermes spaceship or the vastness of space on my little television. That said, The Martian was my favorite of the movies I first saw in 2016.

Matt Damon is spot on as Mark Watney, the astronaut accidentally left behind on Mars after a storm forced his team to abort the mission. He was separated from them and they thought he was dead. Due to a few quirks in physics, though, Watney survived and then had to figure out how to survive on an alien world, alone, with only the supplies NASA sent for the team and their mission. It’s snarky and funny, suspenseful and moving where it needs to be, and is complete with a fantastically diverse cast and a script that contains myriad geek jokes (notice who is sitting there when they’re talking about the Council of Elrond). I’ve heard this move described as ‘a love letter to science’, and it fits that description perfectly. 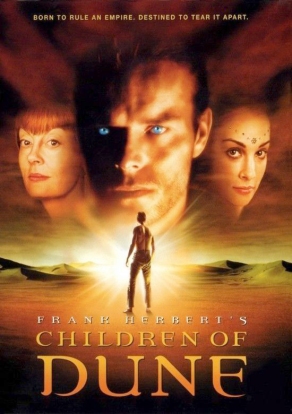 This one isn’t a movie. It’s one of the best mini-series I’ve ever seen from the Sci-Fi channel and the story is a follow-up to one of my favorite books, Dune. The first episode deals with the fallout from Paul Atreides’ sudden rise to the imperial throne and the subsequent jihad that spread out from Arrakis after House Atreides asserted its control over the known universe. Paul- or Muad’Dib, as he was known by his Fremen followers- couldn’t stop the religion that sprang up in his wake and desperately tried to contain the damage, a move that cost him everything though his work would not be completed until the next generation of Atreides came into their own.

The children of Dune were the royal twins, Leto and Ghanima, who are on the verge of their inheritance as the second episode begins. In addition to being heirs to the empire, they also inherited their father’s gifts- including the ability to see possible futures awaiting them. The path to the throne is fraught with peril, though. Conspiracies thrive all around them and Leto and Ghanima resort to desperate measures to ensure their survival so they can wrest the throne from their fiercest rival- their own aunt, Alia. 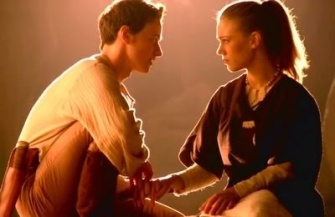 James McAvoy and Jessica Brooks star as Leto and Ghanima

While Children of Dune is set far, far in the future the feudal and religious elements ground the world and give it a sense of reality that we can relate to. Cutthroat politics are often at the heart of some of our most popular stories, both in history- the Wars of the Roses, for example- and on television- Game of Thrones or House of Cards. The threads become so tangled that it’s difficult to figure out how Leto and Ghanima will find their way through to the end.

I love everything about this mini-series. The acting, costumes, sets, music, cinematography, and script are all well done and clearly crafted with love and attention to detail, and if you watch Frank Herbert’s Dune, another Sci-Fi channel miniseries and precursor to Children of Dune, you’ll see a lot of things that are mirrored in the second series and bring character arcs full circle.

Arrival– Twelve alien spaceships appear at various points around the world, prompting world leaders and scientists to figure out how to communicate with the beings who live within the crafts. Amy Adams stars as Dr. Louise Banks, a linguist tasked with breaking the language barrier between humanity and the aliens. Adams’ Oscar nominated performance shows the power of science, careful thought, and communication. It’s hard to write much more than that without giving away major plot points, but this film took my breath away, and the only reason it ended up as an honorable mention is because I haven’t yet read Ted Chiang’s short story, ‘Story of Your  Life’. (2016)

Jodorowky’s Dune– In the 1970s, cult film director Alejandro Jodowrosky poured years of his life and massive amounts of effort and money into what has been billed as ‘The greatest film never made’: a mind-bending version of Frank Herbert’s Dune that would have starred his own son and featured music by Pink Floyd and concept art by a young artist named H.R. Giger. This fantastic documentary from 2013 discusses the process of putting the pieces for this ambitious film together, and how and why the project was eventually given to David Lynch, who made a film notorious for how terrible and incomprehensible it was.

3 thoughts on “Book to Movie”