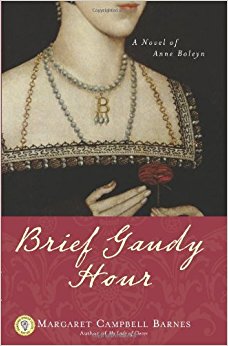 From Goodreads: The enigmatic Anne Boleyn comes to life in this charming, brilliant portrayal by acclaimed British novelist Margaret Campbell Barnes.
The infamous love of King Henry VIII and the mother of Queen Elizabeth I, Anne Boleyn undertook a rocky journey from innocent courtier to powerful Queen of England. A meticulous researcher, Margaret Campbell Barnes immerses readers in this intrigue and in the lush, glittery world of the Tudor Court. The beauty and charms of Anne Boleyn bewitched the most powerful man in the world, King Henry VIII, but her resourcefulness and cleverness were not enough to stop the malice of her enemies. Her swift rise to power quickly became her own undoing.
The author brings to light Boleyn’s humanity and courage, giving an intimate look at a young woman struggling to find her own way in a world dominated by men and adversaries.

I’ve been on an historical fiction tear lately, what with Conn Igguldsen’s Wars of the Roses series, my attempt at reading Sharon Kay Penman’s Falls the Shadow, and the book about Julius Caesar (also by Conn Iggulden). Once I found Brief Gaudy Hour, it seemed only natural that I would give it a shot, given that Anne Boleyn is one of my favorite historical figures.

The book opens when Anne is eighteen and has been summoned to court for the first time. She ends up in the retinue of Henry VIII’s sister Mary, who soon travels to France to marry the aging French king. It’s not long before Mary is widowed, a new king is crowned, and Anne ends up in the retinue of the new queen, Claude. After learning how to charm men and use her unorthodox beauty to set fashions and catch the eyes of whoever she chooses, Anne is recalled to England to serve in the household of the English queen, Katherine of Aragon.

Initially, Anne’s father betroths her to her cousin, a middle-aged Irishman, but Anne soon falls in love with the dashing Harry Percy and seeks to marry him in defiance of her father’s wishes. Little does she know that she has also caught the eye of King Henry VIII. Before she knows it, her marriage contract to her Irish cousin and her secret engagement to Harry Percy are canceled by Cardinal Wolsey so that Henry can marry her.

Brokenhearted that she cannot marry the man she loves, Anne seeks revenge on Wolsey. In the years that follow, Anne uses her charm on Henry to ensure both Wolsey’s downfall and her own ascension. Why should she settle for being a mere mistress when she could be a queen?

Ultimately, though, the wit and charm that made Anne desirable as a mistress makes her a terrible queen, at least in Henry’s eyes. The people are set against her in favor of the previous queen, Katherine of Aragon, and because Anne is unable to give Henry the son he desires, his wandering eye lands on one of Anne’s ladies-in-waiting, Jane Seymour. Anne’s fall is swift and unexpected, and there is nothing she can do to save herself or the men who were condemned with her.

Brief Gaudy Hour is a strange book. It was written in the 1940s and the prose reflects it- almost old fashioned (yet not Victorian in style), and not quite modernist like you’d expect from someone like Virginia Wolfe. And it talks about things that you would expect from a book written in the 1960s or later. There is more than one point, for example, when Anne is thinking about her own sexuality and desirability without viewing either as a shameful thing. And unlike the women around her, Anne doesn’t really want children. She knows she’s expected to have as many as possible- boys especially- but the desire for children isn’t part of her character. What’s more is that Margaret Campbell Barnes doesn’t write about this like it’s something awful or makes Anne somehow less of a woman. It’s simply part of her character. Given that, even now, people often can’t fathom a woman who doesn’t want kids, this is a perspective I did not expect to find in a book written in the 1940s.

Throughout the story, at points where some writers would seek to moralize about Anne’s ‘bad characteristics’ (her sexiness, her quick wit, her desire for the silks and jewels and power that Henry offers her), Barnes regards them as either part of human nature that anyone could fall for (sexuality and the temptations of luxury) or a fine point of Anne’s character (her wit). She is portrayed as a full human being who suffers disappointment and heartbreak, rails against parental and societal expectations, and seeks to make a life for herself on her own terms, in spite of her world’s expectations for women.

While I enjoyed this book, there were a few things that bugged me. Barnes glosses over the religious issues that were at stake. The Boleyn family were secret Protestants at a time where being a Protestant could get you burned at the stake, and yet Barnes treats their beliefs as though it’s a minor thing, and Anne’s beliefs are barely mentioned, though she was a champion of Protestant beliefs and nudged Henry in that direction once it became clear that the Pope was not going to rule in their favor. Another thing that bugs me is how Anne and Henry both seem so content about how long it takes for him to get his divorce from Katherine of Aragon. It took something like six years, but in Brief Gaudy Hour, they’re acting like it took a matter of weeks, so patient are they.

Overall, though, these issues aren’t enough to make me dislike this book. Anne’s portrayal is wonderfully human and the changes to her character make sense from beginning to end. She has her highs and lows, flaws and fine points, and the history of the era is wonderfully accurate. Barnes’s Anne has all the wit and fire that have made her so intriguing for the past five-hundred years, and despite the passage of more than half a century, the story feels surprisingly modern.

If you’re a fan of Natalie Dormer’s portrayal of Anne on the Showtime series, The Tudors, you’ll notice a lot of similarities between Dormer’s version and Barnes’s. And if you haven’t seen The Tudors but are interested in history (or just in Anne Boleyn) for its own sake, I would definitely recommend this book.