Another week has come and gone, and once again I’m wondering where all that time went. I really need to get that temporal vortex out of my closet. I know some of the time was spent in finally watching Stranger Things on Netflix, and a little bit was spent watching Will. As for the rest of it? I dunno. Not nearly enough of it was spent sleeping. 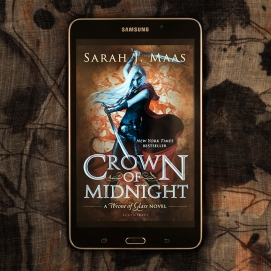 I only finished one of the books I started the week with, and that was Sarah J. Maas’s Crown of Midnight, the second book in the Throne of Glass series. I’ll have a longer write-up later this week, but for now I’ll just say that, while Maas’s writing has improved somewhat, I’m still not a fan. It was fun to do the buddy read with Danielle from Books, Vertigo & Tea, though, and I’m hoping she’ll want to do it again.

The other book I’ve been reading is Lois McMaster Bujold’s The Curse of Chalion, which is one of my all-time favorite books. If you want a master class in world building and political intrigue in a fantasy setting, then this is the book for you. The characters are beautifully written and utterly believable, and even the villains have logical reasons for what they do. And while the world of the five gods has more books, The Curse of Chalion can act as a standalone novel if you’re not in the mood to embark on yet another lengthy series. I’ll have a further review when I finish it.

In other news, I picked up a couple more books this week, because why not? One was a ‘blind date with a classic’ from one of the indie bookstores downtown. My last experience with a ‘blind date’ book was dreadful, as I ended up with Philippa Gregory’s The Other Boleyn Girl, which remains the only book I’ve ever thrown at a wall. This one sounded more interesting, though, and given that it was in the classics section I figured another Philippa Gregory incident would be unlikely.

So what did I get?

It looks fascinating. I’m debating taking it to Iceland with me to read on the plane. We shall see.

I bought two books in all last night. Passing because of the intrigue factor of the ‘blind date with a classic’, and The Ramayana, because I want to develop a better understanding of more literature from around the world.

What’s up for this week? Lots of preparation. I leave for Iceland on August eighth, and while I’m prepared as far as reservations, passports, and currency, I will need to do laundry and give my apartment a good cleaning so I don’t have to do that when I get home and am exhausted and jet-lagged. I’ll also need to figure out how to pack my camera gear, since I’m taking most of it with me and security restrictions regarding electronics are higher these days. C’est la vie.

As for books, I’ll read what I can. I should finish up The Curse of Chalion in the next day or so, and then it’ll be on to Ann Cleeves’s Raven Black, a mystery series set in the Shetland Islands off the northern Scottish coast. I have a friend who grew up in the Shetlands, so I’m interested in where he’s from. Also, there’s a great TV series based on the books, Shetland. I think there are only about eight episodes, but it’s fantastic. It’s available on Netflix streaming, though you’ll probably want to turn on the subtitles as their accents are quick thick.

I started listening to a new-to-me podcast today. It’s called Writing Excuses, and features four writers who discuss various elements of writing and how to do things like world building and pointing out that descriptions of a thing can change drastically based on a character’s point of view. It’s entertaining and three episodes in (they’re all about 15-20 minutes long), the hosts have given me a lot to think about regarding my own writing and in the books I’d reading.