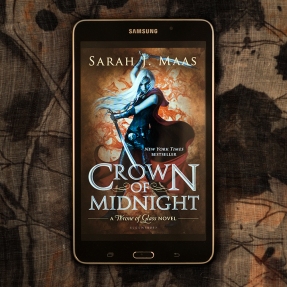 From Goodreads:  “A line that should never be crossed is about to be breached.

It puts this entire castle in jeopardy—and the life of your friend.”

From the throne of glass rules a king with a fist of iron and a soul as black as pitch. Assassin Celaena Sardothien won a brutal contest to become his Champion. Yet Celaena is far from loyal to the crown. She hides her secret vigilantly; she knows that the man she serves is bent on evil.

Keeping up the deadly charade becomes increasingly difficult when Celaena realizes she is not the only one seeking justice. As she tries to untangle the mysteries buried deep within the glass castle, her closest relationships suffer. It seems no one is above questioning her allegiances—not the Crown Prince Dorian; not Chaol, the Captain of the Guard; not even her best friend, Nehemia, a foreign princess with a rebel heart.

Then one terrible night, the secrets they have all been keeping lead to an unspeakable tragedy. As Celaena’s world shatters, she will be forced to give up the very thing most precious to her and decide once and for all where her true loyalties lie… and whom she is ultimately willing to fight for.

I read Crown of Midnight as a buddy read with Danielle over at Books, Vertigo & Tea. I probably wouldn’t have read it otherwise. I found the first book, Throne of Glass, disappointing, as Celaena read like a wish-fulfilling Mary Sue instead of a fully fleshed, dynamic character, and Maas’s writing was clunky and uninspired.

Crown of Midnight… is marginally better. Celaena has more depth this time around, and because the story is not lurching toward the end of a protracted contest there is more time to explore her growth as a person and develop her relationships, both romantic and platonic. She’s an assassin with a heart of gold, and it’s made clear early on that she’s only pretending to carry out the king’s orders. Celaena’s ruses go off without a hitch, so that even her closest friends believe that she’s killed all those people.

And, of course, her friends- Chaol, Dorian, and Nehemia- look at her sidewards because Celaena is an awful person for killing them (even though she hasn’t). Despite the fact that they already knew she was an assassin.

What did they think she did before they met her? Skip through meadows and pick flowers while singing to the animals?

Odd expectations of an assassin’s morality aside, the other characters did a little growing up, too. Dorian rose in my regard after he made a particular discovery, though he’s still content to sit back and watch his evil father continue to plan evil things. It seems his idea of ‘making a difference’ is to object to some of dad’s plans in the council chamber, but his objections hardly seem to make much of a difference. I’m sorry, Dorian, but you can’t just thumb your nose at authority and expect things to change on a fundamental level.

Nehemia continues to be one of the most interesting characters in the story, but alas, we hear more from a doorknob than we do the princess of Eyllwe.

Maas’s writing has improved since the first book though the prose is still workaday, walking from one event to the next and doing its job without much flair, like it just wants to get through the day so it can go home and take a nap. Plot twists are telegraphed so far in advance you can see them coming a mile away. There’s no surprise to them, just the satisfaction of knowing you were right.

I have had an issue with the lack of specificity in the two books. We’re accustomed to fantasy novels having foundations in historical lands, whether it’s the Anglo-Saxon-based setting of Tolkien’s Rohan, the medieval Russia of Katherine Arden’s The Bear and the Nightingale, or the late-Renaissance Amsterdam-like atmosphere of Leigh Bardugo’s Six of Crows. The world of Throne of Glass is harder to pin down and so it’s harder to get a sense of the place, as Maas pulls from a variety of sources to inhabit her world. The character of Baba Yellowlegs, for example, is analogous to the crone Baba Yaga from Russian tales, while the fae spoken of in other parts of the books resemble those of Welsh and Irish stories. In the first book Celaena listens to minuets, a type of dance popular in eighteenth century France. While I realize that Celaena’s world has a variety of cultures, the lack of specificity about any of them makes it difficult to get a concrete sense of the place and thereby get lost in the world. I kept coming across vague terminology (or things that were just used incorrectly) which would make me stop and ask, “What kind of weapon is Celaena using? It just says ‘sword’. There are a lot of different kinds of swords”.

And so, while the characters have grown more likeable in Crown of Midnight, and there is some political intrigue going on, I just don’t have enough interest in the story to want to go out and read the rest of them. I’ll be the first to admit that I am a snobby reader, but when there are so many amazing fantasy novels with more engaging stories than those of the Throne of Glass books, I just can’t see myself taking the time away from them to read about characters I only sort of like.

2 thoughts on “Review: Crown of Midnight”