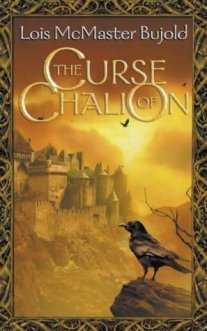 From Goodreads: A man broken in body and spirit, Cazaril, has returned to the noble household he once served as page, and is named, to his great surprise, as the secretary-tutor to the beautiful, strong-willed sister of the impetuous boy who is next in line to rule.

It is an assignment Cazaril dreads, for it will ultimately lead him to the place he fears most, the royal court of Cardegoss, where the powerful enemies, who once placed him in chains, now occupy lofty positions. In addition to the traitorous intrigues of villains, Cazaril and the Royesse Iselle, are faced with a sinister curse that hangs like a sword over the entire blighted House of Chalion and all who stand in their circle. Only by employing the darkest, most forbidden of magics, can Cazaril hope to protect his royal charge—an act that will mark the loyal, damaged servant as a tool of the miraculous, and trap him, flesh and soul, in a maze of demonic paradox, damnation, and death.

I came across The Curse of Chalion while wandering around Barnes and Noble one summer day some years ago. I was in the midst of a reading slump, having finished up the latest volumes of the various series I was reading. I was having a hard time finding new titles to read, as at the time I was stuck to the fantasy genre and read very little outside of it. But it had come to a point where new series/trilogies just weren’t appealing to me. It seemed like everything was either overly formulaic or trying too hard to be original. I’d picked up a variety of standalone novels and been utterly unimpressed with any of them. So I didn’t have very high hopes when I came across this little paperback book with a shiny gold cover.

The synopsis was interesting, though it sounded like most of the others, which promised world- or kingdom-ending consequences if the protagonists failed in their missions, but they rarely delivered on those promises. So I bought the shiny little book, took it home, and cracked it open.

I was hooked from the very first page.

There aren’t many openings that can paint such a vivid picture of a world, the people who inhabit it, their culture, and establish a fascinating main character within the first few chapters, but Bujold accomplishes just that. From the first few pages, you understand Cazaril and his motives. He begins the story as a broken man, recently recovered from injury and illness after his enslavement at the hands of his country’s enemies. While he wants nothing more than a quiet life, he is given the job as secretary-tutor to a teenaged princess. He must teach her about the world they inhabit and how to survive the deadly game of court politics, even as he strives to keep his enemies at bay as he seeks a way to end the curse that hangs over the royal house of Chalion.

It’s a daunting task. Writers with less skill than Bujold would spend several books explaining the world of the five gods, letting the details bog down the plot until it turned into a multi-book saga no one wants to read. But Bujold is better than that. She can paint a picture of a far away county with a few deft strokes and provide a wealth of sensory detail without chattering on about inconsequential bits. Bujold’s story is so engaging that she needs only mention the orange blossoms once or twice to fill your imagination with the scent.

The characters, too, are so fleshed out that they feel real. I don’t need to imagine what actor might play Cazaril. His oft-maligned and patchy beard is as perfectly imaginable as the determined look on the Royesse Iselle’s face, or Lady Betriz’s dimples. Everyone, from Cazaril on down to minor characters is believable, even the villains. The dangerous dy Jironal brothers are treacherous in their own way, but never become the mustache-twirling, melodramatic arch-villains with a master plan to take over the world. Their motives are just as human as everyone else’s, their vices and virtues as recognizable as their own.

“This wasn’t prayer anyway, it was just argument with the gods.
Prayer, he suspected as he hoisted himself up and turned for the door, was putting one foot in front of the other. Moving all the same.”

Religion plays a major role in the story. Unlike many fantasy stories I’ve read, you don’t have a God of Death, a Goddess of the Harvest, or a God of Trees or whatnot (or, as Eddie Izzard might say, “Jeff, the God of Biscuits and Simon, the God of Hairdos”). The Chalionese religion suffuses the lives of its followers, regardless of their piety. Just like the Christian church did in the medieval world (and still does, to a great degree). There are temples to all five gods, a religious hierarchy, and living saints. There are sermons and prayers, holy days, funeral rites, and marriage customs. The people offers prayers and offerings, and while some do it with true faith guiding their actions, others merely pay lip service.

And when a god appears to someone, that person undergoes a fundamental change in perspective. To brush up against the divine is to be forever changed.

This notion– that gods are beyond anything the human mind can truly comprehend– is not something that often comes up in fantasy novels. Often, when a god is mentioned at all, he/she/it seems to be altogether human in their perspective. Their wisdom is often that of a college professor- like someone who has read more books than anyone else. Their influence is direct and obvious, like the Dungeons and Dragons cleric who prays for a resurrection spell and is granted it.

The Chalionese gods are more ambiguous. Did the Lady of Spring guide Iselle when she lit the first flame during the Daughter’s Day rites, or did Iselle manage to light the flame on the first try because she is young and has steady hands? Did the crow fly to Cazaril because he’d been feeding it, or did the Bastard guide the crow? These questions come up, but it’s impossible to answer them for sure because the divine is ineffable. Only a living saint can see the proof of a god’s hand, but being a saint in Chalion is to be marked as utterly different.

Bujold’s prose, too, sets The Curse of Chalion apart. It is lyrical at times, or philosophical; economical when it comes to Chalion’s history, and sarcastic when Cazaril is feeling snarky. It is never clunky or clumsy. It’s light enough on its feet to dance around the reader, but never gets so full of itself that it leaves the reader behind.

“Any man can be kind when he is comfortable. I’d always thought kindness a trivial virtue therefore. But when we were hungry, thirsty, sick, frightened, with our deaths shouting at us, in the heart of horror, you were still as unfailingly courteous as a gentleman at his ease before his own hearth.”

“Events may be horrible or inescapable. Men have always a choice – if not whether, then how they may endure.”

There are few books that I declare to be favorites after the first reading. It often takes multiple readings for that declaration. The Curse of Chalion took one of those top spots in my heart from the first. I take great care with my books– I want them to last forever– but my shiny gold paperback copy is starting to fall apart. The front cover is slowly coming away from the spine and I fear the first couple of chapters will go with it. While I have a digital copy, I don’t think it will be long before I go in search of a new, physical version.

The Curse of Chalion doesn’t show up on many ‘Top Ten Fantasy Novels to Read This Summer/Winter/Before You Die’ lists, and that’s a shame. It doesn’t have bold print “New York Times Bestseller” tag on the top, and it’s not new enough to have a flashy book trailer. No one is making a movie or TV series from it. Come to that, I can hardly find it in bookstores. If you can track it down, though, or download an eBook version, it would be well worth your time and money. Cazaril is a different kind of hero from any other you’ll find. His story is complex, beautifully written, and utterly engaging.

Follow Traveling in Books on WordPress.com
Join 1,146 other followers