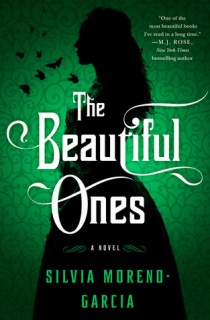 From Goodreads: In a world of etiquette and polite masks, no one is who they seem to be.

Antonina Beaulieu is in the glittering city of Loisail for her first Grand Season, where she will attend balls and mingle among high society. Under the tutelage of the beautiful but cold Valérie Beaulieu, she hopes to find a suitable husband. However, the haphazard manifestations of Nina’s telekinetic powers make her the subject of malicious gossip.

Yet dazzling telekinetic performer and outsider Hector Auvray sees Nina’s powers as a gift, and he teaches her how to hone and control them. As they spend more and more time together, Nina falls in love and believes she’s found the great romance that she’s always dreamed of, but Hector’s courtship of Nina is deceptive.

The Beautiful Ones is a sweeping fantasy of manners set in a world inspired by the Belle Époque.

Note: I won an advance copy of The Beautiful ones in a Goodreads Giveaway. This in no way influenced my opinion of the book.

Ten years ago, Valerie fell madly in love with a young telekinetic performer named Hector. Over the course of the Grand Season in Loisail, they vowed they would marry once Hector returned from across the sea. Valerie’s family, though, was old and noble and had lost nearly all their wealth in the past few generations. Their hopes for a prosperous future lay solely on the beautiful young Valerie, who bowed to their wills and married a wealthy but boring man. And so, over the next ten years, Valerie subsumed her passions into an obsession with the manners and fashions of the Beautiful Ones until she was the one who determined what was fashionable and who was uncouth and undesirable.

Through those ten years, Hector never got over his love for Valerie. He became one of the wealthiest men in Loisail, but no woman ever touched his heart. He grew so desirous of being near Valerie again that he pretended to pay court to her young cousin-by-marriage, Antonina.

For her own part, Antonina- or Nina, as she preferred to be called- has no interest in following the rules of etiquette and style that Valerie has laid down. She would rather spend her days studying bugs or shopping for books, but when Hector begins courting her, she falls head over heels.

And thus the trouble starts.

I wasn’t sure what to think of this book when I read the summary on the back. I’m not normally one for romances, but multiple reviewers had stated that Silvia Moreno-Garcia’s writing was beautiful and captivating, so I was willing to give it a try. The fantastical element of magic- telekinesis- is added in, so I knew it wasn’t going to be a straight-up ‘boy meets girl’ story.

I was captivated from the first chapter. The Beautiful Ones is as much a study of society as it is a romance, with its multiple views of ‘proper etiquette’- Valerie is firmly grounded in it, Nina is familiar with it but honestly doesn’t care, and Hector is an outsider- that all make perfect sense from the individual points of view. It’s a rare writer who can make multiple characters have such rational views of one thing, and have them disagree so profoundly, yet Moreno-Garcia does it easily. And while I could guess who was going to end up with who by the middle of the book, I didn’t care about its predictability. I just wanted to know how they would end up together, given the obstacles before them.

While The Beautiful Ones is classified by some as a fantasy, it is a character-driven story. The world of Loisail is clearly defined and subtly done. I had no trouble imagining the sights and sounds of the Beaulieu’s house or the bookshop Nina visited, but the prose never veered toward the purple though it easily could have, given its Belle Epoque-style setting. Nina and Hector’s telekinetic abilities add magic to the world without beating the reader over the head with it. There are no grand adventures, no wizards or curses, no princesses that need rescuing from the tall tower. The story doesn’t need those elements to be compelling. It just needs its three main characters who are each interesting for their own reasons, who grow and change throughout the story with none of those changes feeling forced or unnatural.

My only issue with the book were minor- grammatical pet peeves that were easy to overlook, and might not even be in the finished edition (mine was an uncorrected advance copy).

I hadn’t heard of Silvia Moreno-Garcia before I entered the Goodreads Giveaway for The Beautiful Ones, but she’s on my radar now. And with the descriptions I’ve seen of her other books, they’ll be just as interesting– and as captivating– as this one.

2 thoughts on “Review: The Beautiful Ones”