The temperatures have been jumping up and down for the past few weeks, heading lower and lower until today. It started snowing around 1:30 this afternoon and did not stop until about 6:30. There was no accumulation, but I’m sure a lot of kids were disappointed that they had to go trick-or-treating with their coats on over their costumes. But that’s how it goes in Nebraska in the fall. It will be 75°F and sunny on a Sunday and then 32°F and snowing on the following Tuesday. 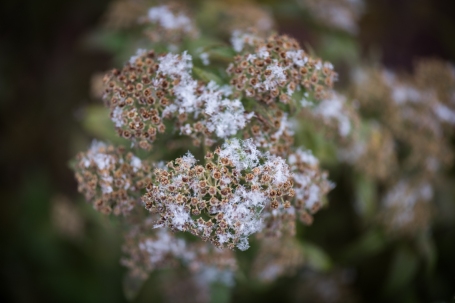 I’ve been watching spooky movies over the past couple of days. Partly because it’s Halloween, and partly because I like them. It was The Addams Family, Sleepy Hollow, and about half of Practical Magic last night, and season three of the television show, Penny Dreadful tonight. It might have been smarter to watch the movies tonight, as you never know when Eva Green’s character, Vanessa Ives, is going to start screaming demonically and scare the children, but for some reason trick-or-treaters don’t come to apartment buildings around here. So I don’t get to see six year-olds dressed up as Batman or Ruth Bader Ginsburg, and I don’t get to eat the leftover candy. That’s probably just as well. I eat too much sugar is it is, and we’re getting into the holiday season with its abundant cookies, pies, and other sweet treats.

October was a busy month for books. In addition to the eleven titles I bought over the weekend at the public library’s annual book sale, I picked up Saul Leiter: Early Color and Ray Bradbury’s Zen in the Art of Writing. I also received two free books, thanks to a couple of Goodreads giveaways. One was Silvia Moreno-Garcia’s The Beautiful Ones, and the other was The River of Consciousness by Oliver Sacks.

I read or listened to ten books in October:

It was, except for a week-long bout of insomnia, a good month for reading. Cool mornings encourage reading in bed before I have to get up and face the day, and hour-long lunch breaks encourage reading. If I could break the habit of skimming through news articles during that hour, I’m sure I would get a lot more reading done and be less stressed out by current events, but it’s entirely possible that I would get stressed out by not knowing what’s going on in the world, so I guess I need to learn how to balance news with books. I will not try to accomplish this book/news balance by reading books about news.

Now that October is almost over it’s time to ponder November in all its brown and gray glory. Whatever leaves have not fallen are uniformly brown. The grass is browning, and the last flowers from summer are wilting and dying off. What’s left behind are sticks and stalks and clouds and wind. After today’s snow it’s supposed to warm up a little, but I doubt that will last long. November is a cold, bleak month where the clocks move back to make the sun feel like it’s setting even earlier.

There are remedies for November. The best ones include hot tea, hearty soups, and more books.

I also want to go to a couple of restaurants I’ve been meaning to try for the past few months. One is a Korean place that everyone says is great, and another is Ethiopian. I had forgotten it was there until a friend told me a couple of weeks ago that he had just eaten there, and that it was wonderful. I may not be able to go everywhere in the world I want to see, but I can get a little taste of it by trying food from everywhere.