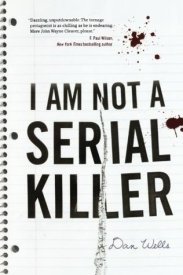 I Am Not a Serial Killer
by Dan Wells
271 pages
Published 2009
Genre: Mystery/Horror

From Goodreads: John Wayne Cleaver is dangerous, and he knows it.

He’s spent his life doing his best not to live up to his potential.

He’s obsessed with serial killers, but really doesn’t want to become one. So for his own sake, and the safety of those around him, he lives by rigid rules he’s written for himself, practicing normal life as if it were a private religion that could save him from damnation.

Dead bodies are normal to John. He likes them, actually. They don’t demand or expect the empathy he’s unable to offer. Perhaps that’s what gives him the objectivity to recognize that there’s something different about the body the police have just found behind the Wash-n-Dry Laundromat—and to appreciate what that difference means.

Now, for the first time, John has to confront a danger outside himself, a threat he can’t control, a menace to everything and everyone he would love, if only he could.

Dan Wells’ debut novel is the first volume of a trilogy that will keep you awake and then haunt your dreams.

My Thoughts:
Thanks to shows like the long-running Criminal Minds or the new Netflix series, Mindhunter, and the endless mystery novels about serial killers from Jack the Ripper and on, the general public is well versed in the story of the obsessive investigator doggedly pursuing the killer to stop him (and rarely, her) from killing again. That fact that the average person probably knows the difference between a spree killer and a serial killer might be a little disturbing, but there’s no sign that the mystery genre is going anywhere. There are too many charismatic or self-destructive literary detectives out there for people to enjoy, and with all those detectives there must be a killer.
Now, I’ve read a lot of mysteries in my time, but I don’t recall reading one where a sociopath sought to catch another sociopath.
That’s one of the unique things about Dan Wells’s 2009 debut novel, I Am Not a Serial Killer.
Our young anti-hero, John Wayne Cleaver, is named after the actor, but he is far more interested in another John Wayne– John Wayne Gacy, the serial killer. John is, in fact, interested in all kinds of serial killers. This is, in part, due to his being a sociopath- he does not feel an emotional connection to anyone around him. He doesn’t love his mother or sister the way a son or brother would. He’s only befriended another classmate because it helps him maintain a sense of normalcy, and he’s oblivious to the flirtations of a girl from his class. It’s a unique point of view. And while one would think that a sociopath’s point of view would be off-putting, John is almost endearing in his honesty and desire to explain himself to the reader. True, he has an inner monster that wants to kill, but he’s desperately trying to hold it back and be a regular human being.
I picked up this book in part because I listen to the podcast, Writing Excuses, which Wells hosts along with writers like Brandon Sanderson and Mary Robinette Kowal. They all talk about their work, citing examples about what they got right and wrong in the stories, and so I knew there was a major plot twist. This twist either makes readers stop in disgust, or become even more fascinated with the story. All I will say about it is, ‘keep an open mind’.
Despite its rather inelegant title, I Am Not a Serial Killer is an engrossing book. Most of this is due to its unique point of view (a fifteen-year-old boy, rather than an adult detective/private investigator/lawyer/short order cook), and because John has dueling reasons for finding the killer. On one hand, he wants the murders to stop. On the other, he wants to know what it’s like for the killer to do what he’s doing. This motivation moves from rational to creepy and back again, sometimes within the same paragraph.
I gave this book three stars on Goodreads because it felt a little amateurish at times. It is Wells’s first published novel, after all. But I liked it enough that I want to read more of the John Cleaver books. It started out with a trilogy, but Wells recently added a second trilogy to the series. I know his writing has improved over the years, so I’m looking forward to seeing where John goes from here.

3 thoughts on “Review: I Am Not a Serial Killer”