Danielle at Books, Vertigo and Tea published the first version of this post that I’ve seen, and it was such a bright little spot of sunshine amidst all the dark clouds that have been hanging over me lately that I decided I would write one like it, with the five books I’m grateful for.

And in no particular order:

The Lord of the Rings by J.R.R. Tolkien 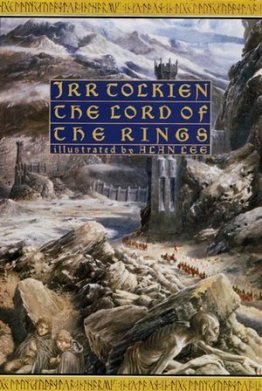 I know, it’s normally published (and read) as a trilogy, but Tolkien intended it to be one book, and thanks to paper shortages after WWII, the publisher decided to break it into three parts. So I’m counting it as one book.

Anyway. This was the first book I completely lost myself in. I read the first one, then had to wait for a whole weekend until I could go back to the school library and check out the next one. It was terrible! But Monday finally arrived, and I checked out the other two books and contentedly finished the trilogy in record time. I’ve read it pretty much once a year every year since, so that’s more than twenty times.

It’s one of those books that seems to change every time I read it, as I discover new details that I somehow missed the first twenty times. When I was younger, it taught me that even small people could be courageous and change the world for the better, and that a girl could take up a sword to defend her people. As I aged, it gave me an appreciation for beautiful language, history, and the epic literature I’ve read since then. There are so many things that are terribly sad in The Lord of the Rings, but so many things that are bright and beautiful, too. 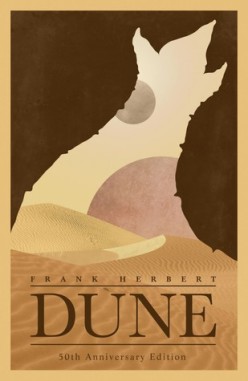 We were visiting Minnesota in December one year, and I wandered into a used bookshop while waiting for my mother. I don’t know what it was about Dune that attracted my twelve-year-old imagination, but I plunked down the seventy-five cents for the worn out paperback and quickly lost myself in the epic story of Paul Atreides and his quest to retake his rightful place and fulfill his destiny.

It’s another book that seems to change every time I read it, though there is so much depth to it that the details and themes that you see and understand change along with you. When I bought it at twelve, it was an amazing adventure story. When I read it now, I see it as a cautionary tale about mixing politics with religion, and how one man’s hopeful vision of the future can be twisted all out of recognition.

But the thing I’ve taken away from it that has been most helpful over the past twenty years is the Bene Gesserit’s ‘Litany Against Fear’:

“I must not fear.
Fear is the mind-killer.
Fear is the little-death that brings total obliteration.
I will face my fear.
I will permit it to pass over me and through me.
And when it has gone past I will turn the inner eye to see its path.
Where the fear has gone there will be nothing.
Only I will remain.”

I memorized this early on, and would repeat it to myself whenever I encountered something that frightened me, and it helped me to face that fear and conquer it. 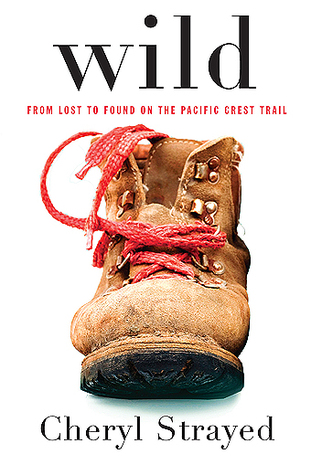 This is the book that inspired me to go out and see the world, without waiting for others to be ready to go with me. Strayed’s decision to go out and hike the Pacific Crest Trail with no experience at long distance hiking was baffling, but her determination and fearlessness prompted me to buy my first set of intercontinental plane tickets and head out to England by myself. I figured that if Strayed could hike so far by herself, then I could manage to find my way around London.

I was right, and I spent a week wandering that amazing city by my lonesome. It was fantastic. Four years and four countries later, buying those first plane tickets were the best thing I have ever done for myself.

“I knew that if I allowed fear to overtake me, my journey was doomed. Fear, to a great extent, is born of a story we tell ourselves, and so I chose to tell myself a different story from the one women are told. I decided I was safe. I was strong. I was brave. Nothing could vanquish me.”
– Cheryl Strayed, Wild 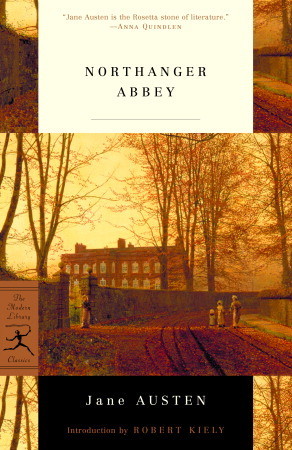 Northanger Abbey is not Jane Austen’s most beloved novel. It’s not even my favorite of Austen’s novel. But it was my gateway into the world of Jane Austen, and I wouldn’t have seen Pride and Prejudice as anything except a dry, academic book I read for school without it.

I’d been on a sort of ‘self-improvement’ streak where I read a bunch of classical novels like 1984 and Animal Farm. I’d heard that Northanger Abbey was a lighter novel- a spoof of the Gothic tales I’d read in my third year literature class at the university, so I gave it a try. I loved it! Because I was reading at my own pace and not simultaneously trying to analyze theme or symbolism, I was able to enjoy Catherine’s adventures and see the humor in the situations she got herself into. After that, I re-read Pride and Prejudice and the rest is history! 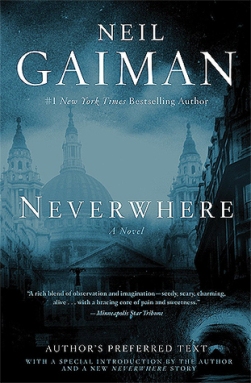 I found my first copy of this book in the tiny little book section of my little town’s tiny little general store. I have no idea who had the bright idea to order this and put it among the romances and bestselling thrillers, but I found it, bought it, and was floored by Gaiman’s imagination and the world of London Below. I could perfectly imagine London itself, as well as the crazed world of the forgotten people who fell between the cracks of reality and landed in London Below. It is still my favorite of Gaiman’s novels, and it actually helped me learn the Underground stations when I went to London the first time.

Growing up in a little Nebraska town before the internet was as everywhere as it is, I didn’t have access to many books that were as wonderfully weird as Neverwhere. It made me look at the world a little bit differently, and helped me to imagine how ordinary things could become extraordinary.

I’m sure I could come up with a dozen or more other books that have influenced me over the years, but five is a nice, round number, so I’ll stop there. Which five books are you most grateful for?

Do I like plants? Yes. Have I killed every plant I've ever owned? Yes. That said, I love how plants look in my little apartment, so rather than doom another one to my black thumb, I bought an artificial succulent. It looks pretty cute sitting in my windowsill. . . . Neverwhere by Neil Gaiman is one of my favorite books ever. It is about the people who fall through the cracks and find London Below, a magical but dangerous place where nothing is as it seems. The sequel, The Seven Sisters, is said to be coming out this Fall. . . . #fakeplants #bookstagrammer #neverwhere #neilgaiman #favoriteauthors #favoritebooks #londonbelow #bookstagram #instabook #magicalrealism #fantasynovel
It's a quiet and boring Tuesday around here. We're probably not even going to get the rain they've been predicting for a week. Just a humdrum day around here. I hope your day is more interesting. . . The Warrior Moon is the final book in the Their Bright Ascendancy trilogy by K. Arsenault Rivera. I plan to read it in March. The first two books were fantastic, so I'm expecting this one to be just as great. . . . #theirbrightascendancy #thewarriormoon #karsenaultrivera #fantasybooks #fantasynovel #bookstagram #booklove #tbr #bookdragon #instabook
I'm already considering what to read in March. So far the plan is to finish a few trilogies and reread the Six of Crows duology now that I've finished the Grisha trilogy. I also want to finish K. Arsenault Rivera's Their Bright Ascendancy trilogy and Linnea Hartsuyker's Half-Drowned King trilogy. The Forever Queen is a standalone (I think) that I haven't gotten to yet, but am looking forward to. . Not pictured: The Mirror and the Light by Hilary Mantel, which comes out in the US on March 10. I pre-ordered a signed copy, and will be tackling it as soon as it arrives. . . . #tbr #toread #sixofcrows #theforeverqueen #linneahartsuyker #thehalfdrownedking #thegoldenwolf #theirbrightascendancy #karsenaultrivera #crookedkingdom #bookstagrammer #bookstagram #instabook #booklove
I am trying to finish up series this year, but I keep starting now ones, like Jenn Lyons' A Chorus of Dragons, which opens with The Ruin of Kings. I guess it's my fate to be in the middle of all the series. . . . #chorusofdragons #ruinofkings #jennlyons #fantasybooks #fantasyseries #booklove #amreading #currentreads #buddyread #bookstagram #instabook #booklove
Starting Ruin and Rising today. I have enjoyed the Grisha trilogy so far, but I still prefer the Six of Crows duology, and I'm looking forward to rereading it when I finish Ruin and Rising. . . . #leighbardugo #ruinandrising #grishatrilogy #grishaverse #grisha #YAfantasy #bookstagram #amreading #alinastarkov #booklove #instabook
Current read: The Sea Queen by Linnea Hartsuyker. It's the second book in a historical fiction trilogy set in the late 800s and tells the story of two siblings, Ragnvald and Svanhild, who must make their way through political and personal turmoil during the Viking age. Hartsuyker's characters are layered and nuanced, and they bring a notorious era to life in a way that helps modern readers to understand a radically different way of life. . . . #linneahartsuyker #theseaqueen #thehalfdrownedking #historicalfiction #vikings #vikingstories #bookstagrammer #bookstagram #instabook #amreading #currentreads