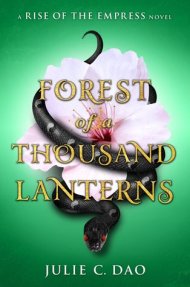 From Goodreads: An East Asian fantasy reimagining of The Evil Queen legend about one peasant girl’s quest to become Empress–and the darkness she must unleash to achieve her destiny.

Eighteen-year-old Xifeng is beautiful. The stars say she is destined for greatness, that she is meant to be Empress of Feng Lu. But only if she embraces the darkness within her. Growing up as a peasant in a forgotten village on the edge of the map, Xifeng longs to fulfill the destiny promised to her by her cruel aunt, the witch Guma, who has read the cards and seen glimmers of Xifeng’s majestic future. But is the price of the throne too high?

Because in order to achieve greatness, she must spurn the young man who loves her and exploit the callous magic that runs through her veins–sorcery fueled by eating the hearts of the recently killed. For the god who has sent her on this journey will not be satisfied until his power is absolute.

Fairy tale retellings are everywhere these days, in part because it’s a current literary fad and partly because they are our foundational stories. They teach us things about the world. They serve as warnings– don’t go into the woods, don’t trust the stranger who smiles too widely– and they show us the benefits of kindness, generosity, and wisdom. Be willing to look beneath the beastly exterior, and you may find yourself a prince in disguise.

For all the lessons the scrappy young heroines (and occasional heroes) of these stories teach us, we never hear about how the villain came to be. They enter the story fully formed- the evil queen has always been evil, while the wicked stepmother has always been vain and cruel. But what choices did the wicked stepmother make to become so callous? What drove the evil queen to become so evil?

That is the question Julie C. Dao asks in her debut fantasy novel, Forest of a Thousand Lanterns. Set in a fantastical, eastern Asian-based setting, the story follows the beautiful Xifeng from her humble beginnings in a peasant village to the imperial palace where she begins her rise to power. She is raised by her cruel aunt, a witch called Guma, and educated not only in poetry, history, and embroidery, but also in blood magic. Every once in a while, Guma brings Xifeng in to read the cards and every time the cards tell of Xifeng’s great destiny- one that Xifeng doesn’t quite believe in until she is eighteen years old and struck by a vision of her own. After that she leaves town along with Wei, the blacksmith who has loved her since they were children. Along the way, Xifeng is counseled to resist the darkness within her- advice that Xifeng holds close to her heart.

At first, anyway. Xifeng believes in her great destiny, but in the imperial palace, a good heart won’t help her achieve her goals.

I was captivated by this book from the first page. The fantasy setting is familiar- swords and magic, strange beasts, prophecies- but the Eastern setting is striking, instantly setting it apart from Western counterparts that have their foundations firmly stuck in medieval England or France. Here is a world of duality- Xifeng, for example has a light nature that is free to love and be loved, and a dark nature that desires power above all. And while there is  a prophecy, it is one that can be set aside if the Chosen One decides not to pursue it after all. It is a world of silks, concubines and eunuchs, all of whom are conniving and struggling for the favor of the imperial couple which in itself a corrupting influence.

Because I had read about Forest of a Thousand Lanterns being a story about an anti-heroine, I knew from the outset what Xifeng would ultimately choose. But that outcome is not the point of this tale. In this fairytale retelling, Dao shows us what the desire for power will do to a person, and that sometimes those born to power wish they had the simpler life that those of lower rank often spurn. Here, no one is happy where they are. It’s what they do with that unhappiness that defines them.

I spent most of my day off finishing Forest of a Thousand Lanterns yesterday because it was so compelling. I wanted to find out if Xifeng would resist the darkness within her. Would she turn her back on Wei? Would she survive the machinations of her rival, Lady Sun? Dao answers all of those questions and more in this masterful debut, leaving the world wide open for the next book in the series as well as claiming the Snow White tale so thoroughly that it feels as though the Western canon (and Disney) has borrowed the story from Eastern legends.

It’s early in 2018, I know, but I have  a feeling that when December comes around again, Forest of a Thousand Lanterns will still be on the top of my list of favorite books of the year.

6 thoughts on “Review- Forest of a Thousand Lanterns”