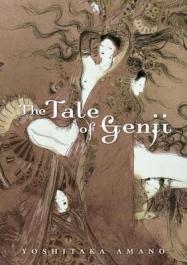 From Goodreads:  Yoshitaka Amano has been praised around the world for his lush watercolors and evocative work dealing with myth and legend. In The Tale of Genji Mr. Amano brings his considerable talent to retelling one of the most famous of Japanese myths: written by Murasaki Shikibu shortly after 1000 AD and considered by most scholars to be the first novel ever written, The Tale of Genji is the story of the romantic adventures of Genji, the amazingly handsome prince and his many romantic conquests. Told through stunning paintings, Mr. Amano brings this classic story to life for a new generation.

As one of the most respected stories of all time, The Tale of Genji holds a worldwide place of honor among lovers of myth and legend.

Will appeal to the legions of Vampire Hunter D fans worldwide, as well as fans of his work on Sandman (written by New York Times-bestselling author Neil Gaiman) and Wolverine (with award-winning author Greg Rucka).

I first downloaded The Tale of Genji to my eReader via the Hoopla app, but three pages into it, I knew the smaller, digital format wasn’t doing justice to these spectacular images. I found a used copy online, ordered it, and a week or so later had it in my hands.

Lady Murasaki Shikibu’s work, The Tale of Genji, is considered by many to be the first novel ever written- around the year 1000 CE. It is the story of a prince named Genji and the many women he falls in love with throughout his lifetime. At 1182 pages, the book is long and likely difficult for Western readers to follow. Yoshitaka Amano’s illustrated version is, of course, far shorter and is more like a summary of Lady Murasaki’s novel. A few paragraphs introduce the major characters and their relationship with Genji, and there are selections of Lady Murasaki’s poetry included, but the high point of this particular book is Amano’s incredible watercolor illustrations. 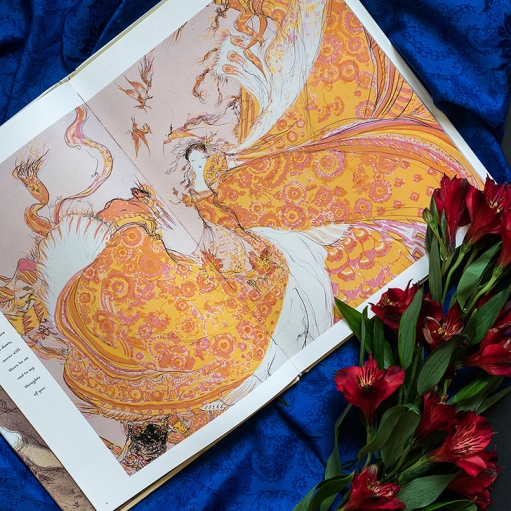 I could spend a whole day just looking at the paintings in this book, and having studied watercolor myself, the detail that Amano both includes and implies with just a few brushstrokes constantly amazes me. I usually don’t pay much mind to the ‘suggested titles’ that apps like Hoopla provide, but in this case I’m happy that I saw The Tale of Genji. Yoshitaka Amano is one of my favorite illustrators, but I had somehow never seen this particular title before.

I highly recommend this book if you are a fan of anything related to Japanese culture, whether it’s literature, art, or modern pop culture. With his work in the Final Fantasy video game series and the comic Vampire Hunter D, Amano has brought Japanese aesthetics into Western popular culture, and his work on The Tale of Genji adds to that bridge.

Due to its sensuous nature, though, I would not recommend The Tale of Genji for younger readers. There is nothing explicit, but the themes and illustrations do lean toward the mature side of literature.

2 thoughts on “Review- The Tale of Genji”