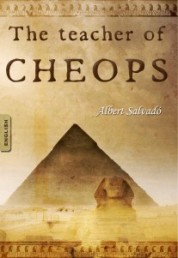 From Goodreads: This is the history of the time of Pharaoh Snefru and Queen Hetepheres, the parents of Cheops, who built the largest and most impressive pyramid of all. It is also the story of the high priest Ramosi, Sedum, a slave who became Cheops’ teacher, and how the first pyramid came to be built.

Ramosi and Sedum learned to write in the stars and tried to change their destinies, but fortune treated them very differently. This is a tale of the confrontation between two men’s intelligence: one fighting for power, the other struggling for freedom.

I think I came across this book while reading Ann Morgan’s blog, A Year of Reading the World. This was her selection from the tiny country of Andorra, located in the Pyrenees Mountains between France and Spain. It was initially written in Catalan and won the 1998 Nestor Lujan Prize for books written in Catalan, but with a global population of 10,000,000 Catalan speakers, Morgan was intitially skeptical of the size of the competition. Fortunately, she was pleasantly surprised, and though she states that a few sections were oddly translated, she enjoyed reading it.  I hope I have a similar experience.

Follow Traveling in Books on WordPress.com
Join 1,133 other followers