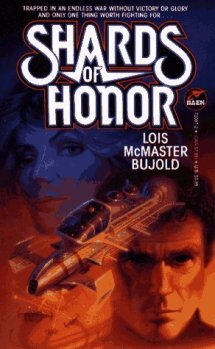 From Goodreads: When Cordelia Naismith and her survey crew are attacked by a renegade group from Barrayar, she is taken prisoner by Aral Vorkosigan, commander of the Barrayan ship that has been taken over by an ambitious and ruthless crew member. Aral and Cordelia survive countless mishaps while their mutual admiration and even stronger feelings emerge.

There are times when a synopsis fails to convey the breadth of a story, and the Goodreads synopsis for Lois McMaster Bujold’s Shards of Honor is particularly anemic in its description. So let’s get it right.

While surveying a planet newly discovered by Beta Colony, Cordelia Naismith and her survey team are attacked by renegades from the militaristic planet of Barrayar. After being captured by the commander of the Barrayaran ship- himself the victim of a mutinous power play- Cordelia seeks to keep both herself and her fellow Betan survivor alive on a hostile planet under the watchful eye of a soldier who may not have their welfare in mind.

As their journey progresses, Cordelia discovers that the truth she thought she knew about Barrayar and the notorious Aral Vorkosigan, The Butcher of Komarr, may be entirely wrong. As she and Vorkosigan are drawn closer together, interstellar war and dark political plots threaten everything that Cordelia knows to be true, and she discovers that the only way through the darkness may require her to turn her back on everything she holds dear.

Doesn’t that sound a bit more intriguing than ‘countless mishaps’ and ‘mutual admiration’?

Shards of Honor is the book that introduced the world to Cordelia Naismith and the Vorkosigans, a noble family squarely in the middle of the web of political intrigue that makes up the upper tiers of Barrayaran society. Unlike too many of his peers, Aral Vorkosigan is a man of honor who believes in the rule of law and holds to his word, no matter the cost to himself.

Cordelia Naismith is a similarly honorable woman, but not in the militariy sense. She is primarily a scientist who conducts survey missions, exploring planets as part of the exploration arm of the Betan military. She, too, keeps her word and does all that she can to protect those under her command and it is this devotion that draws Aral Vorkosigan to her. Not that he would ever willingly admit it. But their attraction cannot be denied, and ultimately causes both Cordelia and Aral to make decisions and do things they never dreamed possible.

I have to admit that the weak synopsis put me off this book for a long time, despite having heard so many good things about The Vorkosigan saga. Lois McMaster Bujold wrote one of my favorite fantasy novels of all time, The Curse of Chalion, and has won All The Awards many times over, so I should have trusted in the quality of her work. But one thing drives out another, as they say, and I kept forgetting that Bujold’s science fiction saga was out there. It doesn’t help that the books rarely seem to be on bookstore shelves these days, seeing as how the early volumes are thirty years old. We long for new things, after all, and forget that old things can be just as good, if not better.

But when I came across an article about ten great audiobook narrators and saw that Grover Gardner, who narrates the Vorkosigan Saga, was on that list, I decided to finally give it a shot.

I was not disappointed. Shards of Honor had me hooked from the beginning, and though the story is told from Cordelia’s point of view throughout, it didn’t bother me that the narrator was a man. Grover Gardner does not stoop to giving his female voices that awful breathiness or falsettos that drive me nuts. His presentation of Cordelia is no-nonsense and filled with wry humor. By the time chapter two came along, I hardly noticed that this woman’s story was being narrated by a man, because it had drawn me in so completely.

While Shards of Honor is billed as something of a romance, there are bigger elements at work than two disparate people working through their prejudices to find common ground. The peace between the colonies is fragile, liable to shatter at any moment, and indeed it does though not for the reason that most of the characters suspect. Once that peace breaks, what happens to those caught up in the chaos? And what happens when they try to go home again and find that everything is different? Are they different, or is home different?

In other hands this might be too much to pack into a single book, and I can see how Bujold might have stretched the material from Shards of Honor across a trilogy- and might have done so, had this book been written in 2016 instead of 1986. But Bujold distills her tales down to their most potent forms, and so leaves out the filler that bloats other sci-fi/fantasy epics without cutting out the moments of peace and joy and the characters have earned.

Shards of Honor reads differently from other science fiction tales that I’ve read recently. There’s little of the darkness, grit, or edgy realism that is the current norm, though the ideals are no less relevant. There’s also little diversity in the characters’ appearances or backgrounds. It was written for an American audience in 1986, after all.

An intriguing point are the ages of the main characters. Cordelia Naismith is 34, and Aral Vorkosigan is 44. Both of them have had love lives prior to their meeting, and neither of them is really looking for romance when they meet. They benefit from having a few years behind them when it comes to their growing relationship, and so they don’t make completely idiotic decisions when forced to act. Their mature decision-making skills come as a relief from the love triangles and insta-love prevalent in many current series. While it can be fun to read about the fizzy excitement of the first loves of teen-aged and early-twenty-something protagonists, they can be exhausting as the pages flip by with no relief to the endless wanting in sight. At least they are for this happy Millennial singleton who just wants a good story without endless pages of too-sweet puppy love, or worse: unrequited puppy love.

While the Vorkosigan Saga spans at least two generations of the Vorkosigan family in many books across thirty years of Bujold’s lengthy writing career, I don’t think that Cordelia and Aral are featured in more than two of them. I can live with that, though. In Shards of Honor, Bujold has written dimensional characters who live full lives in the span of a single novel. If this were the only book devoted to them, I could be content with where their story left off. Fortunately, there are two.