It’s my birthday! And no, I’m not telling you how old I am.

It’s been a laid back birthday weekend, aside from a little craziness at work yesterday. Last night I went out to dinner with some friends I hadn’t seen for a while. They were in town for state high school basketball, and we went to a fancy hamburger place before they headed out on their 2.5 hour drive home.

I treated myself to trips to bookstores on two straight days, though I did not go overboard on my book purchasing, limiting myself to three titles:

Tonight I’m heading over to friends’ house for an Oscars watch party, though ‘party’ makes it sound more grandiose than it actually is, given that it will be me, the two of them, their toddler (until bedtime), and maybe another friend. We’ve been watching the Oscars together since we were in college, so it’s a tradition that goes back more years than we’re starting to care to think about. There will be excellent food and the chocolate/caramel cake my friend has been making for me for my birthday for ages. All of it is something I’m quite looking forward to.

Last week’s cold lingers on in the form of a stuffed up nose and fatigue at the end of the day. I keep meaning to read more before bed, but then I fall asleep on the page. It’s frustrating, and I hope this week sees the end of my symptoms. I wish I had my teenaged constitution back, and could bounce back from illness seemingly overnight.

I finally made it through Jill Bialosky’s memoir, Poetry Will Save Your Life, and this morning I finished the third book of the Veronica Speedwell mystery series, A Treacherous Curse. It was wonderful! I’d have to go back and re-read the other two books, but I think this is the best one yet. Look for reviews later this week.

I also finished listening to the audiobook of Kiersten White’s Now I Rise, narrated by Fiona Hardingham. While I have a few issues with the story, it was a fitting second entry to the Conquerer’s Saga. I plan to have a review for it out later this week, too. 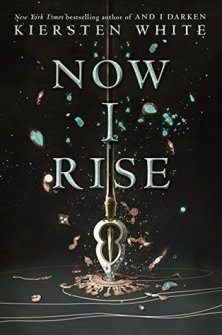 It never fails that I will have several eBooks on hold from the library for a while- sometimes for months- and they will all arrive within days of each other. That happened again this week, when I got Now I Rise, Who Fears Death, and A Treacherous Curse all in a row. Now that I’m done with two of them, I’ll be able to get back to Who Fears Death, and hopefully finish off my other library books before I either have to renew them or take them back.

So what’s up next? Same thing that’s been up next for about a week:

Outside of books, there are a couple of noteworthy things I’ve been watching or listening to.

The Frankenstein Chronicles– I found this on Netflix, and given that it stars Sean Bean and is set in 1800s London, I thought I would give it a shot. I devoured the first season last weekend, and have just a few episodes left of the second season. It’s one of those wonderful fantastical horror/fantasy shows that I can’t predict.

Le Kov by Gwenno- I found out about this wonderful new album on NPR’s All Songs Considered New Music Friday. Gwenno is a British musician who sings in the old or nearly lost languages of her homeland. Her first album is in Welsh, and the second, Le Kov, is in Cornish. I can’t describe the music itself, except that it’s wonderful in a beach music/indie/electronic way.