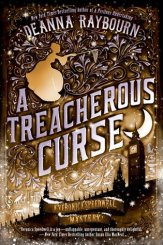 From Goodreads: London, 1888. As colorful and unfettered as the butterflies she collects, Victorian adventuress Veronica Speedwell can’t resist the allure of an exotic mystery—particularly one involving her enigmatic colleague, Stoker.

His former expedition partner has vanished from an archaeological dig with a priceless diadem unearthed from the newly discovered tomb of an Egyptian princess. This disappearance is just the latest in a string of unfortunate events that have plagued the controversial expedition, and rumors abound that the curse of the vengeful princess has been unleashed as the shadowy figure of Anubis himself stalks the streets of London.
But the perils of an ancient curse are not the only challenges Veronica must face as sordid details and malevolent enemies emerge from Stoker’s past.

Caught in a tangle of conspiracies and threats—and thrust into the public eye by an enterprising new foe—Veronica must separate facts from fantasy to unravel a web of duplicity that threatens to cost Stoker everything. . .

As unorthodox as it is, the beginning of A Treacherous Curse is about as Victorian as it gets– our heroine, Veronica Speedwell, is unpacking a gift from a grateful, previous client she saved from the gallows. This shipment, meant for her employer’s museum is an assortment of (probably plundered) artifacts from around the world and commenting on them in her late-1800s (and yet thoroughly modern) way with the specific intent of embarrassing her partner in solving-crimes, Stoker.

The collection in question? A variety of phalluses from the world’s cultures, which Veronica chides Stoker for being embarrassed about, given that they were used in the cultures’ fertility rites, and thus have significance from a natural history perspective.

Of course, we know that Veronica is just trying to get under Stoker’s skin because that’s what she lives for. But her amusement is interrupted by a new case: to discover the whereabouts of one John deMorgan, who disappeared with the prize artifact from a recent dig in Egypt’s Valley of the Kings. There is, of course, a catch- one that involves the most painful part of Stoker’s past. But if he and Veronica don’t find deMorgan, Stoker’s reputation will be ruined all over again, and Veronica will not stand for that.

Along the way, Veronica comes face to face with a ghost from Stoker’s past that she must learn to deal with if she wants to have a future with him, must continue to reconcile the fact of her royal blood without making it known to anyone, and decide if she is willing to let herself set down a few roots in England though her adventurer’s heart yearns for adventures in far away lands. Of course, while all this seriousness is going on, we are not allowed to forget that Veronica is a snarky woman who takes (most) things in stride without unsheathing her claws.

Except for one memorable moment, which left this reader grinning rather vindictively.

But the other party deserved it.

I digress. Deanna Raybourn’s Veronica Speedwell Series is my second favorite mystery series after Will Thomas’s Barker and Llewellyn novels. While you dismiss “second favorite” status because I don’t read that many mysteries in a year, there are a lot of mystery novels I have read across the years, and even more that I have begun and never finished. It takes a peculiar combination of humor, drama, and character for me to fall in love with a series, and mysteries are generally heavy on the drama and light on the humor. There are only so many alcoholic detectives I can take before I start to roll my eyes and wonder how these detectives can be successful, given how much vodka or whisky they imbibe.

So. Veronica, with her very modern and yet oh-so Victorian sensibilities, is intelligent, witty, and beautiful, but even she has her flaws as we see when she realizes she has underestimated several people during this new investigation. And while some might view her as arrogant or vain– Veronica knows that she is smart and beautiful and does not try to downplay either feature, which, for a woman, is seen as arrogant or vain– it only adds to her charm, in my eyes. Better a woman detective who knows exactly who and what she is than yet another depressed alcoholic detective wondering how he/she is going to pay the rent.

I look forward to the new volume in this series as much as I do the Barker and Llewellyn books, and it’s not because I want to see if I can solve the mystery before the lads or Veronica. The mystery is only half the story (ha..). Because I find these characters– Veronica and Stoker in this series, and Cyrus Barker and Co., in the other– I want to see what’s going on in their lives. Will Barker ever ask Mrs. Ashleigh a particular question? Will Stoker stop being so darned Victorian when he’s around Veronica? I look for these answers and more in each new book. Sometimes I find out the answers, and sometimes I’m left hanging again, but I’m never dissatisfied because some major relationship issue isn’t fully dealt with because Raybourn and Thomas are so good at telling stories. The tension remains, drawing me back to the next book to find out if they finally get together in the end, or if some aspect of culture or personal past conspires to keep them apart. For someone who doesn’t care for romances, the romantic tension between Veronica and Stoker is as interesting to me as the mystery itself. And that, Dear Reader, takes some excellent writing skills.

The only reason it doesn’t bother me yet that the Speedwell series is only three books long is because I have decided to start collecting them. When one has but three books to buy, the amount of money spent does not feel so burdensome as it would if there were a dozen. But I hope Raybourn writes a dozen or more books in this series, because like its predecessors, A Treacherous Curse is a delightful read that’s hard to put down.