This is a bit late today. I blame the whiskey. Not that I drank all that much of it, but when you’re up past your bedtime, conversing with some crazy interesting people about books and whatnot, it does lead to some sleeping in.

But that’s okay. The only thing on the agenda today is to do a lot of reading. I had thought about going for a hike in a nearby park, but it’s been raining off and on again for the last two days, so the trails aren’t so much walking paths as they are minor streams.

Because, Dear Readers, I am completely and utterly hooked on Lois McMaster Bujold’s Vorkosigan Saga in a way that I haven’t been hooked on a series of books for a long, long time. So I’ve been almost obsessively listening to the audiobook versions and seeing if I can track down copies of the books. This means that I have been neglecting the other books on my Must Finish These Now list. And it’s not that these books aren’t any good. They’re wonderful. It’s just that Bujold knows how to write a story that hooks you from the first page.

So. What I’ve finished this week:

The Warrior’s Apprentice begins the full story of Miles Vorkosigan, the only son of Cordelia Naismith and Aral Vorkosigan (the main characters of Shards of Honor and Barrayar). Though he deals with stunted growth, brittle bones, and a twisted spine thanks to a chemical attack on his parents before his birth, Miles has endless energy and has a genius for strategy. He sees through his enemy’s schemes and plans, and always seems to find himself in the midst of grand events without seeking them out. There’s adventure, action, drama, and humor, and it’s fascinating to see how Miles gets himself into and out of trouble. There’s no question that I’m looking forward to the rest of this series. I will be hard-pressed to look at anything else, to the detriment of my Read the World challenge… 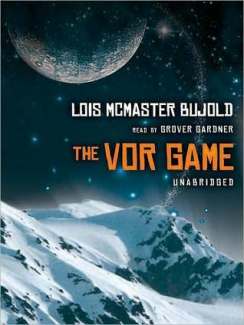 My goal for this coming week is to finish up both of those books, and see if I can pace myself a little better with The Vorkosigan Saga. Assuming I finish The Garden of Evening Mists and Arresting God in Kathmandu, I’m going to start reading Laurence Cosse’s A Novel Bookstore Ngũgĩ wa Thiong’o’s A Grain of Wheat, and Yukio Mishima’s The Sound of Waves.

I hope. Assuming I don’t get completely wrapped up in audiobooks.

Other than listening to Bujold’s books almost non-stop, I drove up to Omaha to see Riverdance with my sister. We’ve been going to various dance presentations for my birthday for the past five years, starting with the Joffrey Ballet’s production of Stravinsky’s Rite of Spring for its 100th anniversary. We always have a hilarious time, even if things sometimes go a little awry, like this time, when my sister accidentally bought the worst seats in the house. Fortunately, we were able to move to different seats that wasn’t directly under the spotlight. The dancers and musicians were amazing, and we had a great time.

So that was my week! It was much better– and a lot more fun– than the week before, and I hope I’ll get more actual reading done this coming week. The Garden of Evening Mists, at the least, must be finished because it’s due back at the library next weekend!

Sure, it's Friday, but I have another day in my workweek and a beautiful day outside that I can't go enjoy. C'est la vie. Sunday will be a nice day, too. . It's getting to be that time of year when I reread Pride and Prejudice. Springtime is Austen time in my world. But not yet. First, I must contend with the last book in Hilary Mantel's Thomas Cromwell trilogy, The Mirror and the Light. I am counting the days until it comes out. . . #austen #janeausten #prideandprejudice #lizziebennet #booklove #instabook #favoritebooks #tbr #bookstagram
Do I like plants? Yes. Have I killed every plant I've ever owned? Yes. That said, I love how plants look in my little apartment, so rather than doom another one to my black thumb, I bought an artificial succulent. It looks pretty cute sitting in my windowsill. . . . Neverwhere by Neil Gaiman is one of my favorite books ever. It is about the people who fall through the cracks and find London Below, a magical but dangerous place where nothing is as it seems. The sequel, The Seven Sisters, is said to be coming out this Fall. . . . #fakeplants #bookstagrammer #neverwhere #neilgaiman #favoriteauthors #favoritebooks #londonbelow #bookstagram #instabook #magicalrealism #fantasynovel
It's a quiet and boring Tuesday around here. We're probably not even going to get the rain they've been predicting for a week. Just a humdrum day around here. I hope your day is more interesting. . . The Warrior Moon is the final book in the Their Bright Ascendancy trilogy by K. Arsenault Rivera. I plan to read it in March. The first two books were fantastic, so I'm expecting this one to be just as great. . . . #theirbrightascendancy #thewarriormoon #karsenaultrivera #fantasybooks #fantasynovel #bookstagram #booklove #tbr #bookdragon #instabook
I'm already considering what to read in March. So far the plan is to finish a few trilogies and reread the Six of Crows duology now that I've finished the Grisha trilogy. I also want to finish K. Arsenault Rivera's Their Bright Ascendancy trilogy and Linnea Hartsuyker's Half-Drowned King trilogy. The Forever Queen is a standalone (I think) that I haven't gotten to yet, but am looking forward to. . Not pictured: The Mirror and the Light by Hilary Mantel, which comes out in the US on March 10. I pre-ordered a signed copy, and will be tackling it as soon as it arrives. . . . #tbr #toread #sixofcrows #theforeverqueen #linneahartsuyker #thehalfdrownedking #thegoldenwolf #theirbrightascendancy #karsenaultrivera #crookedkingdom #bookstagrammer #bookstagram #instabook #booklove
I am trying to finish up series this year, but I keep starting now ones, like Jenn Lyons' A Chorus of Dragons, which opens with The Ruin of Kings. I guess it's my fate to be in the middle of all the series. . . . #chorusofdragons #ruinofkings #jennlyons #fantasybooks #fantasyseries #booklove #amreading #currentreads #buddyread #bookstagram #instabook #booklove
Starting Ruin and Rising today. I have enjoyed the Grisha trilogy so far, but I still prefer the Six of Crows duology, and I'm looking forward to rereading it when I finish Ruin and Rising. . . . #leighbardugo #ruinandrising #grishatrilogy #grishaverse #grisha #YAfantasy #bookstagram #amreading #alinastarkov #booklove #instabook