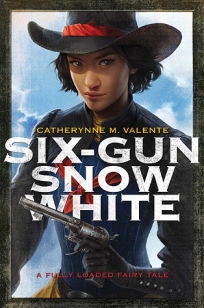 From Goodreads: A New York Times bestselling author offers a brilliant reinvention of one of the best-known fairy tales of all time with Snow White as a gunslinger in the mythical Wild West.

Forget the dark, enchanted forest. Picture instead a masterfully evoked Old West where you are more likely to find coyotes as the seven dwarves. Insert into this scene a plain-spoken, appealing narrator who relates the history of our heroine’s parents—a Nevada silver baron who forced the Crow people to give up one of their most beautiful daughters, Gun That Sings, in marriage to him. Although her mother’s life ended as hers began, so begins a remarkable tale: equal parts heartbreak and strength. This girl has been born into a world with no place for a half-native, half-white child. After being hidden for years, a very wicked stepmother finally gifts her with the name Snow White, referring to the pale skin she will never have. Filled with fascinating glimpses through the fabled looking glass and a close-up look at hard living in the gritty gun-slinging West, this is an utterly enchanting story…at once familiar and entirely new.

Fairy tale retellings have always been part of the literary landscape, and especially so right now when you can find virtually any well-known European fairy tale set in a range of new settings from ancient China to lunar colonies of the far future. But what you don’t often see– or at least I haven’t seen– is one of these retellings set in America’s Old West. Catherynne M. Valente brilliantly fills that gap with her story, Six-Gun Snow White.

I came across this novella quite by accident while looking for another one of her books. I’ve loved all of Valente’s work that I’ve read thus far, so when I spied this little book nestled between its much larger siblings on the library shelves, I couldn’t resist picking it up and I started reading soon after I got it home. Some ninety minutes later I turned the last page. I had not intended to finish the book in one night, but I couldn’t help it, having been completely transported to a magical version of the Old West.

When the Coen Brothers’ film True Grit premiered in 2010, one of the criticisms I heard about it was that the way the characters spoke was unrealistic– very formally, and yet riddled with words and phrases that were grammatically incorrect and, to many ears, sounded ridiculous sprinkled among the formality. But to me, it almost sounded like home. See, I grew up in small town Nebraska, in corn and cattle country. My mother’s family have long been farmers and ranchers, genuine cowboys and cowgirls who are as comfortable on horseback as they are in their pickup trucks. When I was six, my aunt taught me how to properly hold a spoon the same week that she taught me how to ride a horse, and though she’s since moved away from that old farm and I haven’t seen her for several years, I can clearly remember her voice and its peculiar mix of formality and grammatical errors spoken with a flat twang that would fit right into a country music studio in Nashville, or on the set of Western like True Grit.

Within about three sentences, I saw that she could indeed pull it off.

The story opens with Snow White’s narration, detailing how her unlikely (in the late 1800s) parentage came about, her lonely childhood, and how her wicked stepmother came into her life. The second half of the book, as Snow White escapes from her stepmother’s abusive control, is told from multiple points of view and brings in the elements of the traditional Snow White narrative in unexpected, but perfectly fitting ways, while incorporating unexpected questions into the tale. Questions like, ‘where do you go when you don’t belong anywhere?’ or ‘how do you go on when those who claim to love you do nothing but hurt you?’. And regardless of whose point of view the story is coming from, the voice is spot on, and it sounds like it was written by someone who has spent their life at home on the range.

Though she doesn’t get as much press as some other authors working right now, Catherynne M. Valente is one of those rare writers who nails disparate character voices, no matter the setting, age, or background of those characters. Her ability to turn a phrase or describe an entire world in a few sentences is second to few, and it won’t be long before she’s won All The Awards for her brilliant stories. If you haven’t read any of Valente’s work yet, do yourself a favor and pick up any of her books, make a cup of your favorite tea, and settle in for an amazing adventure.