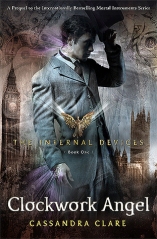 From Goodreads: In a time when Shadowhunters are barely winning the fight against the forces of darkness, one battle will change the course of history forever. Welcome to the Infernal Devices trilogy, a stunning and dangerous prequel to the New York Times bestselling Mortal Instruments series.

The year is 1878. Tessa Gray descends into London’s dark supernatural underworld in search of her missing brother. She soon discovers that her only allies are the demon-slaying Shadowhunters—including Will and Jem, the mysterious boys she is attracted to. Soon they find themselves up against the Pandemonium Club, a secret organization of vampires, demons, warlocks, and humans. Equipped with a magical army of unstoppable clockwork creatures, the Club is out to rule the British Empire, and only Tessa and her allies can stop them…

I tried. I really did. I wanted to like Cassandra Clare’s books, but it’s just not meant to be. I made it through 48% of Clockwork Angel, the first volume of The Infernal Devices trilogy, and I couldn’t put up with it anymore. I know it is a beloved set of books. It has more than 26,000 Goodreads reviews and an average rating of 4.34 stars after more than 555,000 ratings. I can see all this quite plainly, but although I had planned to read all the way to 50% before deciding to keep going or not, I threw in the towel at 48%.

The story is primarily told from Tessa Gray’s point of view, a rather hapless young American woman who sails from New York to London after receiving word from her brother, Nathaniel, to join him there. Only Nathaniel doesn’t meet her and, trusting girl that she is, Tessa is immediately taken prisoner by two very odd women. Upon her rescue, Tessa is pulled into a world she never imagined possible– the world of the Shadowhunters, magical demon fighters descended from angels. Or something. Now I can see how Tessa would initially be reticent to act. She’s alone and frightened after all, but she remains completely passive throughout– to the point where she barely asks questions about her situation or the people she’s with. Not even for the slightest thing. She just blithely goes along with everything, up to and including a plan that puts her in mortal danger with next to no training. If anyone puts up the slightest bit of resistance, she immediately backs down, as though she has no opinion about anything that truly matters to her life.

And the others? They fill out character archetypes well enough– Will Herondale the Cocky Jock, Jem Carstairs the Sensitive but Frail Boy, Jessamine Lovelace the Brat who Doesn’t Want to be There, Charlotte Branwell Who is Calm and in Control, and her husband Henry the Absent Minded Professor.

Now, I’m on board with these archetypes. They’re common enough and when done well can be a lot of fun, but their banter largely fell flat and I found that I never had enough of a connection to really care what happened to them. That’s not a good way to start a trilogy.

From what I’ve heard of The Infernal Devices from here and there online, Will Herondale is supposed to be some sort of romantic figure. Can someone tell me why girls are apparently attracted to snide boys who are rude to them at every turn and give snarky answers to honest questions? Because I do not find that kind of person to be attractive. So why would I want to spend three books reading about him?

I noted to myself that, given how often Clare slips into the passive voice, it would have been very clever of her to only use it when writing from Tessa’s perspective, but it pops up too often for that, and is distracting all by itself. Writing instructors and English teachers warned me to avoid the passive voice. Apparently Clare and her editor did not receive the same advice.

The rest of Clare’s writing is clunky, littered with hordes of unnecessary adverbs, overwrought similes, and needless reminders to let the reader know that the Victorian times are different from the twenty-first century, and that people then had ideas that were very different from ours. I have seen this done subtly enough that the reader wouldn’t notice that the author is making a point about Victorian vs. Modern society, but Clare’s method of pointing out said differences drew attention to itself in a way that I found distracting.

The dialogue, too, was irritating. It wandered into distinctly Victorian territory at times, and then wandered back out again into more modern phrasing. Given that we have plenty of examples of Victorian dialogue in the form of letters, plays, and works of literature for reference, I think Clare could have done much better.

And can we talk about how much description there was? Every time a new character walked in or a familiar character arrived with new clothing, Clare described it in excessive detail. Had she edited out three-quarters of the descriptions, I could still have pictured the scene and not been deluged with minor and distracting details.

And really, I only need to hear once or twice that Will has pretty blue eyes. I don’t need it in every chapter with half a paragraph devoted to describing the exact shade of blue of Will’s eyes, and how unique they are compared to every other set of blue eyes Tessa’s ever seen.

I’m willing to forgive a lot for good characters. Inelegant writing, a simplistic plot, technical issues with things the characters are using (like weapons). But in the case of Clockwork Angel, I didn’t care about any of the characters, particularly Tessa and Will, who dominate the story. Without their charisma to guide me through the story, I found myself distracted by everything else– clunky prose and a plot that feels like it’s been done a thousand times before.

I’ve attempted to read another book by Cassandra Clare, and had the same experience– I disliked the main characters (Clary and Jace) so much that I couldn’t stand to read the rest of it. I know the Shadowhunter books are popular, and that the television show, Shadowhunters, is also popular. But I’ve tried two different works in the Shadowhunters universe and two episodes of the television show, and I haven’t been interested by any of them. I think I’ve given it a fair shot by now, so it’s safe to say that the work of Cassandra Clare simply isn’t for me.