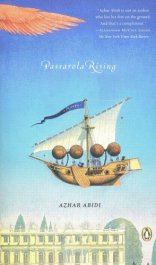 From Goodreads: The fabulous debut novel by new international talent Azhar Abidi, Passarola Rising is a deftly written picaresque tale filled with evocative detail, adventure, and suspense. Set in eighteenth-century Europe, it tells the story of Bartolomeu and Alexandre Lourenço, who use their airship, the Passarola, to escape the strictures of the Church, the suspicion of the government, and the intellectually stultifying climate of Lisbon. As they venture from the salons and bordellos of ancien régime Paris to the desolate far reaches of the North Pole, the brothers Lourenço encounter some of the most colorful characters of the European Enlightenment, including the loquacious Voltaire and the irascible King Stanislaus of Poland.

I don’t remember where I found out about this book, but it looks like it would be a wonderfully fun one to read. I just need to track down a copy and give it a try!