I was out of town last weekend for a friend’s wedding. It was a lovely ceremony in a little prairie church built in 1888 that was moved to the grounds of a museum. There are several historical buildings in the area, including a one-room school, a couple of farmhouses, a barn, and a windmill. Native tall grass grows there, too, so it really feels like you’ve stepped back in time (as long as you ignore the power lines in the distance). 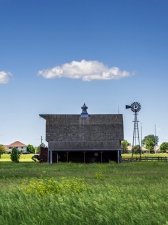 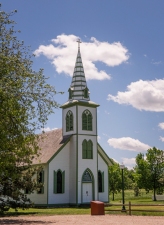 Though the wedding was inside, we ended up spending about an hour and a half outside while the bride and groom were getting their pictures taken. Because I was dumb and did not put sunscreen on, I ended up with sunburned shoulders. The redness has only just gone away, and my shoulders are peeling and itchy. Ick.

Thanks to the onset of summer weather, I’ve been seeing articles about the best beach reads for 2018, how best to pack a bag for a trip to the beach, and apps to help you find the best nearby beaches. While I realize that a significant portion of the American population does live within a few hours’ drive of the beach, there are a lot of people who don’t. Including me. But because I was curious, I Googled “best beaches near me”, and ended up with Golden Gate National Recreation Area. It sounds lovely, but when I sought out the best route to said beach, I ended up with this:

That’s a longer drive than I really want to deal with. So a little later on in the week, I decided to look into closer beaches, and came up with this:

That’s slightly better, but the closest beach Google gave me was this: 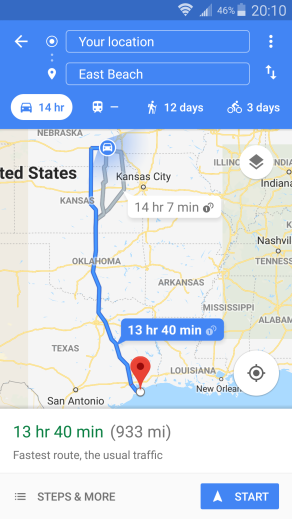 Anyone up for a fourteen hour road trip to the beach?

I did a lot of reading this week! The books I finished:

I hadn’t realized that Lois McMaster Bujold had published The Flowers of Vashnoi, a new Vorkosigan Saga novella, a few weeks ago until I stumbled across a post from a writer who is blogging her re-read of the entire Vorkosigan Saga. I’m a little tempted to track down that blog and read the whole thing, but the Vorkosigan Saga is long, and reading said blog would take forever. Fortunately, this new story from Lady Ekaterin’s point of view is wonderful.

The Last Days of New Paris is one of the weirder novellas I’ve ever read, but given that it’s a surrealist story I shouldn’t be surprised. It details the final days of a Paris where the Nazis still occupy the city and have blocked it off from the world after a Surrealist bomb went off, warping reality and causing objects and art to come to life in frightening ways.

Our Magnificent Bastard Tongue describes McWhorter’s theory of how the form of the English language veered sharply away from the Germanic languages it is related to. He posits that Celtic languages like Welsh and Cornish and the later Viking incursions dramatically changed the way English was spoken. I enjoyed it because I am a complete nerd.

My current reads include: 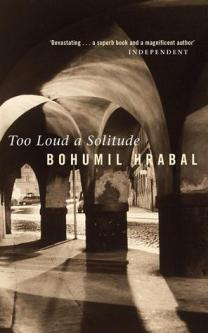 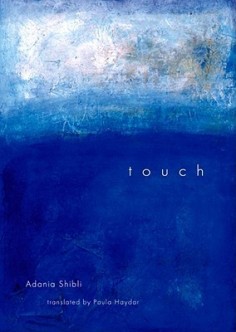 I met a friend for dinner a couple of weeks ago, and during the myriad twists and turns of our conversation, she recommended a poem to me. Since she is a poet herself, I always look up her recommendations. I was not disappointed. Jeananne Verlee’s “Jezebel Revisits the Book of Kings” is an amazing work.

Thanks to Instagram and Tumblr, poetry is making a big comeback in the US, a survey from the National Endowment for the Arts finds. Poets like Rupi Kaur and Yrsa Daley-Ward use social media to find their audiences, and their followers have discovered that poetry isn’t a stodgy literary form stuck in the nineteenth century. Programs like Louder than a Bomb have helped young people find their voices and grow as citizens of the world. I’ve photographed the state finals for the LtaB teams from local schools for the past several years, and I’m consistently impressed by the talent of many of these young writers.