Half the year is gone. Where did it go? I want to know, because I feel like I haven’t gotten nearly enough done. Take my Read the World Challenge, for example. In January, I planned to read 75 books by authors who were not from the US or the UK. I wanted to get a better understanding of the wonderful literature the world has to offer. But how far have I gotten now that half the year has passed? I’ve read a whole 23 titles. I’ll have to read 52 more to achieve my goal. It’s not completely beyond my reading abilities (I’ve read 82 titles so far this year), but it would mean I would have to put off reading a LOT of books I’m excited to read until 2019. That’s not the most exciting of prospects.

But I’ll keep chipping away at my goal, and we’ll see how far I get. Even if I don’t make it to 75, I’ve found a lot of books that I have truly enjoyed that I probably would never have found if I hadn’t gone a little out of my way to expand my literary horizons.

Photo by Aaditya Arora on Pexels.com

Thanks to a heat wave and the subsequent loss of sleep, some procrastination, and my discovery of BookTube, I didn’t get as much reading done in June as I would have liked, in spite of the thirteen titles on my bullet journal’s ‘June Reads’ list. A few novellas and a (long) short story helped me add to my title list without adding much to my page count.

Books I read in June:

Of these books, five of them were written by women, so I’ve broken my streak of reading more books by women than by men, but that’s okay. I enjoyed all of these books in one way or another, and it’s not like I didn’t read any books by women.

Anyway. I read four books by non US/UK authors this month, which hardly helped me get to my goal (*sighs*).

Thanks to a couple of coupons and a fundraiser at one of the indie bookshops downtown, I bought more books than I intended to. But at least I saved money on them, right?

I completed a couple of tags and was nominated for the Liebster Award by Danielle at Books, Vertigo & Tea, as well as writing a few other fun posts in June:

What’s Up For July?

Well, I’m going to try to read the books I meant to read in June but didn’t, along with a couple of other books that have been staring at me from the shelf. I’m also going to try to not buy any new books this month.

That’s the goal. We’ll see if I accomplish it.

I have two books I started reading in June that I need to finish in July:

I’ve got a busy month ahead of me, thanks to work and a brief trip to my hometown at the end of the month, so hopefully I will get to all of these books. Or at the very least, I hope I won’t be such a mood reader like I was in June. July tends to be the hottest month of the year, though, so I may be a grouchy reader, not just a moody one.

In other news, I’ve made some new cat friends! 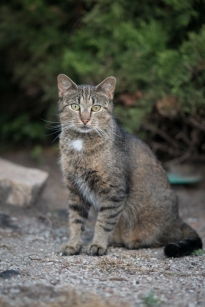 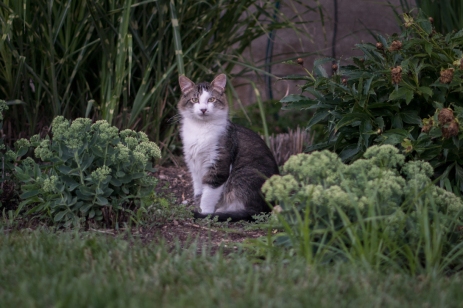