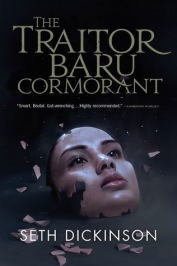 From Goodreads: The Traitor Baru Cormorant is an epic geopolitical fantasy about one woman’s mission to tear down an empire by learning how to rule it.

Tomorrow, on the beach, Baru Cormorant will look up from the sand of her home and see red sails on the horizon.

The Empire of Masks is coming, armed with coin and ink, doctrine and compass, soap and lies. They’ll conquer Baru’s island, rewrite her culture, criminalize her customs, and dispose of one of her fathers. But Baru is patient. She’ll swallow her hate, prove her talent, and join the Masquerade. She will learn the secrets of empire. She’ll be exactly what they need. And she’ll claw her way high enough up the rungs of power to set her people free.

In a final test of her loyalty, the Masquerade will send Baru to bring order to distant Aurdwynn, a snakepit of rebels, informants, and seditious dukes. Aurdwynn kills everyone who tries to rule it. To survive, Baru will need to untangle this land’s intricate web of treachery – and conceal her attraction to the dangerously fascinating Duchess Tain Hu.

But Baru is a savant in games of power, as ruthless in her tactics as she is fixated on her goals. In the calculus of her schemes, all ledgers must be balanced, and the price of liberation paid in full.

I’ve seen rave reviews about this on several different BookTube channels, and the premise looks fantastic. Since the sequel is due out sometime this fall, I won’t have a long wait if I love this one. I checked out the audiobook via the Overdrive app earlier this week and did not like the narrator (At all. Not one bit), so I’ll have to pick up a physical copy sometime soon.