Goodreads Monday is a weekly meme where we randomly select a book from our Goodreads To Be Read list and share it with the world. 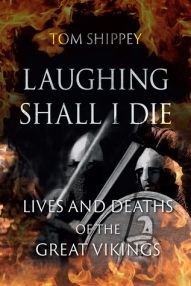 Laughing Shall I die: Lives and Deaths of the Great Vikings
by Tom Shippey
368 pages
Nonfiction
Published in July, 2018 by Reaktion Books

From Goodreads: Laughing Shall I Die explores the Viking fascination with scenes of heroic death. The literature of the Vikings is dominated by famous last stands, famous last words, death songs, and defiant gestures, all presented with grim humor. Much of this mindset is markedly alien to modern sentiment, and academics have accordingly shunned it. And yet, it is this same worldview that has always powered the popular public image of the Vikings—with their berserkers, valkyries, and cults of Valhalla and Ragnarok—and has also been surprisingly corroborated by archaeological discoveries such as the Ridgeway massacre site in Dorset.

Was it this mindset that powered the sudden eruption of the Vikings onto the European scene? Was it a belief in heroic death that made them so lastingly successful against so many bellicose opponents? Weighing the evidence of sagas and poems against the accounts of the Vikings’ victims, Tom Shippey considers these questions as he plumbs the complexities of Viking psychology. Along the way, he recounts many of the great bravura scenes of Old Norse literature, including the Fall of the House of the Skjoldungs, the clash between the two great longships Ironbeard and Long Serpent, and the death of Thormod the skald. One of the most exciting books on Vikings for a generation, Laughing Shall I Die presents Vikings for what they were: not peaceful explorers and traders, but warriors, marauders, and storytellers.

History. Vikings. A book by a Tolkien scholar whose work I enjoy. What’s not to like about this book? My library doesn’t have a copy, so I’ll have to see about ordering it from one of the indie bookshops downtown.

One thought on “Goodreads Monday: Laughing Shall I Die”