My public library has a big book sale every Fall. They take over the largest room in a local convention center for four days, and it draws hundreds of people. This year’s sale was over the weekend, and so I drove out through an early snowstorm to pore over the remnants, which was still a wide variety and many of them in nearly new condition. The science fiction and fantasy sections were almost gone, but there were plenty of choices in the fiction section. Because it was the last day, and the library is trying to get rid of as many books as possible on that last day, you could buy a full box of books for just $5. While some people left with multiple boxes filled to the top, I left with just one box of seventeen books. I’ve read two of them before and was lucky enough to find them in hardcover!

In no particular order, here are the books I bought:

I honestly don’t know where I’m going to put all of these books! Though I did unhaul some books a few weeks ago, I don’t have that much room on my shelves. They will probably end up in my little studio where the books are starting to take over the shelves currently holding all my art supplies. 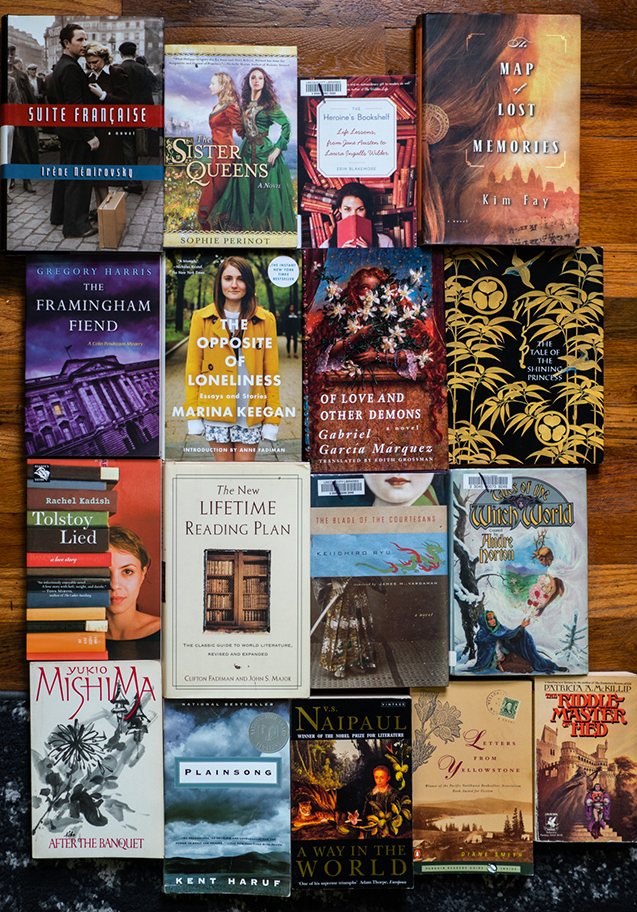 Happy Tokien Reading Day! I've been reading Icelandic Sagas lately, so I think I will reread the professor's translation of Beowulf later today since I have plenty of time. . What are you reading for Tolkien Reading Day? . . . #tolkien #jrrtolkien #tolkienreadingday #lotr #lordoftherings #bookstagram #instabook #favoriteauthors #favoritebooks #bookdragon
I read and enjoyed Six of Crows soon after it came out, but I hadn't read the Grisha trilogy then. Now that I have read the first three books, I like Six of Crows even more. I plan to read Crooked Kingdom in April, and then onto King of Scars! . . . #leighbardugo #sixofcrows #grisha #grishaverse #yafantasy #bookstagram #amreading #currentreads #booklove
"...if you can't speak truth at a beheading, when can you speak it?" . My pre-ordered copy of Hilary Mantel's The Mirror and the Light finally arrived the other day. The fact that I know exactly what is going to happen does not lessen my anticipation to read it. I plan to take it slowly and soak up every word of Mantel's incredible writing. . . . #hilarymantel #mantel #hecromwell #themirrorandthelight #thomascromwell #historicalfiction #tudorengland #booklove #amreading #favoritebooks
I recently finished Woven In Moonlight by Isabel Ibañez. It was the fourth straight YA fantasy I enjoyed, which must be some kind of record. YA fantasy and I have a rocky relationship. . Woven in Moonlight is about a young woman named Ximena who serves as the decoy for the Ilustrian condesa, Catalina. When the conquering King Atoc demands that the Condesa come to his palace to marry him, Ximena goes so she can find a weapon that will aide her people in their struggle for freedom. To pass messages home, she weaves tapestries with strands of moonlight. But the longer she stays in the Castillo, the more she realizes that the situation is more complicated than she thought, and no one is what they seem. . . . #woveninmoonlight #isabelIbañez, #yafantasy #bookstagram #inatabook #bolivianfolklore #booklove
Happy #tolkientuesday ! It's supposed to be a beautiful day around here, and I am looking forward to it. What is your day looking like? . Tolken: Maker or Middle-earth is a collection of essays about Tokien and his work and contains photographs of the things in his life, and well as illustrations he drew and painted for his stories. It's a big, expensive book, but it was worth it to me. . . . #jrrtolkien #tolkien #makerofmiddleearth #favoriteauthors #bookstagram #instabook #booklove
March TBR! There are a couple of rereads, a few trilogies to finish, and a lot of historical fiction! . The Six of Crows duology is the reread. I finally read the Grisha trilogy in January and February, so now it's time for Six of Crows and King of Scars before the show airs on Netflix. . The Warrior Moon by K. Arsenault Rivera and The Golden Wolf by Linnea Hartsuyker are the final books from two of the three trilogies I am finishing. . I have been meaning to get to Helen Hollick's The Forever Queen for a few months now, and Seven Deadly Shadows by Courtney Alameda and Valynne E. Maetani looks like a lot of fun. . Not pictured: The Mirror and the Light by Hilary Mantel, which doesn't come out in the US until March 10. That's the third trilogy I will finish in March, and the book I am looking forward to the most. . . . #tbr #bookstack #toread #bookstagram #sixofcrows #thegoldenwolf #foreverqueen #historicalfiction #sevendeadlyshadows #yafantasy #thewarriormoon #crookedkingdom #theirbrightascendancy #instabook #booklove