So it’s been a minute. It’s been an up and down couple of weeks, and my mind and mood haven’t been set toward reading or blogging. That’s not to say I haven’t been doing anything at all. Quite the contrary. I’ve been spending time with my bookclub friends, went to see another friend’s new Celtic band’s first performance, did a bit of clothes shopping, and watched the entirety of the third season of Daredevil over a few days. Also, baking. My Irish cookbook has been getting quite the workout this weekend, what with the soda bread, the cheddar bacon muffins, the chocolate stout cake with cream cheese frosting, and the Dublin macaroni and cheese recipe I plan to make later today. So aside from one rainy day where my mood was abysmal (until I finally dragged myself out of the house and had lunch with a friend), I’ve been doing a lot. Just not a lot of reading.

And that’s fine. With 143 books under my belt this year, it’s not like I haven’t been reading. I’m just not doing a lot of it this month as compared to others. 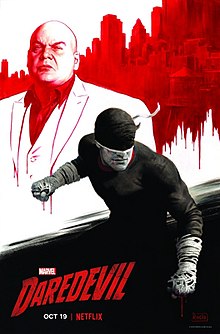 But can I just say that the third season of Daredevil is fantastic?! This show is most intriguing when Matt Murdock’s Catholicism plays a role in his internal struggle. It was a major part of Matt’s character arc during the first season and was lacking in the second season, which I thought was so-so. But Matt’s back in church and back to his internal struggles, Wilson Fisk is threatening Hell’s Kitchen again, Karen’s background is fleshed out, and Foggy is back to being the heart of the story. All is mostly as it should be, except Matt is astoundingly insufferable at times. He has some issues to work through, after all, and he’s not the best at doing it in a healthy fashion.

In other news, this past week was the height of Fall color around here. While we don’t get the vivid colors that you’ll see in New England it’s still beautiful around here, especially in the early morning and late afternoon when the sun is low in the sky and the light hits the trees just so and illuminates them better than the brightest Christmas trees. Even the rainy days are lovely, as the water saturates the colors of the leaves and everything else. 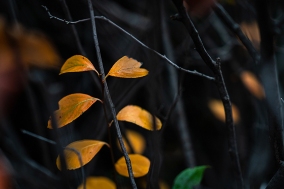 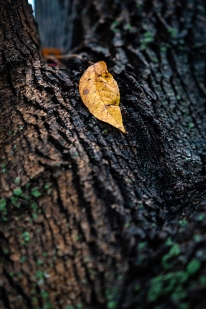 As I said, I haven’t read much over the past couple of weeks. I finished the first book of  Rebecca Roanhorse’s new urban fantasy series set on a future Earth that has experienced a climate catastrophe and the reawakening of old gods and magic. Trail of Lightning is set in the Navajo nation and features Navajo characters and mythology. It’s a fast-paced story and a breath of fresh air to read an urban fantasy that doesn’t involve a bunch of magical European creatures and traditions plopped down in the United States. The next book in the series doesn’t come out until April of next year, and I am so looking forward to it!

I also finished listening to the audiobook version of The Return of the King by J.R.R. Tolkien, read by Rob Inglis. It was wonderful, and I was a little sad to finish it up, even though I know the story by heart. If you haven’t been able to get into reading The Lord of the Rings, give the audiobook a try! Inglis’s performance is fantastic.

The last book I finished was my Everyman’s Library Pocket Poetry edition of poems by Gerard Manley Hopkins. The first half is devoted to his poetry, but the second half comprises prose works and his explanations of the meter of his verse. That part wasn’t terribly interesting to me, a non-poet, so I skimmed it. But the poetry more than balanced out the duller sections.

And that’s been it for the books I finished over the past couple of weeks! It’s been slow-going on the book front, and I’ve started and stopped a few different titles thanks to a general lack of interest. Hopefully, I’ll get back into the swing of things, bookwise. I borrowed the newest volume of Marie Liu and Sana Takeda’s Monstress vol. 3: Haven from the library and I’m poking at a book about books called The Heroine’s Bookshelf: Life Lessons from Jane Austen to Laura Ingalls Wilder by Erin Blakemore. So far, it’s fine.

My current audiobook selection for the car is Faithful Place by Tana French, read by Tim Reynolds. It’s the third book in French’s Dublin Murder Squad series. The first two were amazing, but dense and dark, and I needed a lot of time between them. Faithful Place isn’t any less intense than the first two, but there’s something about the audio version that makes it less overwhelming. Or maybe it’s the fact that I’m getting it twenty to thirty minutes at a time during my commute instead of settling down with the book for an hour or more.

What am I going to read next? I have no idea. There are plenty of options waiting for me on my shelves, but right now nothing appeals to me. We’ll see over the next few days what sounds good. Or else I’ll finish up my rewatch of Daredevil and then start The Haunting of Hill House. I’m intrigued by the new Chilling Adventures of Sabrina, but while I’ve heard good things about it I’ve also heard that it’s something like Riverdale, which I don’t care for. We’ll see.

And with that, I’m signing off. I need to head to the grocery store and pick up a few ingredients to finish off the cake I made for my bookclub’s get-together this evening. It’s hard to make cream cheese frosting when you don’t have any cream cheese.