It’s been lovely around here for the past week. Absolutely perfect weather and brilliant Fall color, but today dawned gray and cloudy and the leaves are quickly falling. November always gets grayer and darker with every day that passes. I will miss October.

In spite of the (mostly) fantastic month, I didn’t get a lot of reading done compared to previous months. It almost seemed like I was moving toward a reading slump in the last week and a half or so, but I think I was just being fidgety about what to read next. The slump-that-wasn’t is over, and I’m looking foward to several titles. It’s just a matter of figuring out what to start with.

What I Read in October:

When written out like that, it looks like I accomplished a massive amount of reading, but most of these books were novellas, and very quick to get through. I recommend the Penric and Desdemona books by Lois McMaster Bujold to anyone who reads fantasy. Bujold is an underrated author in the bookish community, despite her many awards and fantastic books and characters. The Penric novellas are full stories on their own and won the Hugo Award for Best Series last August. They’re quick reads, so give them a try if you’re looking for and unconventional fantasy story.

The Traitor Baru Cormorant by Seth Dicksinson was a masterpiece of political fantasy with the most morally gray of protagonists outside of George R.R. Martin’s A Song of Ice and Fire, and I think even Martin hismelf might have thought twice about writing the sort of ending that Dickinson did. The sequel, The Monster Baru Cormorant came out yesterday. This is a book full of strong and diverse characters. If you’re looking for a story on the scale of A Song of Ice and Fire but without the commitment to multiple 800+ page books, give The Traitor Baru Cormorant a try.

The Haunting of Hill House by Shirley Jackson is a masterpiece of horror writing. Though the writing can seem old-fashioned at times, a close reading shows deep psychological issues running beneath the surface of each of the characters, and the house itself is a sinister force affecting them all. I don’t get unnerved by books and movies, but The Haunting of Hill House managed to do it multiple times.

Trail of Lightning by Rebecca Roanhorse is the first in a futuristic urban fantasy series that takes place in the Navajo nation, where magic and ancient spirits have come back and monsters lurk in the forests and hills, preying on those unlucky enough to cross their paths. Though it’s written in the present tense, and I don’t generally care for the present tense, the characters and story were enough to draw me into it and keep me reading. It’s great to see a new series like this that doesn’t feature European spirits and creatures plopped down in the US. I’m looking forward to the second book, which comes out in April.

The Heroine’s Bookshelf is basically a series of short biographies of the writers who made iconic characters like Lizzie Bennet and Anne Shirley, emphasizing a characteristic like optimism or determination, and how they featured in their books. It’s a so-so book about books, but might be helpful for teens who are confused about their own lives and looking for a literary role model.

Lastly, Steering the Craft by Ursula K. Le Guin is a writing guide that emphasizes the nuts and bolts of writing– punctuation, sentence length, musicality of language, point of view, etc. It seems like most of the writing advice out there is “Avoid these tropes if you want a successful story”, and no one at all seems to talk about punctuation and sentence length. As these elements are absolutely essential to structure, meaning, and clarity, it baffles me why more advisors don’t talk about them. Granted, it’s easier to make a bullet point list of character cliches to avoid but when you get right down to it, you can’t craft a good piece of writing if you don’t know the fundamentals of it. This is a great book for anyone who wants to improve their writing skills.

I didn’t watch very many things this month, but the third season of Netflix’s Daredevil was definitely the highlight. It was so much better than the wandering second season, and even better than the fantastic first season. Matt’s broken down when the season opens, and it’s almost painful to watch him try to come back from what happened at the end of The Defenders. He gets pretty insufferable, too, but fortunately there’s a new character that calls him on it and doesn’t put up with him when he’s feeling sorry for himself. Vincent D’onofrio continues to be the best of the on-screen Marvel villains (I mean, who else can pull off monologues like he does?) and the episode that details Karen’s background, called simply ‘Karen’ really shows why Karen behaves the way she does through the entire series. Plot points laid down in the first season are now paying dividends. I wish the rest of Netflix’s Marvels shows were this well made.

Next month, I plan to start watching Chilling Adventures of Sabrina and The Haunting of Hill House on Netflix. I don’t confine my creepy television to October. I like to keep Halloween in my heart all year ’round.

I don’t have a particular reading list set up for November. It’s a very busy month for me, so I don’t know how much reading time I’ll have, or if I’ll just want to plop down on the couch and watch a movie when I get home at night. I’ll also be doing my Christmas shopping during this month, though because I mostly buy people books I get to spend that time in bookstores.

November is apparently a month for novellas. Novella November. I couldn’t find any information on the actual challenge, so I just pulled a handful of novellas off my shelves and but the on the TBR shelf. Willa Cather’s O Pioneers!, Virginia Woolf’s Mrs. Dalloway, and Yasunari Kawabata’s Snow Country, are all on there. I’ll try to get to them, but if I don’t I’m not going to worry too much about them. They’ll still be on my shelves later on.

I also want to start reading The Eye of the World by Robert Jordan. It’s a bit shocking to me that I’m interested in it. I first read The Wheel of Time my sophomore year of college. I read the first few books in a few days each, and as the series stretched out it took longer and longer for me to get through them, until it took me over a month to finish book nine, Winter’s Heart and that was only because I skipped sections that weren’t from the POV of any of the main characters. After that slog, I couldn’t stand the series and was glad when it was finally over so I could stop hearing about it from my friends. But after Daniel Greene’s many discussions of the series on his BookTube channel, my interest has been picqued. So I picked up the first book, The Eye of the World a few weeks ago and am actually looking forward to starting it.

I’m also interested in the Malazan Empire series by Steven Erikson. I’d heard a few things about it on Daniel Greene’s BookTube channel, and then I read a Tor.com article about this series, and how its egalitarian magic system means that anyone, regardless of gender or whatever, can take and have power. This has created a society without gender stratification, and while male characters might hate female characters (and vice versa), it’s because of politics or personal dislike, not sexism. The first book is Gardens of the Moon, and I have the library’s lone copy on hold.

And with that, I’ve gotta go do things! It’s my day off, it’s dreary out, and I have bookstores to visit. I don’t really do the costume thing anymore, but I re-dyed my hair again last night so it’s nice and burgundy again and my fingernails are freshly painted black. The black isn’t for Halloween, it’s just the color I’ve been painting them recently. 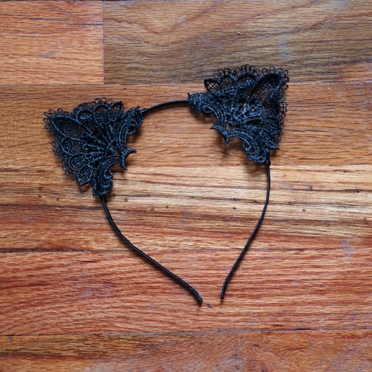 The sum total of my Halloween costume this year. Who doesn’t like lacey cat ears?