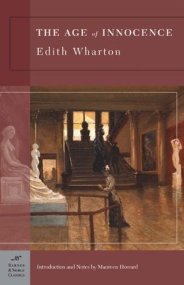 From Goodreads: Winner of the 1921 Pulitzer Prize, The Age of Innocence is Edith Wharton’s masterful portrait of desire and betrayal during the sumptuous Golden Age of Old New York, a time when society people “dreaded scandal more than disease.”

This is Newland Archer’s world as he prepares to marry the beautiful but conventional May Welland. But when the mysterious Countess Ellen Olenska returns to New York after a disastrous marriage, Archer falls deeply in love with her. Torn between duty and passion, Archer struggles to make a decision that will either courageously define his life—or mercilessly destroy it.

I’ve been intending to read any of Edith Wharton’s books for a long time, but I’ve never managed to get around to it. That’s going to change in 2019, though. I picked up a copy of Clifton Fadiman and John S. Major’s book, The New Lifetime Reading Plan in the hopes that it would point me to some major works of world literature that I should take a look at because, you know, educating yourself is a good thing. Several of Wharton’s books are on this list, so I picked The Age of Innocence at random from that list.

3 thoughts on “Goodreads Monday: The Age of Innocence”