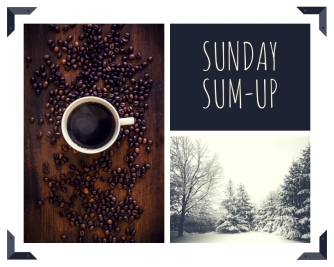 I don’t know where this week went. I remember it was cold and windy, and it snowed for two days straight, but otherwise? No clue. It went into the file of ‘lost weeks’, I suppose. And yet, for all that, I got a lot of reading and whatnot done.

I did a bit of baking, too. Chocolate and mint chip cookies, to be exact: 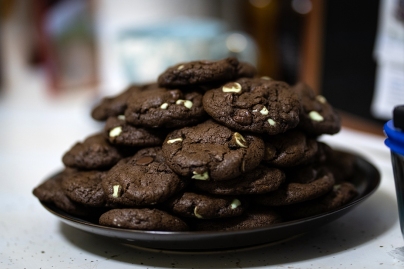 Also, I watched some of the movies that had been languishing on my Netflix queue:

This week, on Star Trek: Discovery, the crew of Discovery is hot on Spock’s trail thanks to information provided by Number One (as played to near perfection by Rebecca Romijn). While they’re catching up to Spock, though, a strange spherical complex traps them within a stasis field and infects the ship with a virus that makes all systems go haywire and instigates a medical condition in Commander Saru that will lead to his death. Sure, it’s a plot that’s been done before, but in the right hands it shines, and Doug Jones’s performance as Saru has never gone wrong. And if I could have an episode with nothing but Stamets, Tilley, and Reno in a locked room spouting technobabble and sarcastic barbs, I would be perfectly happy. ‘An Obol for Charon’ was a fantastic episode, and while the teary scenes between Burnham and Saru could have been a bit shorter, the rest of the events (including a Universal Translator gone mad, a bridge crew suddenly speaking a dozen or so languages, and a grouchy Saru chiding them all for not bothering to take language courses) more than makes up for it. 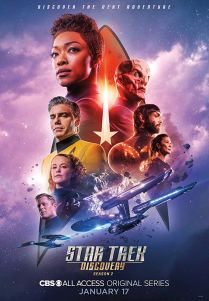 And Now for Books!

What I Read Last Week:

Captain Alatriste is filled with the sorts of swashbuckling adventure I always expected to find in The Three Musketeers, but with a character who displays more honor and character than those four famous Frenchmen. The story took turns I didn’t expect-especially at the end- and hinted at more adventures to come. I believe this is the first of a fiver or six book series, and I am definitely interested in reading more.

Exile’s Valor is the second of two books specifically about Alberich, a soldier from Valdemar’s longtime enemy, Karse, who was Chosen by a Companion and brought into exile in Valdemar, where his sense of honor both helps and hinders his adjustment to his new home and circumstances. In Exile’s Valor, Alberich must unravel a plot that threatens the security of Valdemar while still dealing with the banal-seeming everyday events, and an unexpected wedding. Between the two books, I prefer the first, if only because we see Alberich as the warrior he has been trained to be, rather than the intelligence operative he becomes.

Take a Thief is the story of Skif, a young thief-turned-Herald we first met in the Heralds of Valdemar trilogy. In those books, Skif is a charismatic prankster always skirting the edge of trouble, but who is essentially harmless. In Take a Thief, we see how that ‘cheerful prankster’ was a facade masking a darker character capable of far more than mischievous pickpocketing. This book could stand to be a bit longer and detail more of Skif’s pre-Herald life, especially his relationships with Deek and Bazie, who were keystone figures in his story. The ending felt a bit off, too, as Skif spends a good deal of time and effort trying to solve one mystery and then goes off on another track to solve another mystery that is hardly mentioned in the rest of the book. That said, it was overall an enjoyable story and fleshes out a popular character.

Magic’s Price is the third book of Lackey’s Last Herald-Mage trilogy and completes the story of Vanyel Ashkevron, the most powerful of Valdemar’s Herald-Mages, and the last Herald to have a last name. In Arrows of the Queen, we first see young Talia reading the ending of a popular retelling of Vanyel’s last stand, and this book gives us that story. The ending is tragic, the epilogue is even sadder, and the chapters leading up to the end are difficult to read due to horrendous violence a main character is subjected to. The first seventy-five percent, though, deals with the unraveling political situation in Valdemar thanks to its ailing king, a young and untried heir, constant fighting on the borders, and the fact that Valdemar relies more and more on fewer and fewer Herald-Mages. There are some pacing issues and a few moments where the characters’ words and actions don’t quite add up, but overall Magic’s Price is, like the rest of Lackey’s books, a work of literary catnip that is hard to put down.

Still working on The Queens of Innis Lear. Still enjoying it. It’s a slow, atmospheric read, and I am liking every page. I’m going through at least a few chapters most nights before bed.

I started reading The Queen of Blood by Sarah Beth Durst, but there was something about it that put me off it, so I downloaded yet another Mercedes Lackey novel via Overdrive to read during my lunch hour at work. It’s different from the other Valdemar books, as it doesn’t take place in Valdemar itself. It’s the story of Kerowyn, a girl who grows up in a newly ennobled house but does not want to become a noblewoman or wife. One night, her family is attacked and her brother’s new bride is kidnapped. As the only one left standing who has any martial skills, Kerowyn takes up a sword to rescue the girl and sets herself on a path toward danger and adventure she never imagined. Just ignore the late 1980s fashions featured in the cover art.

I spent three separate trips to the library trying to find a new audiobook to listen to but kept being thwarted by the fact that I couldn’t get there until about fifteen minutes before close and so skimmed over titles rather than having time to properly browse. I finally saw that they had some of Gail Carriger’s novels available, and so I gave Etiquette and Espionage a try. It is the story of a young woman, Sophronia, in early Victorian England (one complete with automatons, vampires, and werewolves) who prefers climbing trees to climbing into carriages, and so is sent to finishing school to turn her into a lady. But the finishing school is not what Sophronia’s mother thought it was. Yes, the girls learn how to dance and curtsey, but they also learn how to deal out death and espionage with impeccable manners. I’m only about twenty minutes in, and it’s already made me laugh out loud several times. 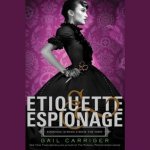 We’ve come to the end of The Two Towers in my The Lord of the Rings Reread. Frodo has a serious spider problem, and Sam has some hard choices to make in the last two chapters, ‘Shelob’s Lair’ and ‘The Choices of Master Samwise’. Catch up here: ‘Along Came a Spider‘.

That’s all for now! I’m hoping to have a productive reading week and get a couple of my February TBR books read before mid-month (how is it already almost the middle of February?!), and maybe get another few titles off my Netflix queue. The second seems unlikely, as I added a bunch of movies to my queue. But when you find some classics you’ve always been meaning to watch and remember that Netflix added the entirety of Monty Python’s Flying Circus, it’s hard not to add way too many things to the list.