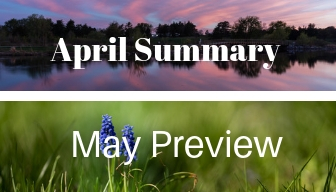 While the calendar is convinced that we’re well into spring, the weather doesn’t agree. It’s snowing in the western part of the state, while here it has been cold and rainy since Monday. Sure, we had a row of beautiful days last week, but now its almost wintry out. I’d say that I can’t wait for spring, but we’re in the midst of it. So they say.

Regardless of the weather, though, it’s been a good reading month! I wrapped up my Lord of the Rings reread project and finished up fourteen books besides that.

What I Read in April:

I completed April’s section of my 2019 Reading Plan with few problems, though my second work in translation ended up being Sword of Destiny by Andrzej Sapkowski, who is a Polish fantasy writer. My first work in translation, The Narrow Road to the Interior by Matsuo Bashō, was also my poetry selection for April as it is a collection of haiku. It was completely brilliant and charming and features some wonderful travel writing in addition to the simple-seeming poetry.

My favorite read of the month was Wolf Hall by Hilary Mantel and the book I was the most ambivalent about was The Priory of the Orange Tree by Samantha Shannon. The worldbuilding was great, but the character and plot development were lacking throughout most of the book. I’m trying to decide what to do with my copy. Do I keep it? Do I take it to the used bookstore for credit toward other books? I’m not going to read it again, but it is very pretty…

I have a few books I’m carrying over into May. I wanted to finish City of Illusions by Ursula K. LeGuin before the end of April, but that ended up not happening. Like LeGuin’s other books, City of Illusions demands your attention and because I’ve been reading it before bed when I’m already sleepy, I haven’t been making as much headway as I would have hoped. It doesn’t help that I’ve been reading the Library of America edition bind-up for Planet of Exile and City of Illusions, and the pages are so thin that it’s hard to turn a single page at a time. I usually end up turning two or three pages at once, realizing that I’ve done so, and then having to peel them apart to get to the correct page. Not fun. As nice as the Library of American edition is, I’m going to read other editions of LeGuin’s Hainish Cycle if only so I can turn the pages correctly.

I’m about 60 pages into Bill Bryson’s Shakespeare: The World as Stage, which is a nonfiction book about (surprise!) William Shakespeare and his world. There are very few records about Shakespeare’s actual life (which, as Bryson points out early on with examples of how little we know about other Elizabethan playwrights, is not all that surprising), and so he infuses what little we do know with the contemporaneous history and culture of London. It’s a fascinating and often hilarious look at an era and a man whose work lives on to this day, but about whom we know next to nothing.

Blameless by Gail Carriger and The Witch Elm by Tana French are the two audiobooks I’m listening to right now. Blameless is the third in Carriger’s Parasol Protectorate series, and while it’s a delight to listen to, I often find myself wishing I could speed up the CDs in my car, since the narrator, Emily Gray, often reads very slowly. Especially when she’s doing the voices of the side characters. The Witch Elm is exactly the kind of story I expect from Tana French in the way it slowly unwinds. I’m not very far into it, but it’s the sort of story I can see myself listening to while losing track of the time doing housework.

What I Plan to Read in May:

This is a do-able list. It totally is. I mean, most of these books are either not that long, or should be super interesting. And there’s no possible way I could get side-tracked by the used bookstore or the library. No way at all.

Mind the sarcasm on your way out…

I have a couple of library holds out there, too, but I don’t know when they’ll come in so I’m not going to include them for my May TBR, just in case. The holds are Storm of Locusts (The Sixth World #2) by Rebecca Roanhorse and The Crystal Stair (Legends of Gom #3) by Grace Chetwin.

I also have a couple of ARCs from Netgalley that I need to read before the end of the month:

Like everyone else in the world, I am watching the eighth and final season of HBO’s Game of Thrones and hoping that my favorite characters make it to the end of the show. There have been some close calls, but so far my favorites are still alive. We’ll see if they’re still standing at the end of all of this.

I want to see if I can at least start watching the third season of Versailles, the fifth season of Ripper Street, and the second season of The Last Kingdom, all of which are available on Netflix in the US. I’d also like to get caught up on Victoria, which I’m hoping is still available on PBS’s streaming service. Since I’ve devoted so much time to reading this year and very little to television, I doubt I’ll get to all of these shows this month, but it’s good to keep them in mind for those times when I’m at home and don’t actually want to read a book.

3 thoughts on “April Summary, May Preview”