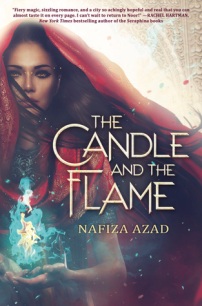 The Candle and the Flame
by Nafiza Azad
Fantasy
416 Pages
Published May 14, 2019, by Scholastic Press

The Silk Road, a network of medieval trade routes stretching from India and China to southern Europe, has long existed in the Western imagination as the source of all things exotic. But for the millions of people who lived along these routes for the centuries of their use, the Silk Road was simply “home”, where constant travel and trade allowed for the meeting and blending of cultures, religions, and languages. In her debut novel, The Candle and the Flame, Fijian-Canadian author Nafiza Azad, tells the story of the fantastical city of Noor, a stop on the trade route where the Ifrit (spirits of fire and order in human form) coexist with humans. Though life is peaceful in Noor, it hasn’t always been so. Eight years earlier the Shayateen (spirits of fire and chaos) swept through the city and slaughtered all but three people. Fatima was one of those survivors, though she doesn’t know why she and the other two were spared. Now, as a young woman, Fatima works as a messenger. When she delivers a book to one of the most powerful Ifrit in Noor, it leads to his death– and to Fatima’s transformation.

But what, exactly, does Fatima become? This question is one of the central mysteries of The Candle and the Flame, and the answer isn’t wrapped up at the end with a neat little bow. For some stories, that would be a weakness but it proves to be one of the strengths of this one. Fatima’s spiritual fire makes her something more than human, but her human heritage makes her something more than Ifrit. In this, Fatima is like the city of Noor itself– part Ifrit and part human and doing its best to make peace with itself in spite of the differences between its many residents.

“People, Firdaus told Fatima Ghazala, are afraid of death for two very different reasons, The first one is obvious: They do not know what, if anything, lies beyond the veil. That is a matter of faith. The second reason is also obvious: People are being afraid of being forgotten. They live their lives carving themselves spaces in time and history only to be forgotten anyway. Even those who gain fame or notoriety fall victim to time; what people remember are not the individuals directly but as they were experienced by the people who knew them. A person’s truth, a person’s essence, fades with a person’s death. That is simply the way of life.”

Though The Candle and the Flame is not an action-packed tale of adventure and romance, it delivers a story filled with richly developed characters and a depth of worldbuilding not often found in YA fantasy. The many female characters feel like living, breathing people with their own histories and wants, with each of them seeking to carve out their own spaces to live life as they choose, whether those choices adhere to cultural expectations or not.

While Azad’s worldbuilding and character development are excellent, her pacing and prose reveal her status as a debut author. The plot often wanders, and it’s not until the last hundred pages or so that the tensions within Noor come to a head. The prose itself is studious, as though Azad tried so hard to ensure the correctness of each sentence that she overlooked the prose’s overall flow. The result is sometimes stilted passages and dialogue that feels a awkward. Assuming Azad continues to write, she will undoubtedly improve her pacing and prose. Taken as a whole, The Candle and the Flame is a promising start to a young writer’s career.