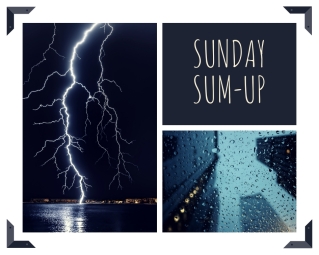 It was a quietish week around here, though work was a bit stressful. Fortunately, I swapped days with a coworker and took Saturday off, so I ended up with a three-day weekend. I had zero plans, except for cleaning my apartment and reading. I did go out with a friend on Friday evening. We wanted to try out the Thai rolled ice cream place downtown. It was fine. It was perfectly good ice cream with whatever toppings you wanted, but it was rather pricey for what it was. Next time, we’ll probably just stick with the homemade ice cream shop in the historic district.

My friend and I also walked to three of the downtown bookstores, though we didn’t end up buying anything. Still, it was fun to get out and about with nowhere to be and no timeline. The only problem was the humidity– they’d been predicting thunderstorms for days, but nothing ever happened. It didn’t even rain. So there was all this horribly muggy air, just waiting for a storm to dry it out. And there was no storm!

I made a major effort to finish Dune at the beginning of the week so I could move on to the next book in the series, Dune Messiah. You can read my thoughts on my reread here.

The Eye of the World was for a buddy read with Jackie at Death by Tsundoku. We’ve both read it before, but I hadn’t read it since 2001. There were a lot of things I remembered, but even more that I had forgotten. And what was with that weirdo ending? There will be more thoughts on this later.

The Long Call is the first of a new mystery series by Ann Cleeves, writer of the Vera and Shetland mystery novels, which have been turned into hit TV shows. I’ve only read Raven Black, the first of the Shetland mysteries, but The Long Call has the same sort of feeling to it– quiet, a bit lonely, and windswept. It almost suffers from too many points of view, which makes it feel a little choppy, but on the whole, I liked it. It kept me guessing in its quiet way. I wish there had been more from the perspective of the primary detective, Matthew Venn. Perhaps we’ll get more from him in later books. There will be a longer review up a little closer to the publication date.

The end is near in Lethal White, and I have no idea whodunnit. I can tell you, though, that if the world didn’t already know that Robert Galbraith J.K. Rowling’s pen name, you’d be able to tell that a woman had written this book based solely on a particular hiding spot for a particular item. 99.9% of men would have either been too squeamish to write it or wouldn’t have thought about it at all. I am still waiting for Robin to twig to a particular fact about Matthew, but given that she’s focused on the investigation, I’m cutting her some slack.

I’ve only just begun Daughter of the Forest. No thoughts on it yet. 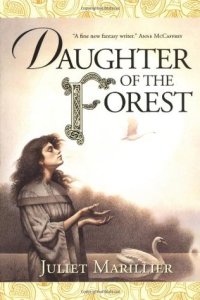 Shetland, season 4. Starring Douglas Henshall, Allison O’Donnell, Steven Robinson. Based upon the murder mystery series by Ann Cleeves, Shetland is set on the remote Shetland Islands off the northern coast of Scotland. It often has a lonely feel, as though the isolation of the islands seeps into the narrative, though their culture is ever-present and the characters never feel trite or unrealistic. In season four, Detective Perez investigates the newly-reopened case of a murdered reporter, now that the man who was convicted of the crime has been released. Suspicions and emotions are running high, and it’s up to Perez to close the case before history repeats itself. (I borrowed the season on DVD from the library)

I tried listening to The Legendarium podcast on the recommendation of a BookTuber I follow, but my enthusiasm quickly died out after I discovered that they really only talk about very popular fantasy series written by white men. I get the appeal of popular works, but in something like five years’ worth of episodes, I found a scant handful of episodes devoted to works by women– the Farseer trilogy by Robin Hobb, Doomsday Book by Connie Willis, and what I think was an independently published book by a woman whose name I don’t remember.

Now, I get it. The books the panelists talk about are very popular. Talking about Robert Jordan, Brandon Sanderson, Scott Lynch, Patrick Rothfuss, and Brent Weeks is a surefire way to build an audience. But why are so many BookTube Channels so focused on those same authors time after time? Are they afraid to take a chance on an author they’re unfamiliar with because they’re afraid they’ll spend their time on it and not like it? If so, that feels like a lame excuse to me, because you take that chance even with your favorite authors.

Or maybe it’s just me. I’ve read nine Steven King books, and none of them really did anything for me. I read Brent Weeks’s Night Angel trilogy, and it didn’t capture my attention very much, either, so I’m not too inclined toward Weeks’s other books. My opinion of Scott Lynch’s Gentlemen Bastards series declined with each successive book in the series, so I’m not anxious to continue with that. As for Rothfuss, well, I enjoyed the Kingkiller Chronicles while I was reading them, but it’s been seven years since I finished The Wise Man’s Fear, and I have lost interest in the intervening years. I know there is a release date for the third book, The Doors of Stone, but I will believe that when I see the actual book sitting on the shelf at Barnes and Noble. And I still probably won’t be interested in it. I admire Brandon Sanderson’s ability to crank out quality work like he’s a writing machine set on ‘high’, but I’m really only interested in the Stormlight Archive books (I thought the Mistborn trilogy was good, but it didn’t blow my hair back or anything).

My opinions of these books are definitely in the minority, though. So I guess I’ll just have to keep trying new BookTube Channels and new SFF podcasts to find stories that are different and captivating.