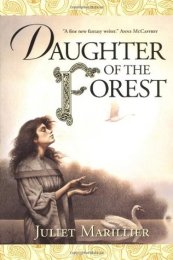 Sorcha is the seventh child and only daughter of the Lord of Sevenwaters and though her mother died at her birth and left her without female companionship, Sorcha’s brothers adore and protect her. She is the light of their lives, and she loves them just as fiercely. But when their besotted father brings home a new wife, Sorcha and her brothers know their lives have taken a turn for the worse. Lady Oonagh is as wicked as she is beautiful and when she becomes pregnant she is determined to make her child the ruler of the mystical land of Sevenwaters. She lays a curse upon the brothers, which Sorcha barely escapes. Aided by the Fair Folk, Sorcha finds refuge in the forest and discovers a way to free her brothers from the curse: she must weave six shirts from a stinging plant and cannot utter a word while doing so. Nor can she tell her story in any way, whether by voice, writing, or sign. To do so means her brothers will be lost to her forever.

But when Sorcha is taken by enemy forces and brought to a land far from her own, she discovers that her task will take her down a road darker than she expected and that in this strange land, her heart’s desire may be far different from what she ever thought it would be.

Daughter of the Forest, the debut novel from New Zealand-born author Juliet Marillier, is based upon European folklore and set in Ireland during the Viking era, when alliances between neighbors were shaky at best, cemented only by the greater threat from across the sea. In Marillier’s legendary Ireland, the mist-shrouded forests and rocky hills become a place of deeper magic, where ancient beliefs combine with the encroaching Christian faith, and where the Fair Folk– the faeries of old– still wander the woods and influence the lives of the people who live there, sometimes for good and sometimes for ill.

As Sorcha is beloved of the Fair Folk, they protect her in her time of need, though even the Lady of the Forest cannot overturn the curse laid upon her brothers. That work falls upon Sorcha. And it is work, for she much harvest the stinging starwort, turn its fibrous spines into thread, weave the fabric, and then sew the shirts, all without uttering a sound.

“Perhaps I was stupid to believe I could lift the spell. Too many stories, you might say, a head too full of old tales, where it’s just a matter of completing the tasks, and then the hero wins his heart’s desire. But I was not that foolish, even then. I had once told Simon he could make his tale end any way he liked. but this was not strictly true. I set my path straight ahead; but there were others that influenced its course, that diverted and changed and confused it. And as the Firest Lady had warned me, even at the start it would be very hard. Far harder than I had believed it could be when I had first listened white-faced to her description of my task.”

It is the requirement of Sorcha’s silence that makes the story so poignant and her struggle so difficult. As a healer who held to her people’s traditions and stories, Sorcha is accustomed to using storytelling as part of the healing process. Tales of lovers who persevere and heroes who refuse to give up are as vital to her patients’ healing process as the herbs she gives them. Stripping the storyteller, then, of everything up to and including the ability to say her own name is particularly cruel. As human beings, we are the culmination of the stories we tell ourselves. What becomes of us when we are unable to give voice to our stories? Sorcha must endure death and hardship in silence. When she is taken to a faraway land, she is given a new name, must deal with the gossip of the household’s women, and resist the lustful advances of an odious man. Because she cannot speak, Sorcha’s identity among her new home rests on what those around her want to believe about her.

In this, Daughter of the Forest tells more than just Sorcha’s story. Tales of women being silenced are older than the hills and continue today. Sorcha’s inability to tell her story is nothing new to women who have been interrupted, talked over, had their professions Mansplained to them, or more sinisterly, been attacked or murdered for speaking up. Though not every woman will go through such harrowing experiences as Sorcha, we have all undoubtedly wished to be heard and believed. It is because of this that Sorcha’s silence is ultimately redeemed that the ending is so satisfying. Her love, her work, her sacrifice, and her silence do not go unrewarded. Though she never lifts a sword or strikes a blow, Sorcha’s perseverance and quiet strength make her the strongest character of them all.

4 thoughts on “Book Review: Daughter of the Forest”