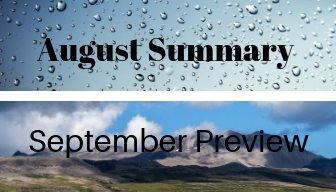 August was a solid reading month, though I didn’t pick up two of the books on the TBR stack from the beginning of the month. Oh well. I got through most of the books I intended to read, plus the three ARCs I needed to finish before their release dates in September. Good job, me!

What I Finished Reading in August:

Fourteen books, all told! Stats-wise, 64.7% of the authors I read were women and 35.7% were men. I read one book in translation, and that was from Chinese. 57.1% were physical books, 21.4% were ebooks, and 21.4% were audiobooks. Five books were science fiction, five were adult fantasy, three were mysteries, and there was one middle grade fantasy. Half the books I read in August came from the library, while 28.6% came from my own shelves, and 21.4% of them came from NetGalley.

I read a lot of wonderful books in August, though my favorite was The Curse of Chalion, followed by The Ten Thousand Doors of January. My least favorite August book was Section 31: Abyss, which was a mediocre Star Trek book. 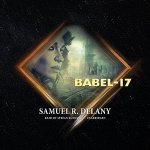 What I Plan to Read in September:

September is going to be an odd month, reading-wise. My trip to Iceland takes place right in the middle of the month, so that disrupts any reading schedule I might have come up with. This is not a complaint! It’s just a matter of coming up with what I can finish before I leave, what I will read on the plane, and what I can read once I get home and am dealing with jet lag. The list will be a fairly lightweight one.

Children of Dune, A Memory Called Empire, Ancestral Night, and Ancillary Justice are on the list for the Space Opera September readathon hosted by Thomas at SFF180. The basic part of this readathon is to read four space operas in September, and that’s the level I’m going with. There are a couple of paths and levels and prizes you can achieve by reading, say, novellas or books by and/or about women or non-binary people, but because my Iceland trip happens right in the middle of the month, I’m going with the first level. I requested Ancestral Night a week ago or so, and according to the wait list I should have gotten it about halfway through my trip, but the audiobook showed up in Overdrive Saturday night, and I started listening to it yesterday. So far it’s great. I will probably read A Memory Called Empire when I get home, and I will read Ancillary Justice whenever it arrives for me. I will read Children of Dune throughout the month. I suppose I had better start on it soon.

Storm Breaking is part of the Reading Valdemar project I am taking part in with Jackie at Death By Tsundoku and Melanie at Grab the Lapels.

Does it sound completely pretentious to take Burial Rites with me to Iceland so I can read the story in the country in which it happened? Because that’s what I’m doing. Burial Rites is the story of Agnes Magnúsdóttir, the last person to be publicly beheaded for murder in Iceland. After her conviction, Agnes is sent to an isolated farm in the northern reaches of the country to await her execution. Everyone is against her except her priest, who seeks to understand her. 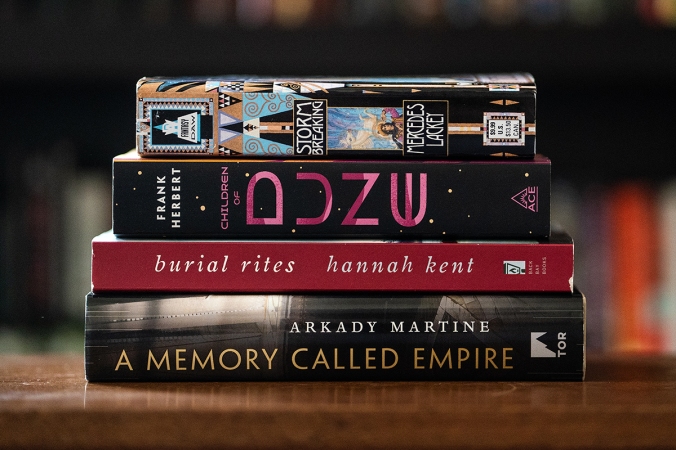 Other plans for September include going to Iceland! Because I haven’t been nattering on about that a lot lately. What can I say? I’m excited to go back! I’ll be there for a week, with two days in Reykjavik, two days in Vik, and two Days in Hofn. Then I’ll be driving back across the country on Tuesday, September 17, to get back to Reykjavik and spent my last night there before heading back to the US on Wednesday the 18th. I have a handful of places I specifically want to see, but I intend to be flexible about my itinerary, because you never know what’s going to come up. One thing I really want to see is the Northern Lights, so I am hoping for clear skies at night. I will definitely be posting photos and recapping my adventures when I get there.

One thing that is already better this time around is the fact that I don’t have tendonitis in my ankle!

A photograph from my last trip to Iceland: 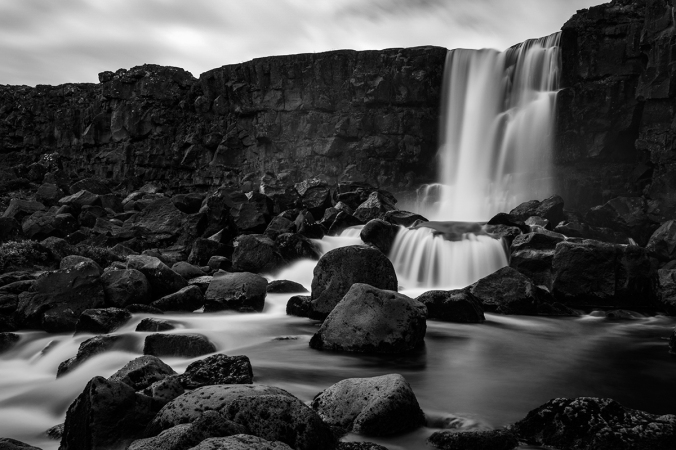 After that, my big plans involve a lot of photo editing, recovering from jet lag, and getting a car repair done. The photo editing is going to be great! The other two things, not so much.

So my September is going to be great, just not the most bookish. I’m perfectly okay with that, because travel is worth it.