On Friday morning, I left Reykjavik and drove east toward the little town of Vik on Iceland’s southern coast. But first, I made a stop at Skógafoss. This is one of Iceland’s most popular waterfalls. It has a single drop of 197′ (60m) and is 82′ (25 meters wide). On sunny days, you can see a rainbow in the mist the falls put off, and you can walk right up to the falls, though I wouldn’t recommend standing under them. The popularity of Skógafoss can be cause for frustration, given the sheer number of people visiting at any given time. On two occasions, I spent a good deal of time lining up a shot, only to have someone step right in front of me– one couple engaged in a dozen or so jumping poses, and another woman set up right in front of me to take pictures of a water bottle.

Readers, when you are at a popular site for photography and you see someone with a camera on a tripod, don’t assume that they’re not engaged in photography just because they’re not staring into the viewfinder. The long exposures I shot took about 30 seconds each and take a few minutes to set up, but because I wasn’t looking through the viewfinder, people would set up right in front of me, forcing me to start all over again once they had left. Landscape photography in popular destinations is an exercise in patience. 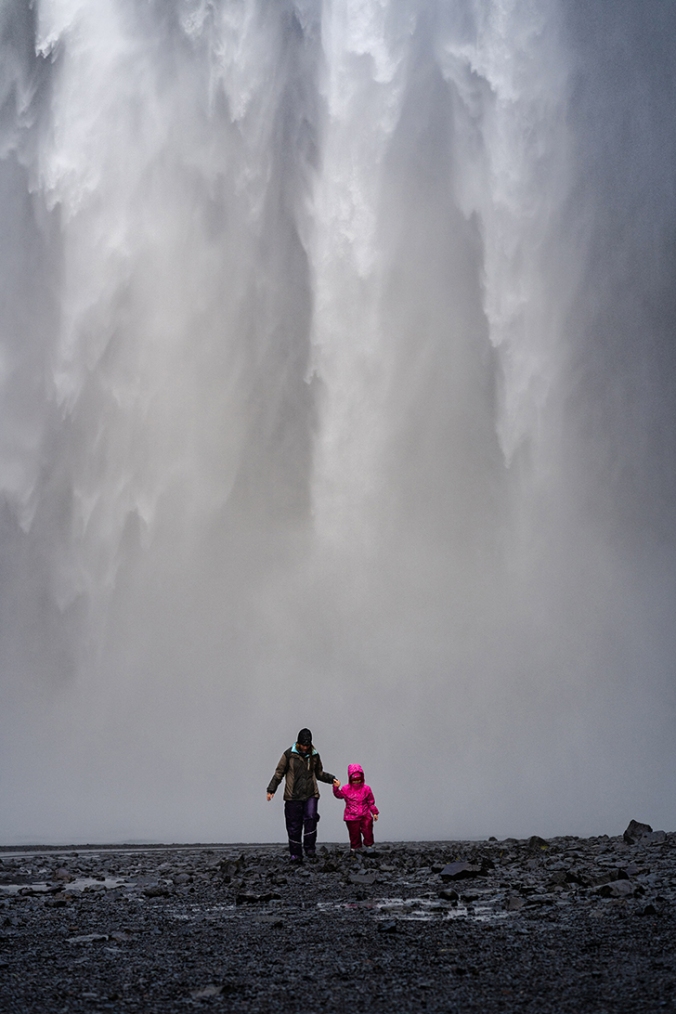 On the east side of Skógafoss, you will find a long stairway winding up the cliffs toward a platform above the falls. If you can manage the 370 steps, go through the gate at the platform and you’ll find yourself on the Fimmvörðuháls trail, one of Iceland’s most famous hiking trails which runs from Skógafoss at the southern end to Thorsmark in the north. It is about 15.5 miles (25km) long, takes you along the Skóga river past twenty-six waterfalls, through the lava fields below the Eyjafjallajökull and Mýrdalsjökull glaciers, through the glacial pass between Eyjafjallajökull and Katla where some of the world’s youngest landscapes are, before entering Godaland and crossing the Krossa river on the final stretch. If you are an experienced hiker, you can hike the entire trail on your own in one or two days during the summer months, but it is closed for the rest of the year. Less experienced hikers can still take the trail but are advised to hire a guide for the trek. Obviously, you don’t have to hike the entire length of it. I traveled along it for about a mile, and every turn of it was wonderful. Whether it was an amazing view of the canyon of the Skóga or yet another waterfall, every view was beautiful. And because there were far fewer people there than at Skógafoss, I didn’t feel obligated to move along to make room for someone else. Nor did people wander into my shots.

There came a point where a drop in the trail forced me to stop and turn back. It was not a long drop, but it was quite steep and given that a couple of more experienced hikers were having trouble with it, I decided that I would have even more problems. When it started raining again about fifteen minutes later, I decided my caution was wise. In the rain, with slippery mud, I would not have been able to climb back up it. 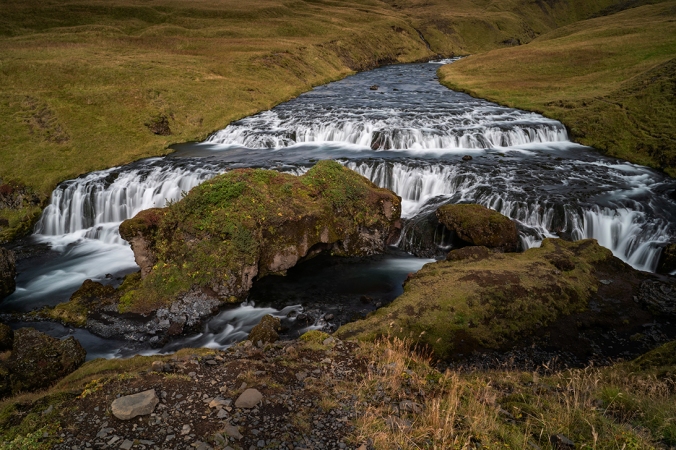 The first set of waterfalls above Skógafoss

More falls along the Fimmvörðuháls trail 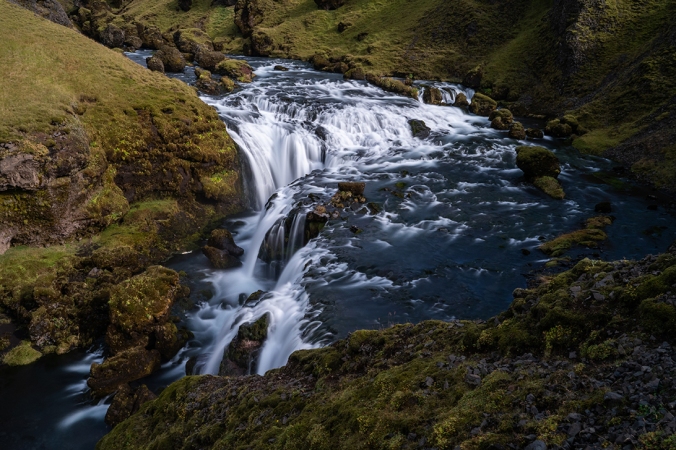 A wider shot of the same waterfall

The nearly untouched wilderness around the Fimmvörðuháls trail

As much as I enjoyed hiking the Fimmvörðuháls trail, at some point I had to get going. I wanted to go back to Reynisfjara beach, and I had to get to Vik to check into the hostel where I would be staying the next two days. So on I went.

I ended up taking a detour, though, before reaching Reynisfjara. I was looking for a particular sign for the beach, and when I thought I’d found it I turned, only to drive for another few kilometers before I realized I wasn’t going to the beach. It turns out that I was on the western edge of that particular area and was headed toward the cliffs of Dyrhólaey, where a spectacular set of cliffs and basalt columns arch into the ocean, and where a lighthouse has stood for decades- and still stands to guide sailors away from the rocks.

When I arrived, the tide was up and a cold wind blew off the mountains. Rain began falling minutes after I arrived, but I put the hood of my raincoat up and covered my camera and backpack with their rain covers and walked on. The waves were spectacular as they crashed against the rocks, though the one small beach was closed. There are two rock formations that jut up from either side of that beach, and the waves that wash over the sand can rise faster than you think. A tourist was washed away and killed in 2017 when he strayed too close to the water.

The beach was not the only place where you would have to watch for waves, though. The water is violent around Dyrhólaey, and even on moderately high cliffs, you can encounter spray from the waves. This makes the rocks slippery, so watch your step.

Looking west toward the main cliffs of Dyrhólaey

The black sand of Reynisfjara

After a while, I decided to head for Vik to check into the hostel and see about dinner. I am not a foodie, and when I travel I often forget to eat. I get too wrapped up in what I’m doing to think about my rumbling stomach. I had bought some groceries in Reykjavik, but I wanted to get at least one real meal that day.

But because I can’t have a vacation without getting lost at least once, I promptly got lost. I blame the GPS unit. I input the address for the hostel, and it sent me to the fire station in Vik. It turns out that, while The Black Beach Suites and its companion hostel, The Barn, has an address in Vik, it’s not in the town of Vik. It is on the other side of the mountain, Reynisdrangar along the road to Reynisfjara. Upon realizing that the GPS unit was not leading me the right way, I parked, turned the GPS off, and pulled out my phone to get the correct directions through the rain. Once I realized where I needed to go, it was easy enough to find the hostel. I got checked in (I’d booked a private room in the hostel, which was clean and had a great view, but I’m unsure of the building’s overall construction, given that my window didn’t want to close completely, and the bathroom tiles were loose), rested for a bit and got my room and evening plans sorted, then headed for the beach.

Reynisfjara is not a beach where you can swim. It’s Iceland. It gets cold, and the waves are high, even on a good day, and sneaker waves are not uncommon. Tourists have died at Reynisfjara, just as they have at Dyrhólaey, making this the deadliest stretch of beach in Iceland. It is still popular and beautiful, but if you go, make sure you always keep one eye on the ocean. The beach is bounded on the east by the mountain, Reynisdrangar, and on the west by Dyrhólaey.

Looking west toward Dyrhólaey. And yes, that is a bridal couple in the distance. Reynisfjara is a popular spot for photographic sessions. 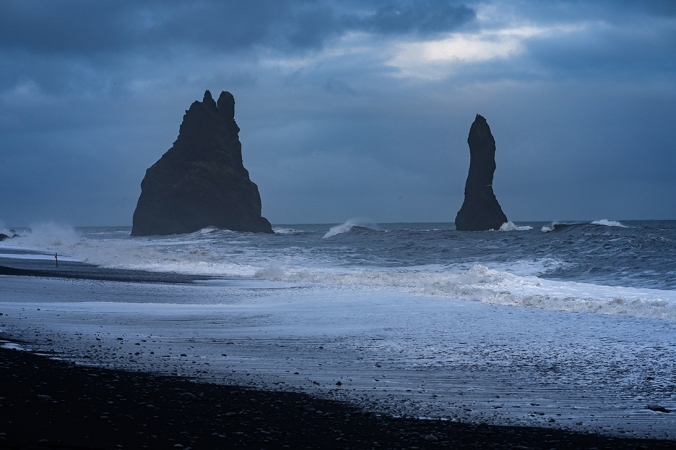 The basalt columns below Reynisdrangar

After eating dinner at the Black Beach Restaurant just above Reynisfjara, I spent the next while taking pictures of the waves, the cliffs on either side of the beach, other tourists, and rocks on the sand itself. Finally, though, the darkness forced me to head back to the hostel. My feet needed a rest, and I wanted to get an early start the next morning.

Next: Hundafoss, Svartifoss, Vatnajökull National Park, and then back to Reynisfjara