We haven’t quite closed the door on 2019, but the last weeks of December are a perfectly good time to look ahead to the book releases I am most looking forward to in 2020. I’ve listed them in chronological order, though the dates could change.

In 1492, Maddelena Moretti arrives in Rome from her home in the countryside. She becomes a servant in the Vatican. There, she becomes entranced by Cesare Borgia, son of the newly elected Pope Alexander VI. As battles rage and politics twist ever more treacherously, Maddelena grows more entwined in the lives of the Borgia family. As the keeper of dangerous secrets, Maddelena must decide if she is willing to become a pawn in a greater game, while Cesare must reckon with his nearly limitless ambition.

We’ve all heard the story of the orphan boy who discovers he has great power and uses it to fight the evil that threatens his world. But what if that boy and the great evil were one and the same? Seventeen-year-old Annev de Breth is a student at the Academy, where he is learning to become a warrior-thief, but he struggles with forbidden magic, a hidden deformity, and mysterious heritage. When events force him into a dreadful choice, Annev embarks on a quest where he must come face to face with the dark nature of what he may become. 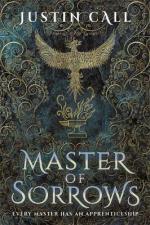 Five years after their meeting in the events of The Watchmaker of Filagree Street, Thaniel Steepleton and Keita Mori are on their way to Japan. The English government is sending Thaniel to Yokohama to investigate a series of hauntings, while Mori has personal business in his home country. But something is frightening Mori, though he will not say what it is, and when he vanishes under mysterious circumstances, Thaniel must work with an old friend of Mori’s to find out what is happening.

It is the spring of 1536. Anne Boleyn is dead at the hands of a French executioner, and Henry VIII is preparing to marry Jane Seymour. And Thomas Cromwell’s star has never been higher. He intends for it to rise even higher, though. He has no noble blood or family line to rely upon– only his wits. As England plunges deeper into the civil and religious strife, Cromwell must stretch his wits to the limit to keep his place at Henry’s side in this final volume of Mantel’s Booker prize-winning trilogy.

Veronica Speedwell and her partner in crime-solving, Stoker, are asked by Lady Wellingtonia Beauclerk to help with a scandal that could rock the royal family to its core. The madame of London’s most exclusive club has received a gem easily traceable to the prince, and the royal family wants it back. Veronica and Stoker reluctantly agree to go undercover at the club, where a body turns up. Secrets whirl about the royal family and Veronica and Stoker must get to the bottom of it all before it’s the end of all of them.

Yumeko, a half-kitsune girl, has given up a sacred scroll to save everyone she loves from imminent death. Now she and her friends must race to the cliffs of Iwagoto to stop the master of demons from calling upon the great dragon. Meanwhile, Tatsumi finds himself forced to work with another demon to help Yumeko, stop a madman, and save himself from the demon. But no matter how pure their intentions or how hard they try, Yumeko and her friends may not be able to stem the tide of evil that is rising around them.

Murderbot wants nothing more than to be left alone to watch its shows. Human society is strange and upsetting, and tries its patience like nothing else. But when Murderbot’s favorite humans (not friends) are captured and another not-friend from the past needs help, Murderbot must choose between doing nothing and taking drastic action.

When Noemí receives a desperate letter from her newly-wed cousin, she immediately goes to her cousin’s new home of High Place, a mysterious mansion in the Mexican countryside. She knows very little about the area, and her cousin’s husband is a stranger to her. And while Noemí is an unlikely rescuer, she is bold, smart, and unafraid of what she finds in High Place, even when she begins having dreams of blood and terror. With the help of the family’s shy youngest son, Noemí begins to unravel the terrifying secrets within High Place. But the more she finds, the more she begins to wonder if she will ever be able to leave this strange house.

The Seven Sisters (London Below #1) by Neil Gaiman – September 15

There is no synopsis available for this yet, but it is said to be the long-awaited sequel to Neil Gaiman’s Neverwhere. It is inspired in part by Gaiman’s work with the United Nations’s refugee agency. The only thing you need to tell me about a book is that it’s written by Neil Gaiman. I’m already sold on it.