Star Trek: The Next Generation premiered in September 1987. I was five years old. That’s a bit young to make a Star Trek fan, but my dad and brother were excited about it, and I thought they were great, so I was excited about it, too. It would be a few more years before I understood was the show was about, and by that time we were getting some of the best episodes in Star Trek history (both before and after). Episodes like ‘Yesterday’s Enterprise’, ‘The Best of Both Worlds pts. 1 & 2’, ‘The Inner Light’, and ‘Darmok’.

I was eleven when Star Trek: Deep Space Nine premiered in 1993, and because it was airing during my formative teenage years, it became the show that shaped my sci-fi tastes the most, and remains my favorite Star Trek show. But TNG is what put me on the SFF road in the first place.

Obviously, I renewed my CBS All Access subscription to watch the premiere of Star Trek: Picard last night.

Patrick Stewart as Picard, and his faithful pit bull, Number One (source: IMDb)

Picard is set in the Prime universe, not the so-called Abramsverse (the alternate timeline J.J. Abrams established in his 2009 Star Trek reboot film). A star in the Romulan system went supernova, wiping out the homeworld of one of the Federation’s greatest enemies. Then-Admiral Picard convinced Starfleet Command to lead the most extensive evacuation mission in history, thereby saving the Romulan civilization. At least in part.

But no good deed goes unpunished. In the chaos ensuing the destruction of the Romulan star system and the ensuing evacuation, a band of Synths– artificial lifeforms– attacked the colony on Mars, destroying the Starfleet shipyards of Utopia Planitia and killing more than 92,000 people. Years later, the upper atmosphere of Mars is still on fire. Starfleet’s reaction was to ban all synthetic lifeforms– that is, all androids.

This was the last straw for Picard, who had to remind Starfleet Command that it wasn’t just 100,000,000 Romulan lives at stake in the evacuation. It was 100,000,000 LIVES. He has long butted heads with Command over their willingness to see the Federation’s enemies as faceless “Other” figures worthy of destruction. He has always tried to see the humanity in even his worst enemies (such as in season five’s ‘I, Borg’, which will apparently have ramifications later in this first season of Picard, given that Jonathan Del Arco will be returning as the individual Borg, Hugh).

After Synths were unilaterally banned, Picard resigned his commission in protest and returned to his family’s vineyard in LaBarre, France. He’s lived there in quiet seclusion with two Romulan friends ever since, writing histories and refusing to grant interviews.

When a young woman shows up on his doorstep looking for help, though, Picard can’t refuse her. The young woman, Dahj, was attacked by a group of armed men. They murdered her boyfriend and would have kidnapped her, except she saw a ‘bolt of lightning’ and suddenly knew how to fight the men off. She fled the scene, terrified by the attack and the sudden changes in her own mind.

What Picard finally puzzles out is that Dahj is a Synthetic lifeform, and the attack triggered certain programming within her. He determines that– because of the sophistication of her creation, Dahj must have something to do with his old friend Data, a rare Soong-type android who served on the Enterprise, but who died twenty years earlier. This connection means that Picard feels an obligation to help Dahj, no matter what. It’s a connection that will change the course of his life, and perhaps alter the course of history itself. 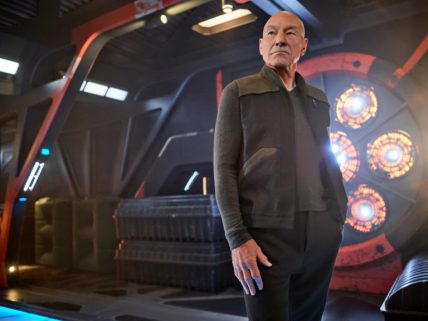 I’m sure there are Star Trek fanboys who will howl about this show. Something about continuity or aesthetics or daring to mention anything from the 2009 J.J. Abrams film. Or maybe they’ll whine about how the Federation and Starfleet are organizations devoted to the betterment of all life forms and rising above baser instincts and blah, blah, blah.

To them, I say “Bah!”. Starfleet has not always been a lily-white organization. Data had to fight to be recognized as a sentient being, or risk being deconstructed so scientists could figure out what he was made of (season 2, ‘The Measure of a Man’). They sold out Federation colonists to the Cardassians because it made some negotiations easier (season 7, ‘Journey’s End’), they sent a judge to the Enterprise who was perfectly happy to persecute an ensign for being half-Romulan (season 4, ‘The Drumhead’), and essentially ordered Picard to commit genocide against the Borg (season 5, ‘I, Borg).

Starfleet didn’t any shinier in Deep Space Nine, what with their willingness to put the entire planet Earth under martial law because a couple of Changelings showed up planetside (DS9 season 4, ‘Homefront’ and ‘Paradise Lost’), and while the virus that nearly wiped out the entire Changeling race could be blamed on the rogue black ops group, Section 31, Admiral Ross wasn’t all that upset about the possible destruction of an entire race of people (DS9 season 7, ‘Inter Arma Enim Silent Legis’).

I’m sure there are other instances, but these are the ones I can think of off the top of my head.

Starfleet has not always been so squeaky clean. Sometimes they’re awful. And don’t tell me it’s just a few admirals. You don’t get to be an admiral without having an awful lot of support from the higher-ups.

So Starfleet’s been a bit dodgy, and I’m sure they’ll have their justifications for that dodginess. They always do.

As for the aesthetics… Do you really want set designs to look like they did circa 1987?

I, too, am puzzled by the foam core statuary. (Source: IMDb)

What can we look forward to in the rest of the series?

I’ve always liked the Romulans. Sure, they’re an authoritarian military dictatorship, but the sly conniving of the enemies the crew of the Enterprise (and Deep Space Nine) encountered were always so fun to watch. The Klingons’ honor-based culture appeals to most fans, but I get tired of it quickly. Give me Romulans!

Especially Romulans who aren’t all dressed in spiky, quilted jackets with gigantic shoulder pads and have identical pageboy haircuts. Sure, the showrunners in the 80s and 90s were going for a unified “Romulan” look, but we get it already. 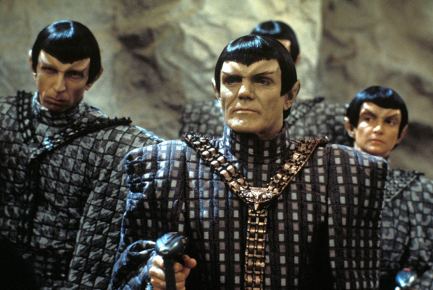 I’d be angry, too, if my uniform didn’t let me walk through a doorway like a normal person. (source: IMDb)

What we’ve seen in the first episode are Romulans with varied personalities. And curly hair! And beards! And a Romulan who is some kind of Samurai-type figure? I’m looking forward to seeing more of him.

I know Harry Treadaway primarily as Victor Frankenstein in Showtime’s Penny Dreadful. He was in an episode of the third season of The Crown and played a young heartthrob, which threw me for a loop. Harry Treadaway should not play a heartthrob. He is, at best, a morally gray figure supported by a fantastic script. It looks like he’s going to be a straight-up bad guy, and I’m all in.

TNG introduced the Borg as a villain early on in its run. They were a soulless collection of part-organic/part-cybernetic beings who assimilated entire civilizations into the Collective, wiping out their individuality and uniqueness. To become a Borg drone was to lose your identity– maybe even your soul.

Thanks to a few later episodes, TNG explored the idea of what could happen if a Borg drone were seperated from the Collective and forced to regain their individuality (‘I, Borg’, ‘Descent pts. 1 & 2). In ‘I, Borg’, Picard was forced to face a single Borg drone who developed an individual identity– something he was loathe to consider after having once been assimilated himself. But the Borg are back in some capacity, as  Jonathan Del Arco, who played Hugh in ‘I, Borg’ and ‘Descent pts. 1 & 2’ will reprise that roll.

Jeri Ryan, who played the cat-suited ex-Borg drone Seven of Nine in Star Trek: Voyager will also appear. Her role is as mysterious as any other right now. What has Seven been up to since Voyager‘s return to Earth? How has she been treated by other Starfleet personnel, given the visible reminders of what she used to be?

And what the hell are those Romulans doing in a re-constructed Borg cube???

I suspect the cube comes from one of the slipstream conduits Voyager used to get back to the Alpha Quadrant, and that Captain Janeway collapsed in order to keep the Borg out of Federation space in VOY‘s final episode, ‘Endgame’.

I’m a little conflicted about the way Voyager handled the Borg. It feels a little like they pulled some of the Borg’s fangs and made them less frightening. When the Borg Queen was introduced in the movie Star Trek: First Contact, Alice Krige did a tremendous job of making the Queen creepy and terrifying and weirdly sexy. It added a different dimension to the Borg, and I don’t think Voyager quite knew where to go from there. Granted, the show ended in 2001, before television started to get ‘gritty’ and ‘realistic’, but given what TNG started, Voyager‘s showrunners could have done better.

But I digress. Regardless of what they do with the Borg in Picard, it’s great to see Jeri Ryan as Seven again, and it’s even better seeing her in sensible clothes and even more sensible shoes. I hope she and Jonathan Del Arco get some great scenes together. 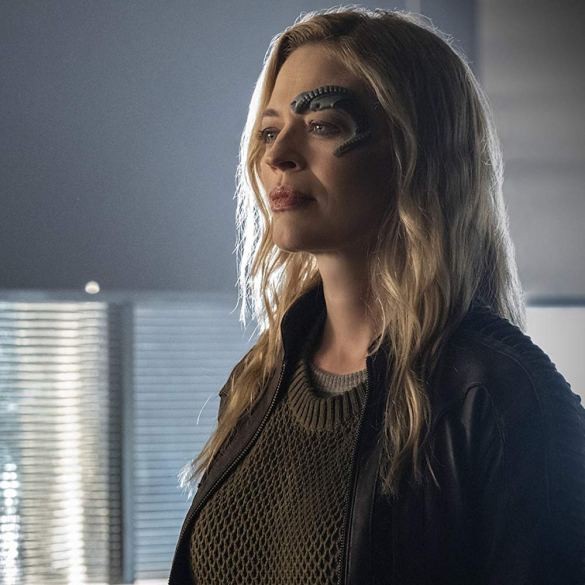 As far as pilot episodes of Star Trek, ‘Remembrance’ is a stellar beginning. It helps to have a basic understanding of Trek shows that have come before (otherwise, the significance of things like the cube-shaped ship, or the contentious relationship with Romulans) won’t make a lot of sense. But given that Netflix streams the previous four Star Trek shows (excluding Discovery, which is only available on CBS All Access in the US), it wouldn’t be hard to track down some of the highlights to get caught up.

Picard is a visually stunning show that promises to discuss issues that pertain to the current state of the world. That is something that Star Trek has always been great at, and Picard is off to a brilliant start.