State of the ARC is a meme hosted by Avalinah’s Books in which we round up our ARCs and attempt to wrangle them into something approaching order. Sometimes it’s like herding cats.

Not a whole lot going on for me over at NetGalley. I received two approvals in June and finished one review. Most of the books that were once on tap for June were delayed until August. I currently have nothing due in July, so it will be a bit before I have any new ARC reviews.

In 1828 Paris, the city is split between merciless royalty and the ring of nine criminal guilds who run the underworld from the Court of Miracles. Eponine (Nina) is a young cat burglar who steals from the rich by night and avoids her abusive father and protects her naive foster-sister, Cosette (Ettie) by day. But when Ettie catches the eye of the notorious leader of the Guild of Flesh, the Tiger, Nina vows to keep her sister safe. Her vow takes her to the glittering court of Versailles and may set off a war between the guilds.

After receiving a frantic letter from her newlywed cousin, Noemí goes to High Place, a mysterious mansion in the Mexican countryside. There, she meets her cousin’s husband, an alluring but dangerous stranger and his father, a patriarch who finds Noemí fascinating. The house itself seems to be affecting Noemí with dreams of blood and terror. Noemí’s only ally is the youngest son, a shy young man who seems to want to help Noemí, but may be holding secrets of his own. The deeper Noemí digs into the mysteries of High Place, the more seductive she finds it, but it may mean she’ll never leave. 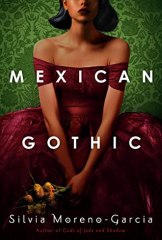 Manuela Azul is an undocumented immigrant on the run from her father’s Argentine crime-family. Her life is necessarily small until her surrogate grandmother is attacked and her mother is arrested by ICE. Lifelong lies are exposed, and Manuela discovers a deeper world where her real heritage leads back to an ancient cursed city. There, she finds that not only is her immigrant status is illegal- her very existence is, too.

In a city of ice and ruin, daring magicians face off in a competition to find the next leader of the Conquering Circus. But they soon find themselves under threat from an unknown enemy. As the acts becoming more daring and more magicians disappear, three of the magicians must reckon with their pasts before they disappear forever, too.

Among the Khana people in the city of Iyar, women venture out in caravans for trading, while men remain behind in the city’s center to work as scholars. One man struggles to settle into the masculine world after spending years in the women’s world as a trader, mother, and grandmother. As his past catches up to him, he must choose between his new life and Uiziya, an assassin on her own quest to find her aunt, discover the final secret of her order, and challenge the evil ruler of Iyar.

Severin and his friends have succeeded in thwarting the Fallen House, but the cost was higher than they could have imagined. Now they must pick up the pieces and push forward, for Severin has an agenda he is obsessed with and has set his sights on an artifact that grants its user god-like powers. The search takes them all to wintry Russia, where secrets come to light and force them to face themselves and discover new depths to themselves. 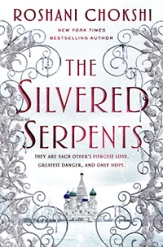 In 1914, the world is gripped by the Great War. There’s a story from the Western Front that St. George and a band of angels have descended from Heaven to fight with the British troops. But how can this possibly be true? Writer H.G. Wells is dispatched to find out the truth of the matter and finds himself in the midst of an eerie wasteland inhabited by the living, the dead, and those somewhere between. The unhappy souls trail Wells home to London, where he discovers a plot that could turn the tide of the war. Along with the love of his life, journalist and suffragette Rebecca West, Wells must do battle against diabolical forces to save his sanity– and the world.

Doctor Jens hasn’t had a decent cup of coffee in fifteen years, but she’s fine with that and with her job of jumping out of perfectly good space ships in order to develop new treatments for the alien species she encounters. But when she encounters two ships– one ancient, one new– locked together, with their crews suffering from some strange ailment, Dr. Jens can’t help but start digging into the mystery. She has no idea what sorts of horrifying truths she’ll find. 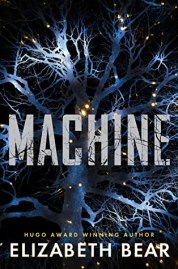 In the holy city of Tova, the winter solstice is usually a time of celebration. But a rare solar eclipse is predicted to happen, and the Sun Priest predicts that it heralds a time of unbalance in the world. Meanwhile, Xiala, a disgraced Teek whose song can calm the waters is captaining a ship bound for Tova. Her only passenger is a young blind man who seems harmless, but Xiala knows her stories. Those who seem harmless often turn out to be villains, and her ship is due to arrive in Tova on the Winter Solstice.

As of today, I have 45 approvals and have reviewed 38 of them for a feedback ratio of 84%. I have two titles waiting for approval (or not), though I requested one of them on January 1. I’m really wondering if the publisher has seen it at all. The book is due out in a week, so if I get an approval, the review will be late.

I have no real intentions of seeking more approvals for the summer, and I have plenty for the fall, so I probably won’t be looking at new titles. Unless there’s some day where I’m really bored and I don’t want to scroll through social media.