On my last full day in Iceland, I woke up early to gather my things, load up the car, and head west for the six and a half-hour drive back to Reykjavik. Given that I’m from the Great Plains where everything is far away from everything else, the length of the drive didn’t bother me. I was just hoping I would get back to Reykjavik in time to get dinner at my favorite restaurant and do a bit of shopping and wandering about before going back to my hotel to get some sleep before heading to the airport the next morning.

The day dawned fairly clear with just a few clouds here and there. It had recently rained, but the roads were dry enough and the light cutting through the clouds made for a beautiful drive, even if part of Route 1 outside of Höfn was gravel. I stopped once in the eastern region when the road curved to the north and a break in the clouds sent shafts of sunlight over a richly colored mountainside. 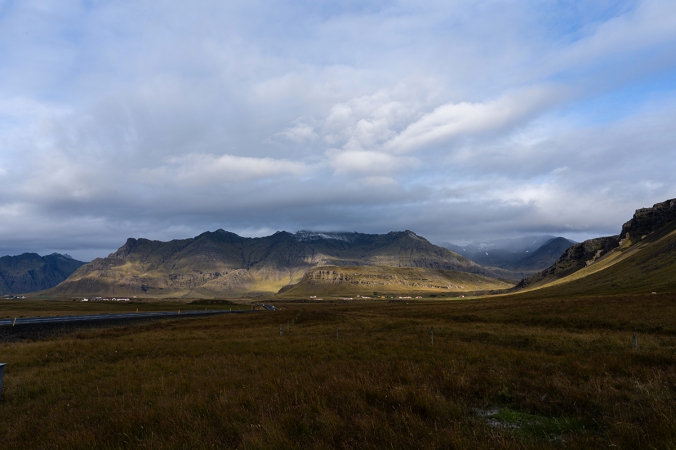 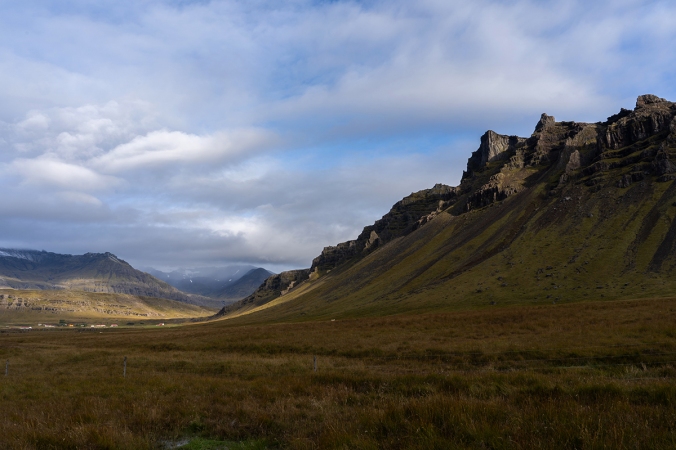 Though the road was long, I didn’t mind the journey. There were so many beautiful things to look at and personal landmarks I remembered from earlier adventures (like the rock with a tuft of grass growing on it that looked like a little old man with fuzzy hair). I was unable to photograph one of the coolest things I saw, which was a massive natural stone arch high up on a mountainside. I wondered what the early Norse settlers would have made of it, and if they told stories about it being a meeting place of their gods.

Though I briefly toyed with the idea of stopping at Reynisfjara one last time, while the wind and tide were low, I passed it by and instead stopped at Seljalandsfoss. I’d been there before, but when you have a chance to stop at one of Iceland’s most famous waterfalls, you might as well take it.

Seljalandsfoss is visible from Route 1. You take the indicated turn and can either park right away, or drive a little farther down the road, pay a minor fee for the parking lot, and walk right to the falls. Seljalandsfoss has a single drop of 200′ (60m), and you can walk around the entire thing, as there is a natural cave carved out by the water. Because there is always spray from the falls blown around by the wind, the path around the base is very slippery. You’ll want to wear a raincoat or have a rain poncho with you, and if you decide to take photographs there, you’ll also want a rain cover for your camera. 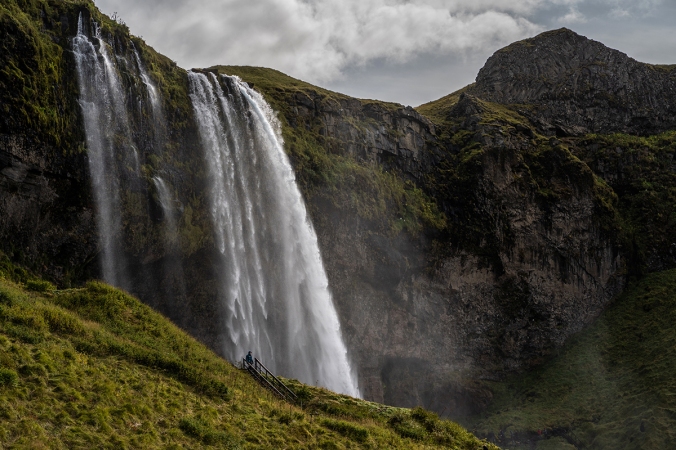 Once you’ve walked around the base of the falls, you can take the marked trail along the base of the cliffs to the north to find the hidden waterfall, Gljúfrabúi. Many people overlook this waterfall because of its nature: over the ages, it has carved itself a hiding spot within the cliff, and so is only partly visible from the outside. A narrow opening allows tourists to walk into the little cavern and see the falls themselves but said narrow opening can also cause human traffic jams when groups of people want to go in and out at the same time. There is a very narrow rock ledge that provides access without getting into the water. 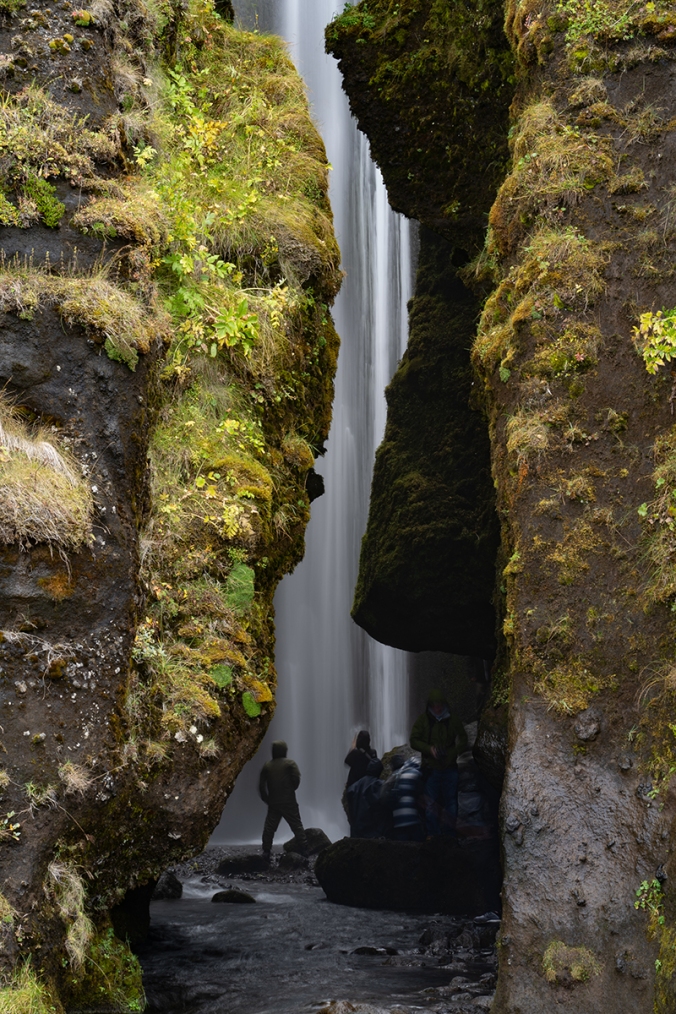 Visiting Seljalandsfoss as a photographer inspires as much frustration as it does awe. It’s one of Iceland’s most popular destinations, so there are people everywhere. Unless you want people in the shot for the sake of scale (like the first picture of Seljalandsfoss, there is a little person at the top of the stairs at the base of the falls so you can see just how big the waterfall is), waiting for someone in a neon pink coat to wander out of the scene can test even the patience of a saint. And sometimes, you just have to take the photograph, people and all, and hope for the best.

There are a few small waterfalls that, to my knowledge, have no names. They are between Gljúfrabúi and Seljalandsfoss. 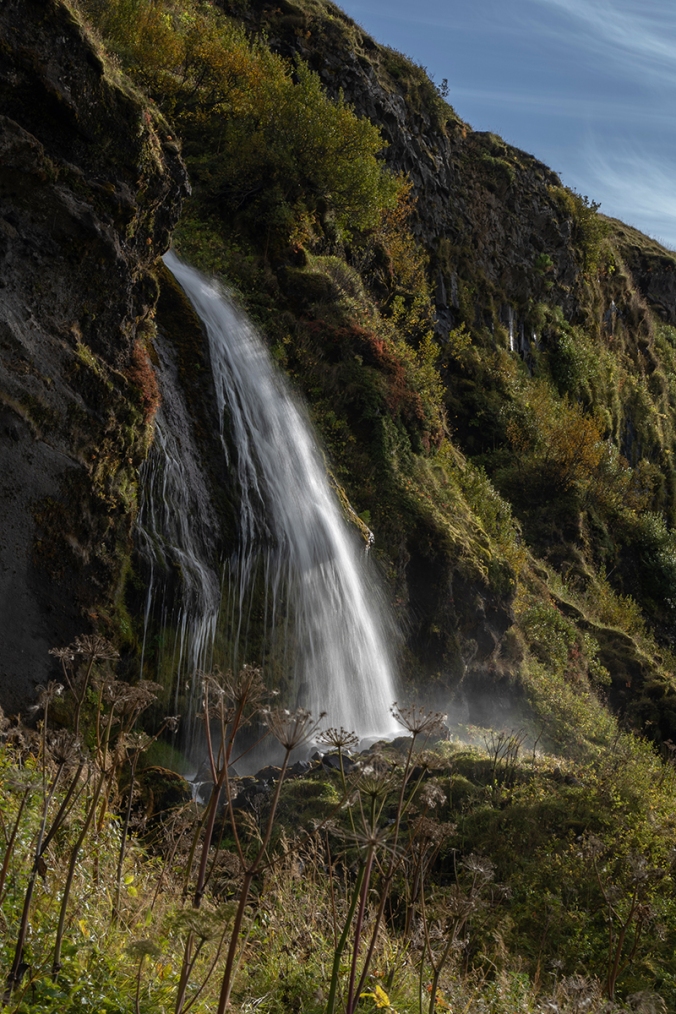 I would have loved to stay longer at Seljalandsfoss and spend more time photographing Gljúfrabúi, but when I looked at my watch I realized I needed to get back on the road. So I said my farewells to the falls, got back into the car, and turned west for Reykjavik.

Since I’ve gotten home, people have been asking me where I intend to go next. Sure, I have new destinations in mind– Banff National Park in Canada, Norway, the Faroe Islands. I’d love to go back to Scotland and visit the Isle of Skye and the Shetland Islands or return to Ireland and get farther outside of Galway. But more than anything, I want to go back to Iceland. Though it is roughly half the size of the state of Nebraska, where I live, there is a mind-boggling array of landscapes packed onto that one island. Mountains, glaciers, volcanic plains, the sand flats, black sand beaches, geothermal pools, and incredible waterfalls at every turn.

This isn’t to say that everything in Iceland is wonderful. Though the people are friendly, the land and weather are not. Earthquakes and the threat of volcanic eruptions are part of life there, and winter storms sweep across entire regions, potentially disrupting the flow of life for days. The massive surge in tourism since 2008 has caused its own problems, too. But there are few places I have traveled to where I have felt more content and more connected with the world around me, whether I am standing at the base of a massive waterfall, standing with my back to a 30mph wind while watching fifteen-foot waves break over a black sand beach, or simply eating an ice cream cone at a picnic bench on a quiet fall day.

I texted a friend while I was in Höfn and suggested that someday, she and I should come back to Iceland and explore the interior of the country. She is a veteran traveler with off-road driving experience, and when she got back to me, her answer was an enthusiastic Yes!. So someday, whether that adventure with her happens or not, you can bet I will return to Iceland. There is so much of the country I have yet to see and many adventures ahead of me.