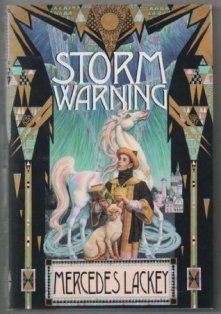 First things first. The Iron Throne. You know the one. It’s massive and made of the weapons of defeated enemies. People play the long game of cutthroat politics to have a chance to attain this throne. And while we’ve just spent eight seasons debating who would eventually sit on that throne, I’m sorry to say that it’s not a Stark, a Targaryen, a Lannister, or even a Baratheon on this particular Iron Throne. It’s Emperor Charliss of the Eastern Empire*. But that throne sounds awfully familiar, right? Sounds like Mercedes Lackey ripped off one of George R.R. Martin’s ideas, right?

With Storm Warning, we begin a new page in the history of Valdemar. With the aid of unexpected allies, Valdemar has won a long war. The land and its people have been depleted by all the fighting, but another threat looms in the distance: the Eastern Empire. Thanks to a power vacuum in neighboring Hardorn, imperial forces have been sweeping through the countryside, and there is no one there to push them back. Queen Selenay of Valdemar can only gather her new allies and hope they can hold off the Empire.

For centuries, the theocracy of Karse has been Valdemar’s worst enemy, with border wars flaring up every couple of decades and Karsite religious doctrine that has consigned many Heralds to the flames across the years. Thanks to a religious revolution, however, those centuries of enmity came to an end almost overnight. At the dawn of a new era, the Karsite sun priest Ulrich and his teenaged secretary Karal arrive in Valdemar to represent their country and find common ground with their longtime enemies. While everyone assumes that their biggest problem lies just beyond the border with Hardorn, they soon discover that they face an even greater threat. One that could wipe all the lands off the face of the world.

With Storm Warning, there is a distinct change from Lackey’s previous books, which were plagued by uneven pacing, odd characterizations, and often disturbing sexual dynamics. In this book, our main character is Karal, a sixteen-year-old acolyte of the Sunpriest Ulrich, the Karsite envoy to Valdemar. Karal is an intelligent boy with a mundane background, and in the span of seven years has had his world repeatedly turned upside down. Because he is young and inexperienced, he’s often in over his head, but thanks to the flexibility of his youthful mind, he manages to somehow land on his feet. He is a genuinely good person who wants to do good, but unlike previous Lackey protagonists, he doesn’t have magical powers that grant him unique abilities. He can’t call lightning or sense thoughts or emotions. He’s an ordinary kid just trying to do the right thing while surrounded by people and events much greater than he is.

Karal’s ordinariness is what makes him so appealing to me as a character. He’s long been my favorite, and though I hadn’t reread many of Lackey’s books until this year, I’d reread that Mage Storms trilogy many times, especially during college. Talia had her mind-gifts, and Vanyel and Elspeth had their mage-gifts, and while their stories were interesting, they’re not the easiest characters to relate to. But Karal? Yeah, I can relate to a bookish teenager from the countryside who grew up in a religious household and lived a fairly ordinary life until the world up and changed around him.

Karal is a simple person, and that’s not a bad thing. Unlike other Lackey protagonists, he doesn’t look to the horizon and wonder, “What’s out there in the great wide yonder?”. He is satisfied with what he has and doesn’t seek after greater things. Given what our opinion of Karsites has been for the past several books, this characterization was a stroke of genius on Lackey’s part. She made the most relatable person she could come up with hail from the land we always thought was full of bad guys. Sure, Karal is from Karse, but he’s the kindest, most helpful kid around. You want him to succeed.

Though he is the main character of the Mage Storms books, Karal is not the only viewpoint character. We meet Grand Duke Tremane, a general from the Eastern Empire who seeks to become the heir to the Iron Throne, and we see more from An’desha now that his spirit has been freed from the clutches of the evil Mornelithe Falconsbane. Each viewpoint character has their own particular motivations and characteristics, and their perspectives are clearly defined from one chapter to the next.

My primary issue with Storm Warning comes from the pacing. The book is a bit slow to start, though that’s not the worst thing. As Ulrich and Karal travel from the Karsite border to the Valdemaran capital city of Haven, we get to find out what Karal’s background is and how the revolution happened in Karse while everyone’s attention was on Hardorn. The most egregious pacing issues happen toward the end of the book when several critical story elements are plopped down and largely resolved within single chapters. They could have been fleshed out a little more to make them less episodic and more a part of the greater story. I would not have begrudged Lackey an extra twenty to fifty pages to make that happen, but alas, these incidents begin and end abruptly. It’s a fairly minor complaint overall and doesn’t lessen my enjoyment of Storm Warning. It has been a long time since I last read these books, and now that I’m revisiting them, I remember why I liked them so much. In a world where some people are granted incredible magical powers, it is still possible for ordinary people to do extraordinary things.

*I was going to make an annoyed remark about Lackey naming the empire in the east the Eastern Empire, and then I realized that humans are terrible at naming places. I mean, England essentially means ‘Land of the Angles’ (as in Anglo-Saxons). And then my German tutor, while going over the names of countries, informed me that the German name for Austria is Österreich, which basically means, ‘Eastern Realm’. So now I want to think of the Eastern Empire as Austria… Definitely not the same thing.